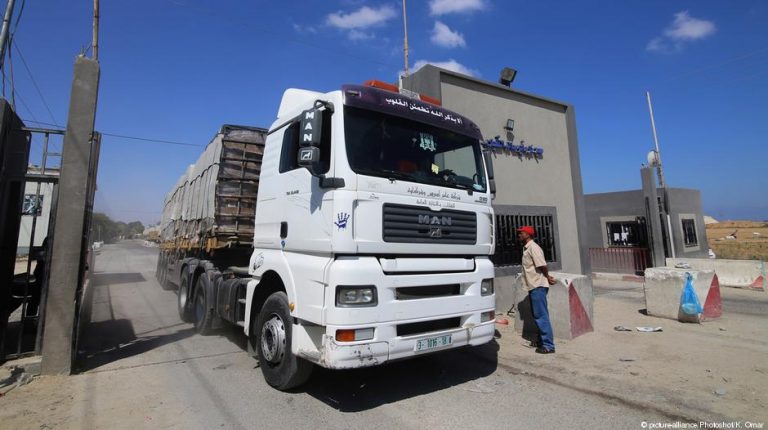 Israel has closed its only cargo crossing with the Gaza Strip, preventing fuel deliveries to the Palestinian enclave. Authorities say it’s in retaliation for a wave of firebomb-laden kites sent over the border.Israel has blocked all fuel and gas transfers through the Kerem Shalom crossing with the Gaza Strip, Israel’s defense ministry said Tuesday.

The measure will apply until Sunday “in light of the continued terror efforts of Hamas,” but essential food and medicine deliveries will still be able to get through, the Ministry of Defense said.

Israel is seeking to increase pressure on Hamas, the Islamist militant group that rules Gaza, following a series of incendiary balloons and kites that have sparked damaging fires on Israeli farms after being sent over the border.

Read more: Gaza war is over, but struggles continue

Israel also said it had tightened its naval blockade to cut the Gaza fishing zone from six nautical miles to three.

Kerem Shalom is the only crossing between Gaza and Israel for the transportation of goods. Its partial closure will likely worsen the plight of the 2 million Palestinians living in the enclave, which is already facing severe fuel, electricity and water shortages.

Last week, Israel closed the crossing to commercial trade, a move Hamas denounced as a “crime against humanity.”

Read more: Hamas official on Gaza bloodshed: ‘Not expected to be like this’

The tightened restrictions follow months of clashes and Hamas-staged protests along the Israel-Gaza border.

On Saturday, Israel launched its heaviest bombardment since the 2014 war, striking what it said were militant targets in the Gaza Strip. Dozens of rockets were also fired from Gaza into Israel. Two Palestinian teenagers were killed, while four Israelis were wounded.

Hamas agreed to a ceasefire late Saturday. But Israel says fire-starting kites have continued to drift across the border. Many Palestinians in Gaza view the kites as a legitimate form of resistance against the Israeli blockade, which has been in place for more than a decade.