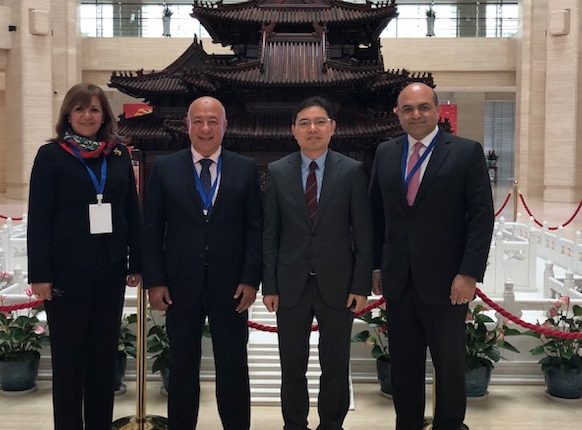 The National Bank of Egypt (NBE) signed an agreement in the Chinese capital, Beijing, on Thursday, with the China Development Bank (CDB), First Abu Dhabi Bank, Fransabank, and BMCE to establish a China-Arab Countries Inter-Bank Association.

The association, which is the brainchild of the CDB, aims to enhance China-Arab cooperation across the different fields, as well as promote cooperation between member banks in various economic sectors, particularly in the areas of energy, infrastructure, and industrial development. This will be carried through by identifying projects of mutual interest and providing the required financing support to key projects in China and member Arab countries, according to El Bialy.

She explained that this new forum will also solidify the long-standing partnership between China and Egypt and strengthen growing ties between China and the member Arab countries in the framework of the Belt and Road Initiative, which will reflect on developing the economies of the member countries.

During his speech, Aboul Fotouh indicated that the establishment of the association marks a new milestone in the relationship between China and member Arab countries and will efficiently lead to the advancement of the Belt and Road Initiative, as well as positively contribute to the economic development of member countries.

He pointed to the NBE’s presence in China since 1999 starting as a representative office, making National Bank of Egypt the first Egyptian and African bank in China.

“This presence stems from the historical political and economic relationship between China and Egypt and points to the NBE management’s early recognition of the strong prospects of the Chinese economy and the pivotal role it plays globally,” said, adding, “This presence has since grown to a branch in 2008 and, in late 2017, was awarded the RMB license; thus, positioning the NBE to play a key role in enhancing trade activity between China and Egypt on one hand and China and Arab and African countries on the other.”

Aboul Fotouh also emphasised the ongoing and strong partnership the NBE enjoys with the CDB, dating back to 2012 and which has positively impacted both their institutions and their countries.

He concluded his speech by extending his thanks and appreciation to the CDB for taking this initiative and to the participating banks who had the vision to be founding members of this association and wishing all members all the success in achieving the stated goals of the association.