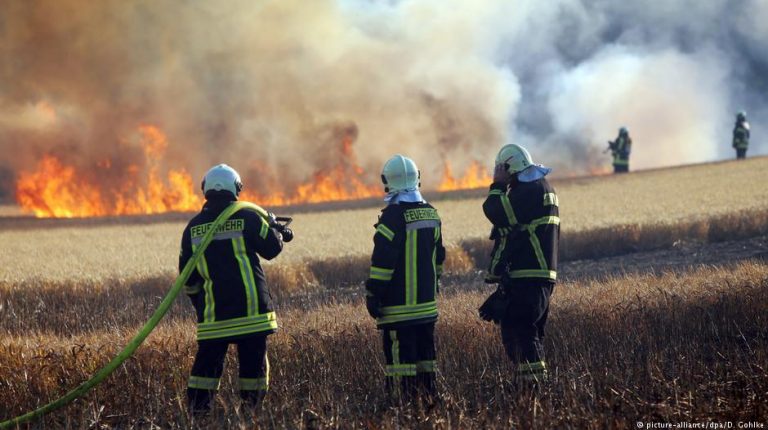 A heat wave is ravaging countries around the world. Although many celebrate sunny days, wildfires, wasted crops and health problems are some of the many disastrous consequences hot weather can have.Most of us enjoy sunny days and complain on rainy ones — yet behind the clear skies lies a less pleasant reality. Since June 2018, numerous regions around the world have been facing infernal temperatures, which have caused wildfires, ruined crops and, sadly, killed hundreds of people.

The hottest year ever recorded was 2016, due to a combination of global warming and a strong El Niño episode. Despite 2018 experiencing the opposite climate event, La Niña — which tends to cool temperatures — June has ranked as one of the hottest months on record.

A heat wave describes a period of at least five days with a temperature of 5 degrees Celsius (9 degrees Fahrenheit) above the average.

Extremely hot individual days can be a one-off, which doesn’t always have a link to heat waves or global warming.

However, a trend is clear: As a result of climate change, we can expect more extreme and frequent heat waves. Clare Nullis, media officer World Meteorological Organization, confirmed this to DW.

For a south European person, 30 degrees Celsius (86 degrees Fahrenheit) is nothing special. But that definitely is hot for people in the United Kingdom and Ireland, where the normal temperature in June doesn’t exceed 20 degrees.

On June 28, Glasgow reached its hottest June day ever, with 31.9 degrees Celsius, and the Irish town of Shannon its highest temperature ever recorded at 32 degrees.

Germans have enjoyed — or suffered — temperatures above 30 degrees Celsius for most of May and June. In the country of Georgia, July 4 made history with 40.5 degrees Celsius.

North America has not escaped the suffocating wave either. Denver and Los Angeles were among several cities in the United States that tied or broke heat records.

Montreal, in Canada, recorded the highest temperature in 147 years of record-keeping on July 2. The heat wave there killed more than 70 people.

Thermometers in Japan, Russia and Algeria, among other places, were also on fire. On July 5, the Ouargla weather station in Algeria’s Sahara Desert reported the highest reliable temperature ever recorded in Africa: 51.3 degrees Celsius.

In a climate change scenario, extreme heat waves may occur “as often as every two years in the second half of the 21st century,” Vladimir Kendrovski, technical officer for climate change and health for the World Health Organization (WHO) regional office for Europe, told DW.

Too hot to survive

“Heat waves have caused much higher fatalities in Europe in recent decades than any other extreme weather event,” Kendrovski pointed out.

High temperatures increase the level of pollutants in the air, as they speed up the rate of chemical reactions. This increases the risk of cardiovascular and respiratory diseases. Substances like pollen, which can cause asthma, are also higher in extreme heat, WHO said.

Vulnerable groups such as young children and the elderly suffer the most, Simone Sandholz, associate academic officer at the United Nations University’s Institute for Environment and Human Security, told DW. Most victims of extreme heat live in densely populated urban areas, where ventilation is scarce, she added.

Heat and humidity form a particularly deadly combination for humans, Nullis said. Up to 70 people may have died in Montreal as a result of the persistent heat wave and high humidity. In a recent three-day weekend, 14 people died in Japan, while more than 2,000 were sent to hospitals for heat exhaustion or insolation.

Hot weather coupled with humidity is also a perfect setting for insects to thrive. In England, helpline calls for insect bites almost doubled in early July.

But this is particularly worrisome for countries vulnerable to diseases such as malaria or dengue — that is, vector-borne diseases — transmitted by the bite of species such as mosquitoes, ticks or blackflies.

“Vector-borne diseases are associated with climate change, due to their widespread occurrence and the vectors’ sensitivities to their environments,” Kendrovski said. Mosquitos like Aedes aegypti are spreading into new regions due at least in part to rising temperatures.

And if you’ve ever felt it was so hot your brain doesn’t work, science says you could be right. Hot weather can make your thinking more than 10 percent slower, a new study shows.

Another study in New York City schools suggested that “upwards of 510,000 exams that otherwise would have passed received failing grades due to hot temperature, affecting at least 90,000 students.”

Wildfires are another sad result of unusually sunny days, and lack of rainfall has caused large fires in the UK, Sweden and in Russia, where 80,000 hectares of forest have been devastated this season.

Farmers and crops are further victims of heat waves and droughts. In the UK, growers of peas and lettuce have struggled to meet demand due to low yields and crop failure this growing season; wheat, broccoli and cauliflower are also on the list of crops affected by the weather.

In Germany, farmers have resigned themselves to a much lower grain harvest due to the heat and dryness.

“We will again have a harvest that is far below the average,” Joachim Rukwied, president of the German Farmers Association (DVB), said in a statement. Some farmers have opted to destroy the crops instead of trying to harvest them, he added.

Access to air conditioning and cooling systems, though vital in a warmer world, can be part of a vicious cycle. Increasing use of cooling devices, currently powered largely by fossil fuels, would further contribute to climate change — and therefore rising temperatures.

If health systems were better prepared and coordinated with meteorological systems, health problems from heatwaves and hot weather could largely be prevented, Kendrovski points out. “That’s the good news,” he said.

Sandholz highlighted the role of adequate urban planning to reduce heat impacts in urban areas. Simple changes, such as building out green zones or creating wind corridors, could make a huge difference.

We should not understimate the heat, Sandholz concluded.

Deaths related to heat waves could expect to rise by 2080