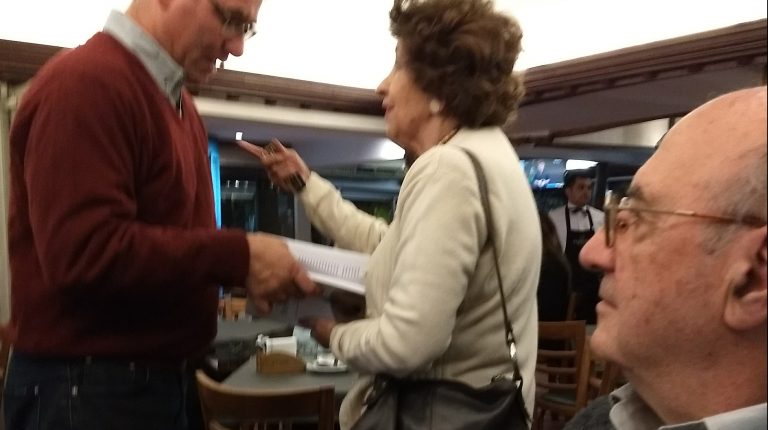 Unexpectedly, a casual incident brightened my life. It was one of the most interesting meetings I had during a recent trip to my native province, Tucumán, located in the north of Argentina. There I met Roberto Espeche, a local notary with a fascinating life history.

I met Roberto when I was in a restaurant with some friends. At one point, a tall man wearing glasses and a smile, walking, and talking with some difficulty, approached the table. When my friends introduced us, the first thing he said to me was, “Do you want to buy my book?” Disoriented by such frankness, I only managed to sketch a negative response. Unperturbed, he continued, “It does not matter. I give it to you as a present. Somehow, I’m going to get my money back…” Later that evening, Roberto and I were having dinner together at a nearby restaurant. It was a great dinner, with delicious dishes, and accompanied with a very good French wine. Of course, I paid the bill.

That day, and in later days, between talks with him and with other friends, I was able to reconstruct his history. Roberto was born in Tafí Viejo, a small town near the city of San Miguel de Tucumán, the largest city in the northwest region of Argentina, and the capital of the province of Tucumán.

From his childhood he was a very good student and in elementary school he became a standard bearer representing his school group. His life passed without major incidents until on 28 June 1986, when he was only 13 years old, he had an accident that would turn his life around.

In a hurry to get to a training session at his rugby club, he ran out of his house when trying to pass in front of a bus; he was hit by a neighbour’s car. She was terrified and thought she had killed him.

Roberto was taken to a sanatorium where, three and a half months later, he was discharged and was able to return home. He had suffered multiple injuries, from which it took him years to recover. For more than a decade he carried out rehabilitation sessions for basic functions, such as walking, maintaining balance, recovering fine motor skills, and speaking without major inconveniences. However, the injuries in his brain caused a loss of his inhibitions, which sometimes caused, even now, difficult social situations.

Years later, fate would again put him to a test. His beloved daughter Martina, one year old, had a very serious accident, where she almost drowned. The accident, however, left her with neurological lesions even more serious than those her father had suffered. It seems that his experience had prepared him to be able to help his daughter reintegrate into family life—very important for her recovery. Roberto, with commendable integrity, did not cease his efforts in trying to help her.

All these trying events generated in him the need to relate all these experiences in a book. He counted on this with the extraordinary collaboration of Jorge Daniel Brahim, editorial director of the magazine El Pulso Argentino. The result was “With Perseverance: My Life as History”, a book where his passage from darkness to light was appropriately reflected. More than 6,200 copies of his book have already been sold—an extraordinary figure if one takes into account that they are the result of Roberto’s personal efforts and his great talent as a salesman. Moreover, a more complete third edition has already been printed.

I witnessed Roberto’s ability as a salesman when, on one occasion, we were having coffee in Las Palmas, a downtown restaurant. Roberto, as always, had a backpack with several copies of his book. At short intervals he would get up from our table and offer his book to new clients when they entered the restaurant. At a certain moment, I saw a couple come in whom I thought were professionals, since they came loaded with several books. I then said to Roberto, “Look, Roberto, that couple seems to be potential clients for you.” Immediately, he answered me, “Don’t worry for me, César. I am an insatiable salesman. I am like a shark; when I smell blood, I know exactly how to attack my prey.”

Another recent incident confirmed Roberto’s tenacity in selling his books. Some friends in common told me how, on one occasion, Roberto lost his balance and fell backwards to the ground. His editor tried to lift him from the floor without being able to do so. A passer-by who saw the scene approached and tried to help in lifting him. For a few dramatic seconds, Roberto seemed to have lost consciousness. As he opened his eyes, as soon as he saw a new and strange face, the first thing he said was, “Do you want to buy my book?”