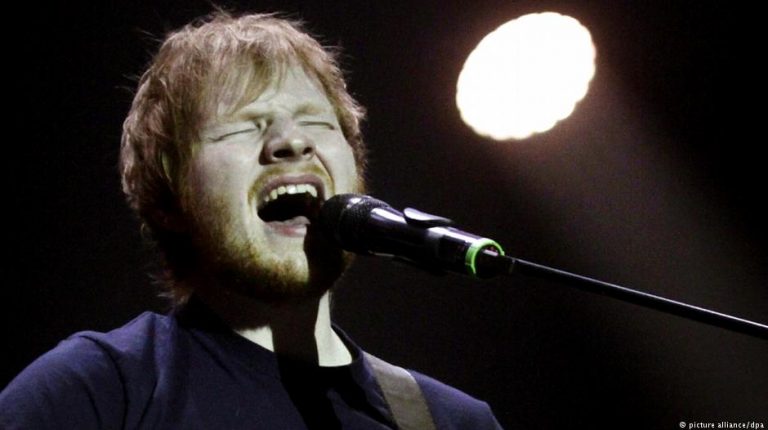 At only 27 years old, he has smashed sales records and won not only a swathe of prizes but a royal distinction. How to explain the Sheeran phenomenon as he embarks on yet another packed stadium tour?The downbeat on July 19 in Berlin’s Olympic Stadium: 75,000 seats, sold out – followed by concerts in Hamburg, Munich and Gelsenkirchen – among 25 stops in Ed Sheeran’s storming of stadiums and other open air venues across Europe.

In January 2017, Ed Sheeran was the first artist ever to enter the singles charts simultaneously at the No. 1. and No. 2 spots. That was for the songs “Shape of You” and “Castle on the Hill” – and in four countries: England, Germany, Austria and Switzerland. “Shape of You” was streamed 1.4 billion times on Spotify in 2017. When his third album “Divide” appeared there, it was streamed 57 million times on the first day alone – another record.

“Divide” was the best-sold album by a male artist in the first week after release. He was the first artist to occupy all five top spots of the British singles chart. In 2017, he had 16 songs in the Top 20. The six songs in the Germany’s Top 20 set a further record.

A Grammy for his breakthrough song “Thinking Out Loud,” several Echos and an array of other prizes and distinctions are among the 27-year-old’s achievements.

On Ed Sheeran’s current tour, the concert goers’ names are printed on the tickets to counteract the black market and its exorbitant prices. His shows are clearly in high demand.

In 2017, Prince Charles honored the British artist for his music and charitable activities, naming him a “Member of the Most Excellent Order of the British Empire.”

Since Ed Sheeran’s days as a street musician, performing over 300 concerts in London in 2009 yet without a home of his own, he’s come a rather long way.

In 2010 he moved to Los Angeles, was taken under the wing of Hollywood star Jamie Foxx and built fan bases on YouTube, Facebook, Twitter and Instagram that have remained loyal to the present day.

Young girls swoon over the redheaded bard – but that alone cannot explain his success.

With his nice-guy image, Ed Sheeran seems all authentic and genuine. His unspectacular appearance is his trademark. “I’m a singer that you never wanna see shirtless,” he sings.

That fits the picture of an original songwriter who owes a debt only to his own inspiration – an image that has been clouded by court cases over alleged plagiarism.

In a quick survey of DW colleagues, the question “What do you think of Ed Sheeran?” yielded a variety of opinions ranging from “His four-chord hits work better than sleeping pills,” to “He makes a damn catchy tune.”

One colleague feels that Sheeran has “produced nice, sentimental songs I enjoy hearing on the car radio,” and another sums it up, saying: “His fame is justified in as far as what he does, he really knows how to do.”

Nearly everybody has an opinion about Ed Sheeran. That alone says something about his status.