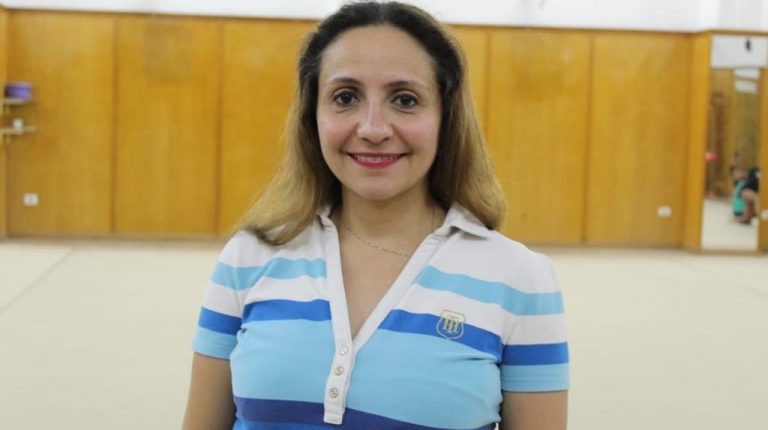 When discussing the women’s history and their achievements, people often forget the contributions of sports and women athletes to the social and political emancipation of women, especially when it comes to the women games, such as the rhythmic gymnastics.

Today remarks the birthday of one of the most important female gymnast that was elected by the whole counties of the FÉDÉRATION INTERNATIONALE DE GYMNASTIQUE (FIG), International Federation, to join it, due to her work, breaking the normal of the federation, becoming the youngest one in its history to join it at the age of 28 years old, along with being the first Arab African, Egyptian women to become vice president of the technical committee in the FIG.

Daily News Egypt sat down for an interview with Noha Abdel Wahab, president of the technical committee in the Egyptian gymnastics federation and vice president of the technical committee in the FIG, to learn more about the game, why it is not appreciated enough by the public, how did she reach this amazing position, etc. The transcript for which is below, lightly edited for clarity:

In depth, let us know how you achieved position of vice president of technical committee in FIG?

My journey started with the Rhythmic Gymnastics in 1987, when I joined a gymnastics school then I became the Egyptian national champion, and participated in many international, African championships, and at International camps.

Moreover, I introduced rhythmic gymnastics in some Arab Countries, including, Syria, Qatar, Morocco, and Tunisia. The journey did not end there, but I was chosen also as the president for the Egyptian gymnastics federation technical committee.

After that, I decided to enter the elections of the FIG, and I won the elections in 2008, becoming the first Egyptian Arab woman to join the FIG and also the youngest one in the FIG`s history to join it at the age of 28 years old.

Since joining the FIG, I decided to resign from the bank where I was working, in order to focus only on the rhythmic gymnastics and to prove myself in that new position.

After that, I won the international federation election twice in row in 2012 and 2016 cycles with the highest votes, becoming FIG rhythmic gymnastics technical committee first vice president.

You mentioned that you resigned from banking career in order to focus only on rhythmic gymnastics; what was your family’s feedback? Did they support you in your decision?

Was it your goal or your dream from very beginning to enter FIG?

No, I remember that after my marriage, my father-in-law asked me what are my aspirations in rhythmic gymnastics and I told him I hope to join the FIG at the age of 55 or 60.

Notably, that all the members in the FIG rhythmic gymnastics technical committee with me are at the ages of 70s, hence I would never have thought that I would enter the FIG at the age of 28.

What were some obstacles that you faced?

I should mention that in the election of 2016, all the concerned bodies in Egypt supported me with all their capabilities. 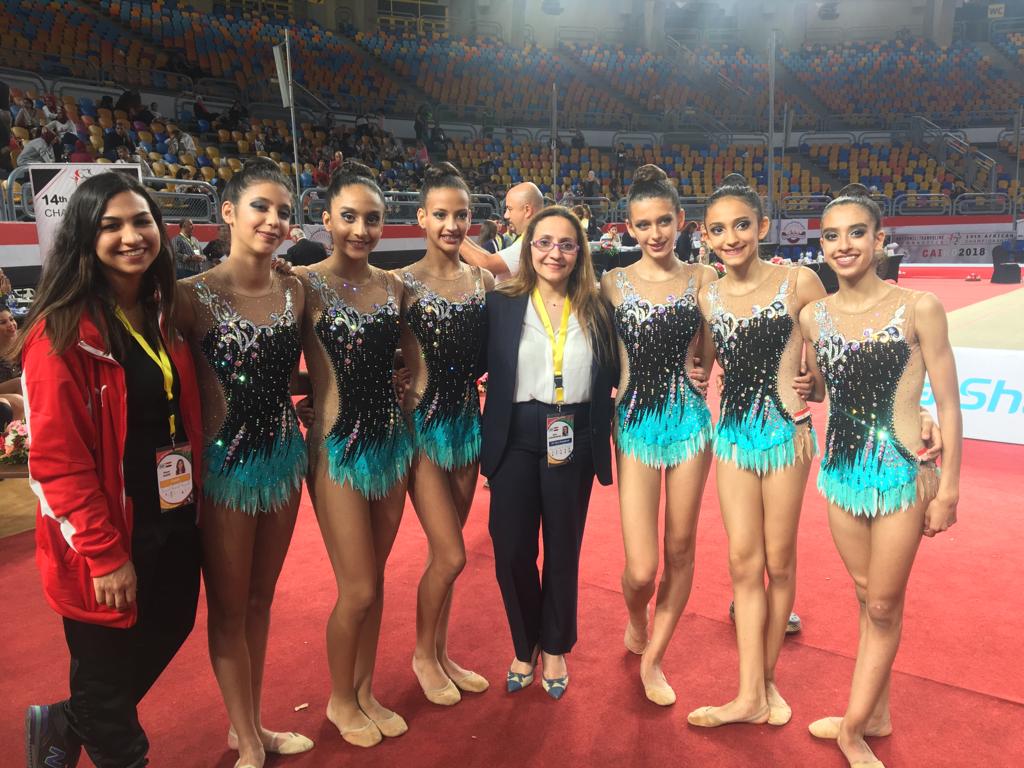 I benefited from the both places, the two positions made me stronger, but my presence on the table of the FIG made me another personality, it made me more patient, listen more than talk and gave me the opportunity to see the system from higher level, starting from supporting the champions to how to be able to serve all the people and countries either they are poor countries, have lower population whatever their problem, while in the Egyptian Federation I witness a smaller scale.

In terms of the second question, it benefits in having stronger international relations with the other countries, they support us if they have capabilities, they sometimes bring to us judges if we need in championships.

Could you please, illustrate difference between artistic and rhythmic gymnastics?

Notably, an apparatus used in artistic gymnastics is a set piece for its own event, on which athletes climb, balance, and manoeuvre to show off their skills.

On the other hand, the rhythmic gymnastics routines are all performed on the floor 14×14, while using various types of apparatuses. All routines are performed to music.

Meanwhile, rhythmic gymnasts extend their movement and dance with the use of ropes, hoops, balls, clubs, and ribbons.

Rhythmic gymnastics is scored on elements, such as use of space, body language, and synchronicity with music.

On a separate note, each two years the FIG, change the tools that the gymnasts use. 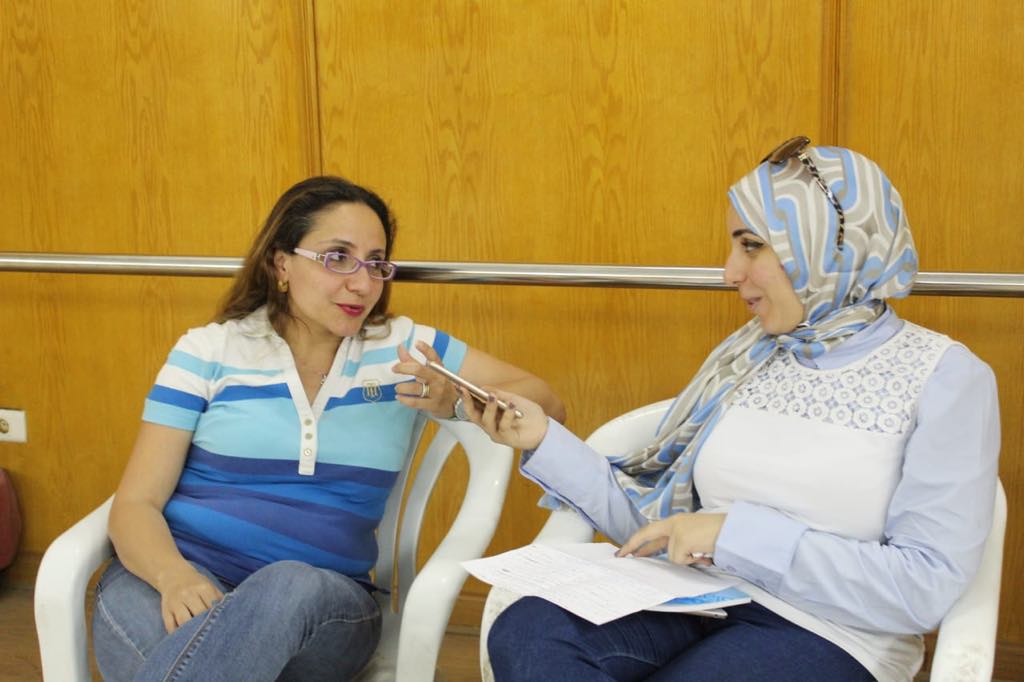 When people talk about gymnastics, they always say that it is not appreciated enough by public, why?

Firstly, as it is an individual sport, and it is not the most popular or the first sport in Egypt.

Notably, any individual sport does not take enough rights in the preparations.

It is important to mention that the sport itself is expensive, whereby the parents have a great responsibility in the funding of the clothes, and tools, until the gymnasts join the national team then the federation supports according to its capabilities.

But at least, until one has reached a certain age to join the national team, one will find that a lot of money is being spent on training.

In your opinion, where does Egypt stand now from rhythmic gymnastics` world map?

We have great achievements in group category at the tournaments of different levels, as Egypt obtained the silver medal in the 2010 Summer Youth Olympics in Singapore.

Meanwhile, Egypt’s Rhythmic Gymnastics` team reached the Olympics for the first time, becoming one of the world top 20 teams, but we are trying to become among the world top 12 or 15 teams.

We are also the African champions on both the individual and the group category.

On a separate note, this year’s world championship is the first qualifying for the Tokyo 2020 Olympics and Egypt participate also in it.

On the other hand, on the individual category level we are ranked among the world top 50, which is lower than our rank in the group category level. 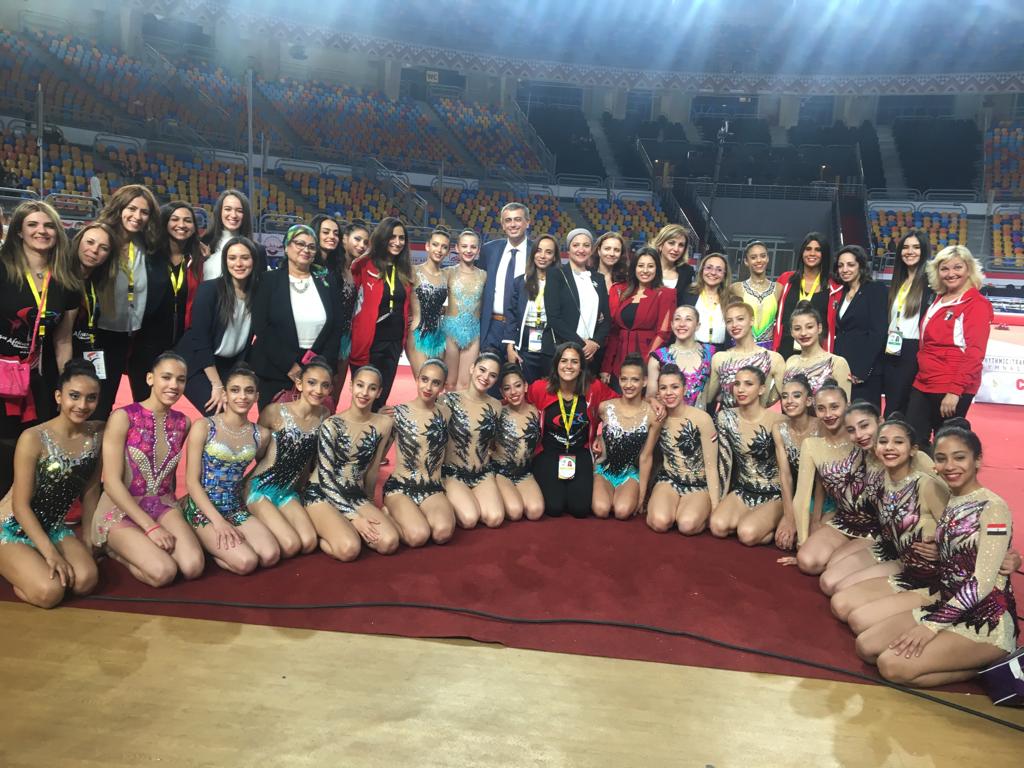 hey always say that group effort or team work is more difficult than working or competing alone, in your opinion why Egypt is better in group category than on individual level?

As in the individual category, the countries play by two or three girls, and in the finals only the best two gymnasts from each country play, so Egypt has a lower opportunity to become among the world top 24 teams, as it competes with two from Russia, two from Bulgaria, two from Georgia, two from America, etc.

What are obstacles that impede Egypt’s competition on an international level? And how can they be faced?

First that the education does not support sports; this means that the athletes go to their schools then come to have their training, so the period of the training is very short.

On the other hand, the education supports the sports in other countries that the girls receive their education classes in the training place.

I think that there must be amendments in the athletes` system of the state, in order to be able to compete in the international level.

Finally, I hope to see a school for the female athletes that will provide the education for the talented and athletic girls.

What is your opinion about cancelling participation of group category in youth Olympics?

The international Olympic committee said that it is not a way for the competition to have five teams, each team represented a continent, which means having one country from each continent and that there would be one girl representing the whole continent. They are limited with specific number or quota for each sport, so they cannot increase the quota of the rhythmic gymnastics, hence they decided to distribute the quota of the sport on other sport, such as trampoline and aerobatics, that were not considered a discipline in the Olympic games.

Concerning my opinion, the group category is part of rhythmic gymnastics, and is considered as a discipline in the Olympic games, that is what I think, we can make negotiations with the current new president of the International Olympic commission to discuss other ways to keep the group category in the youth Olympic games, such as for example, choosing the world top 10.

Are these negotiations available in Egyptian Federation’s plan?

In your opinion, why rhythmic gymnastics is not available in all Egypt’s sports clubs?

In contrast, the other games including, volley ball, handball, basketball, etc, can be played in the same hall, with replacing the setup depending, in which a sport will be played, so due to these reasons many clubs do not prefer to offer training in rhythmic gymnastics.

In your opinion, why are rhythmic gymnastics athletes are concentrated somehow in Cairo rather than other governorates?

As Cairo has much more clubs than other governorates, due to it is population there, but I think that there is now a high competition between Alexandria and Cairo, since Alexandria also has super star athletes.

Concerning clubs, what are most notable ones that train rhythmic gymnastics in Egypt?

What are obstacles that face gymnasts in general?

As the girls are from different schools, with different timings, it is always difficult to put a fixed early timing for the training, which prompts us to schedule the training at 5:00 pm or 6:00 pm.

Notably, the courtiers abroad give their teams training for a period of eight hours, in which they take four hours of training early in the day, then they take a break then take another four hours in the middle of the day.

In contrast, gymnasts in Egypt, take only a training for four of five concentrated hours, as we always wait until they finish their school day, noting that after finishing school, they become tired from waking up early, working throughout a long day at school and also, they become tired from traffic itself, which eventually, turns their day to be always difficult and long.

They also face difficulties in nutrition, as they should always practice healthy eating habits, as gymnasts should always be graceful.

In contrast when gymnasts go to their schools, they see their friends eating whatever they want, not practicing healthy eating habits and leading a less restraint lifestyle.

What role does Egyptian Gymnastics Federation play in facing these obstacles?

We always try to compensate in the summer vacations that we give gymnasts extra training through a training centre for the team, in which they have training with the trainers of the national team.

And through bringing experts to learn from them, as well as having more championships, and participating in more international camps.

In terms of nutrition, we always talk with them about the benefits of having healthy eating habits, in addition to delivering to them the message that their life is different from the lifestyle of other people; they are not deprived from eating, but they should maintain the healthy eating habits.

Finally, what are your aspirations?

I have many aspirations but, I prefer to take it step by step, in the sooner time, I hope to serve all the countries that played rhythmic gymnastics in the world. I always feel that I am a mother for all the gymnasts across the world.

In addition to that, I hope to reach higher positions in my career.

Hassan Fahmy ‘the annoying fan’: My dream is to become a singer, I am a camera addict