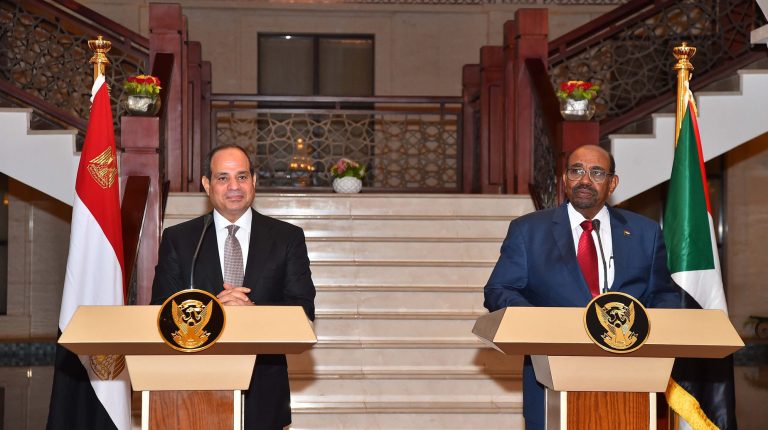 President Abdel Fattah Al-Sisi expressed on Thursday Egypt’s keenness regarding its relations with Sudan and upgrading the level of relations in order to meet the ambition of the people of the two countries towards peace, stability, and development.

During his meeting with his Sudanese counterpart Omar Al-Bashir in Sudan’s capital Khartoum, the two leaders discussed increasing the economic cooperation between the two countries regarding infrastructure, transportation, and flora production, according to a statement from presidency spokesperson Bassam Rady.

Rady added that the two leaders agreed on forming a committee that would be presided by the ministers of foreign affairs from the two sides to discuss and suggest certain scheduled projects that benefit the two countries. The summit also addressed the updates on the regional issues of mutual interest.

During a press conference following the meeting, Al-Sisi said that the work on the project of electric connection between Egypt and Sudan has begun. He also added that his visit comes in frame of the full coordination between the two countries to support their strategic interests, including water security. The president praised Al-Bashir’s efforts in solving some regional conflicts, including his efforts to end the conflict in South Sudan, and pointing out the successful efforts for ending tensions between Ethiopia and Eritrea.

For his part, Al-Bashir described Al-Sisi’s visit to Khartoum as historic, saying that his country is keen on upgrading its ties with Egypt to strategic relations in all fields after “wasting years in other issues.” He added that there are studies to connect the railways in the two countries, as well as removing all obstacles in the movement of individuals and goods.