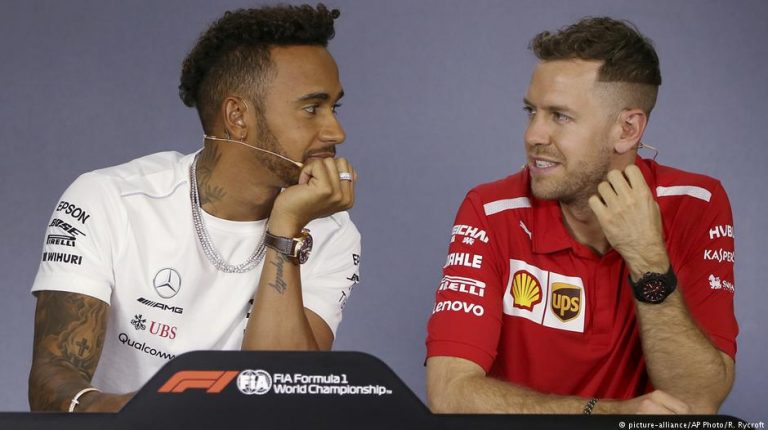 The 2018 season is shaping up to be Sebastian Vettel’s best chance yet to win a title in a scarlet Ferrari. That said, Mercedes are hot on his heels despite having had the lion’s share of misfortune this season so far.For all the usual melodrama and moaning in the paddock, there’s a genuine sense of excitement around F1’s drivers’ championship title race this season, after several years with Mercedes looking untouchable at the top.

Two, sometimes even three teams are in with a genuine shot at race wins each weekend. The championship is threatening to be the closest since the head-to-heads between Nico Rosberg and Lewis Hamilton in 2015 and 2016 — but this time without the diluted thrill of two teammates handling each other with care as they duke it out.

This sense of competition was perhaps most evident as Sebastian Vettel celebrated his victory at the last race, the British Grand Prix.

‘Here at their home, hahaha!’

TV crews around the world rushed to translate Sebastian Vettel’s message over team radio (delivered in Italian as usual) after he clinched the win at Silverstone.

After some cheering and the pro forma “grazie ragazzi,” Vettel went on to tell the Scuderia, “here at their home, hahaha! … We can take the English flag back to Maranello.”

That’s a reference to the Anglo-German Mercedes being based a stone’s throw from Silverstone in Brackley, and having won there five times in a row prior to 2018’s race. As with so many of the races this season, it wasn’t an unblemished victory. Vettel’s biggest assistance came from teammate Kimi Raikkonen, who collided with Hamilton on Lap 1, forcing the Brit to charge back through the field from dead last to rescue second place.

There’s no denying that Ferrari — and even the nimble Red Bulls, on the right kind of circuit — have been keeping Mercedes honest this season, after four championships with the Silver Arrows always seeming to hold the aces when it mattered most.

Quite who has “home advantage” at Hockenheim is a rather more open question. The supporters are likely to have a tendency towards local lad Vettel, but the German Grand Prix is one of the races Mercedes would like to claim as their own as well.

Nearing the half-way stage, here’s a look at how the heavy hitters are faring. There’s no better place to start than the race-winning drivers:

Verdict: Errors have cost Vettel valuable points since F1 started its summer in Europe. That might have been why he was so elated after Silverstone. He was his own worst enemy in the previous two rounds, picking up a costly grid penalty in Austria and colliding with Valtteri Bottas on Lap 1 in France. Nevertheless, Ferrari have made great strides this season, consistently matching Mercedes in terms of both race and qualifying pace. And even when misfortune strikes, for instance after Max Verstappen nerfed him in China in an overambitious move, Vettel has limited the damage well — scoring at least some points in every race this season. Nobody else in the field can claim that.

Verdict: With 11 races still to run, an 8-point deficit might as well be nothing at all. Hamilton could instantly recoup that with a win at Hockenheim. Hamilton, who’s just renewed for two more years at Mercedes, remains the same brilliant but temperamental racer as ever. Peerless on his day, he looked unstoppable at the front in Spain, while Silverstone was the kind of “recovery drive” — when you maximize your points haul despite an early setback — that can ultimately salvage a title for a driver. Hamilton and Vettel both sometimes reveal their insecurities via their radio chatter. But this season, it feels like “Bono” (Peter Bonnington) has had the tougher job, keeping Hamilton cool in the Mercedes cockpit. Then again, that might be connected with Mercedes bungling their pit stop strategies more than once this season. There’s no doubt Hamilton has more often had reason to radio in and ask his team what on earth went wrong.

Verdict: Monaco will have felt so sweet for Ricciardo, after a botched pit stop (no tires were ready when he came in, he had to sit and wait) cost him almost certain victory at the prestigious circuit in 2016. Red Bull’s impressive pace this year has added an extra dimension to the championship, but you get the impression Mercedes and Ferrari don’t consider them genuine title contenders. For Ricciardo, now 29 and with just seven career wins to his name, the temptation to seek a drive elsewhere next season must be great. For now, he says he’s in “no hurry” to sign anything. But his crash with teammate Max Verstappen in Baku could have soured the atmosphere too.

Verdict: Verstappen suffered severe growing pains at the start of the season, making a series of big blunders in the early rounds in collisions with Vettel, Ricciardo, Hamilton and others. At Monaco, he wrecked his own car right at the end of free practice, meaning he couldn’t take part in qualifying in the race in which grid position is most crucial. As Nico Rosberg put it earlier in the season, the 20-year-old “has to start learning” to grow into the world champion many expect him to later become. In the Dutch driver’s defense, there’s barely an F1 superstar out there who didn’t have a reputation as a bit of a hot head in his younger days: Michael Schumacher, Ayrton Senna, Hamilton and Vettel all leap to mind.

Haas: The American upstarts are fifth in the constructors’ title, resurrecting the career of former McLaren prospect Kevin Magnussen in the process. In terms of return on investment, cash-strapped Haas lead the field by some margin.

Honda: Struggling McLaren wanted another engine, any other engine, this season. So Toro Rosso drew the short straw, taking over the role as the lone Honda-powered team for 2018. It’s proved much less of a handicap than first feared. So much so that the Red Bull empire plans to run Honda engines for its senior Red Bull team in 2019.

Nico Hülkenberg: Seasons come, seasons go, and Nico Hülkenberg continues to overachieve and receive nowhere near enough credit for it. The only German on the grid besides Vettel continues to pound out the performances for Renault in the midfield. Whenever “the Hulk” has finished, it has been in the points, never lower than ninth. Some expected him to struggle paired with Carlos Sainz; they should have known better! The Spaniard said earlier this season that he was keenly learning “little tricks” from his more experienced teammate.

Williams: In a season and a half, Williams have slid from the front of the midfield to the very back of the pack. Former driver Jacques Villeneuve, never one to mince his words, recently said he thought the team was doomed. But we’ve heard that many times before about the plucky privateers. Don’t count them out just yet.

Sergei Sirotkin: It’s a bit cruel to have a Williams double-dip here, but Russian Sergei Sirotkin has struggled so much this season that he’s made his much-maligned Canadian teammate Lance Stroll look good by comparison. His “best” finish of the season was 13th place, in Austria, when only 14 cars went the distance.

Valtteri Bottas and Kimi Raikkonen: Perhaps they’ve not really been given a chance to show all they can do, but it’s time to accept that the Finns at Ferrari and Mercedes cannot challenge their team leaders Hamilton and Vettel. It’s just as well it’s a close race at the front between teams in 2018, because there’s little evidence of a serious in-house battle in red or silver.