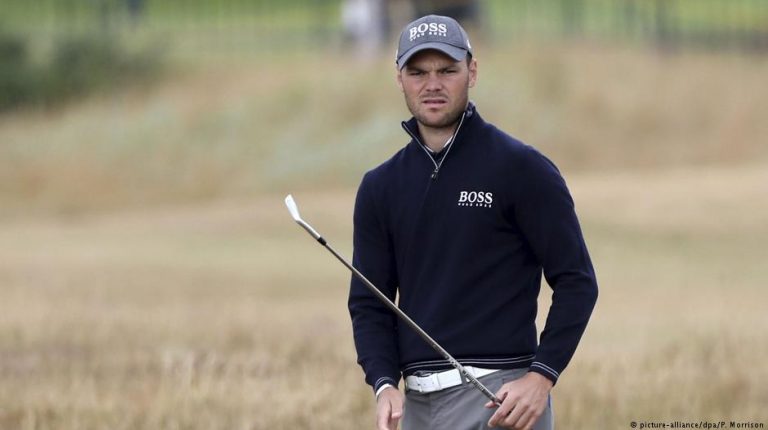 As another major golf championship reaches its peak, German participation is a concern. Martin Kaymer has shown himself to be a winner in the past, but what does it say to expect so much of one man?Despite being a two-time major winner, a former world number one and the man to sink the putt to retain a historic comeback in the 2012 Ryder Cup, Martin Kaymer has struggled to carry the flag for German golf in recent years.

After finishing the first round of the 147th Open Championship with the same even-par score (71) as Tiger Woods, Kaymer endured more than he enjoyed on day two. Teeing off at Carnoustie just as the rain and wind arrived, Kaymer delivered a solid front nine. As conditions improved though, Kaymer couldn’t. The Düsseldorf man traded pars with bogeys on his way back towards the clubhouse, before bogeying two of the last three holes, meaning he missed the cut and wouldn’t continue at the weekend. Kaymer finished +4, finding just 40 percent of the fairways.

While many struggle on the course nicknamed “The Beast,” Kaymer’s failure to make the cut leaves German golf once again noticeably short of representation at the climax of another major championship. The fact 60-year-old Bernhard Langer — now playing on the senior tour — was left to carry Germany’s hopes by the time Kaymer finished said it all.

Kaymer’s inconsistency is reflected in his ranking, 119 in the world. His struggle is exacerbated by looking at the European Tour, where there are 63 players with more tournament points than him. Further still, to focus on Kaymer is to somewhat hide Germany’s greater problem — a lack of talent.

Of the 18 German players listed in the world rankings, the nearest man after Kaymer at 119 is Alex Cejka at 240. After that, the rankings stretch across the 400s through the late 600s and even into the 800s. It doesn’t make for competitive reading. In contrast, France have virtually double the number of players as Germany in the European Tour, while England have 58 – including 19 ahead of Kaymer.

In fact, the brightest future of German golf is to be found in the women’s game. In the LGPA rankings, Germany have two players in the top 45 but on the European Tour, Germany have two top 10 players, including 23-year-old Karolin Lampert who is already ranked fourth.

In an interview with Golf.com back in 2011, Kaymer said that “Golf is just some sport in Germany.” His hope was that his surge to the top would see the sport’s profile increase, with Kaymer even quoted in the same interview as saying “people talk about me like I could be the next Boris Becker.”

Kaymer needs a few more major wins to equal Becker’s record, but his early success has automatically assigned him the same task as Becker. Kaymer is now the measure of all things golf for Germany, and so whenever the major championships do come around Germany looks to Kaymer. Germany’s top tennis player Angelique Kerbersuffers the same fate when Wimbledon or the US Open comes around on Eurosport. The expectation is great, the interest brief and the margins for success are small even for sport.

All in all it makes Kaymer a greater focus of interest, and that hasn’t served him well. In his nine PGA tournaments this year, his highest finish is 42nd at the Wells Fargo Championship. In European events, Kaymer did finish fourth at the BMW International Open in Germany, one shot off the eventual winner, but it was an anomaly.

Too much of Kaymer’s play of late has been that — an exception rather than the rule.

“I don’t have to convince anyone that I can win competitions,” Kaymer told Sport Bild ahead of the tournament. “The question is when the work of the last few years is going to pay off. That it will, sooner or later, I have no doubt.”

Given the last few years of Martin Kaymer’s career, even the 33-year-old has probably had some doubts of his own. But obsessing over whether Kaymer returns to form or not would be to miss the bigger picture. Kaymer has already contributed more to golf in his country than most, but it is Germany that must start doing more if it wants to stay competitive.