The FIFA referees committee announced a list of 36 referees and 63 assistant referees, representing 46 different countries, on 29 March to officiate the 2018 FIFA World Cup games in Russia.

The FIFA committee also selected 13 referees who will act solely as video assistant referees (VARs), during the tournament. The selection criteria for these VARs were primarily based on their experiences, as video match officials in their respective association and confederation competitions, in addition to their successful participation in several preparatory seminars and FIFA competitions, where they enhanced their VAR knowledge and skills by using the system.

One of FIFA’s selected referees to appear at the World Cup, Fahad Al-Mirdasi from Saudi Arabia, was dropped from the tournament after he was banned for life by the Saudi Arabian Football Federation for accepting bribe to help Al-Ittihad win the King’s Cup final with Al-Faisaly. As a result, the entire Saudi refereeing team has been removed from the tournament, including two assistants.

FIFA did not replace Al-Mirdasi with another one. Instead, the international governing body took two additional assistant referees from the United Arab Emirates and Japan. 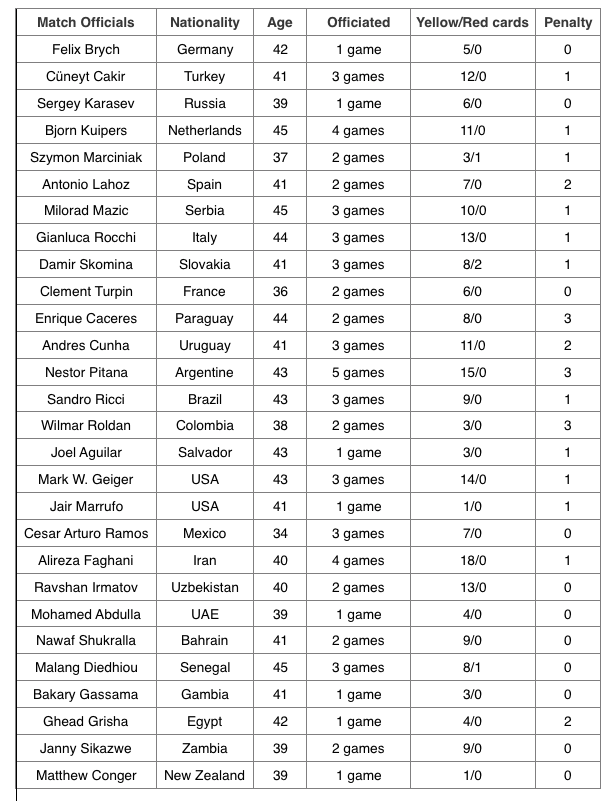