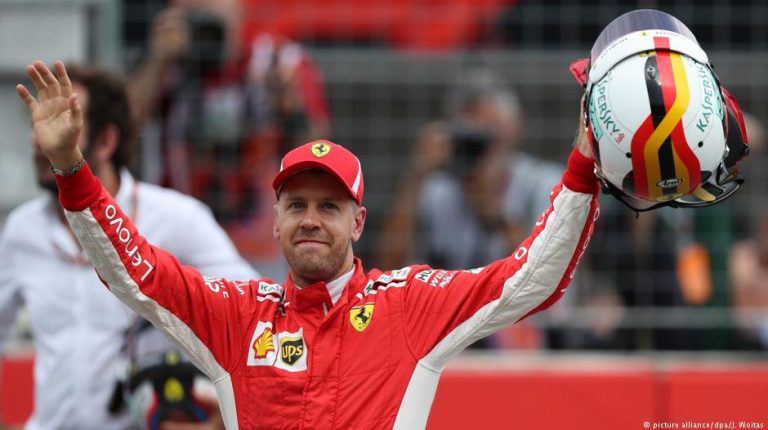 Sebastian Vettel put down a blistering lap at the last to claim his 55th career pole position for Sunday’s German Grand Prix. Rival Lewis Hamilton had to stop due to car trouble and will start the race in the midfield.Sebastian Vettel’s pole lap was more than three full seconds faster than the 2016 pole position lap time set by Nico Rosberg when F1 last raced at Hockenheim two years ago.

“First of all, many thanks to everyone who crossed their fingers for me,” Vettel said, in German, to the home crowd on the international TV feed right after exiting his car. Former driver David Coulthard then asked him to revert to English for the viewers at home, and probably for the Scot’s own sake as well.

Bottas, who will start second on Sunday, said afterwards that he didn’t think he could have matched Vettel’s time. He said he might have dropped “a few hundredths [of a second]” but not the “couple of tenths” that he would have needed.

Kimi Raikkonen qualified third in the other Ferrari, while Max Verstappen will start the race in fourth. The ever-impressive Ferrari-powered Haas cars shone again, locking out the third row with Kevin Magnussen fifth and Romain Grosjean sixth.

Renault’s Nico Hülkenberg, unusually off the pace of Haas at Hockenheim, laid claim to seventh ahead of his teammate Carlos Sainz.

Two exceedingly quick cars will be trying to charge through the field in Sunday’s race.

Lewis Hamilton’s car came to a halt in the latter stages of the first session of qualifying. In the searing sunshine, Hamilton tried to push the stricken Silver Arrow back to his pit box, but it was to no avail and Hamilton was left slumped in despair next to the car.

“This is something I’m a bit worried about,” Rosberg said on Sky. “I’ve never seen that body language from him before. We saw it for the first time at Silverstone, and now again for a very long time there — disbelief, or something.”

Hamilton ran wide twice and bounced across the rumble strips before his car failed, but later said that the car troubles had started developing prior to these incidents.

Daniel Ricciardo, meanwhile, elected not to run in the second session of qualifying, knowing that he would face a severe grid penalty no matter what owing to engine component changes Red Bull made before the session. He is likely to start at or near the very back of the grid, nominally qualifying 15th prior to his penalties.

Depending on what repairs Hamilton’s car requires — he may or may not receive grid penalties — the Briton looks unlikely to start higher than 14th.

Vettel already has a slim lead in the championship and will now be favorite to win the race at home from pole position. Hamilton will be hoping that his teammate Valtteri Bottas can beat Vettel into Turn 1 at the start and frustrate the Ferrari.