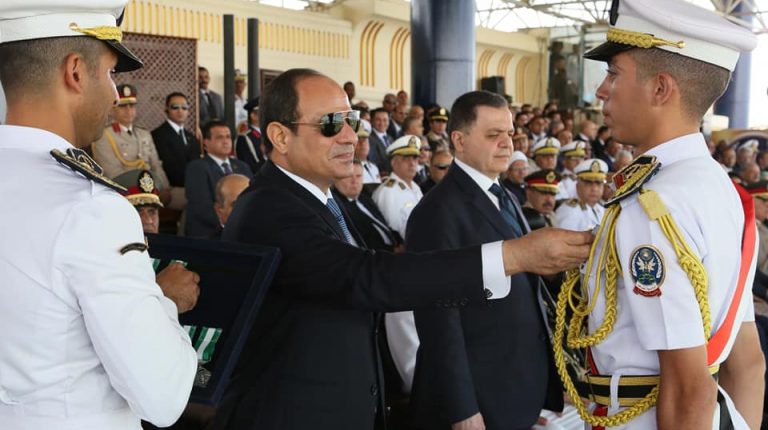 President Abdel Fattah Al-Sisi attended on Saturday the graduation of a new generation of students of Police Academy, which comes one day ahead of commemoration of the 23rd of July Revolution.
Minister of Interior Mahmoud Tawfik, Prime Minister Mostafa Madbouly, Parliament Speaker Ali Abdel Aal, Pope Tawadros II of Alexandria, Patriarch of St. Mark, and members of the Supreme Council of Police and leaders of the Police Academy, and a large number of ministers and senior state officials.
Tawfik is scheduled to give a speech during the ceremony, which through it he will pay tribute to the new graduates, call them to follow the approach of their colleagues who preceded them, and to work with every effort, sincerity and dedication in order to achieve the achieve the security and safety of the people of Egypt.
At the end of the ceremony, the President will honor the high honors of students of the academy, and the students of high-Graduate Studies Department which will be granted second class honors in recognition of their excellence and distinction during their studies at the College.
This came one day after El-Sisi returned to Cairo after concluding on Friday afternoon his two-day visit to Khartoum and meeting
Sudanese Sudanese President Omar El-Bashir.
Topics: graduates Police Academy President El-Sisi