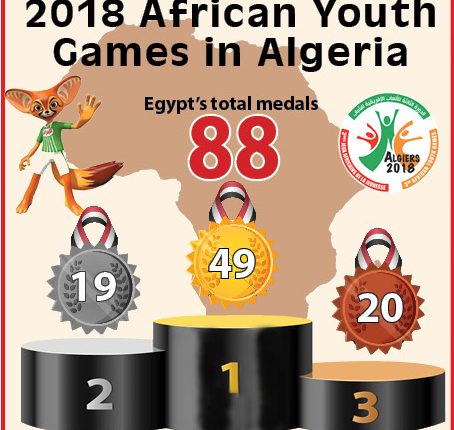 Minister of Sports and Youth Ashraf Sobhy welcomed a part of the Egyptian mission to the 2018 African Youth Games on Monday at the Cairo International Airport, stressing that the state will honour the whole mission following the tournament held in Algeria from 19 to 28 July. Egypt won a total record of 88 medals so far, with 49 gold, 19 silver, and 20 bronze winners.

Egypt’s mission includes 150 players competing in 30 events out of the third edition of the African Youth Games’ 35 sports. The medals put Egypt in first place in the medal table out of more than 50 participating nations.

Egypt surpassed its achievement in the previous African Youth Games held in Botswana, where they won 44 gold medals, seizing the first rank of gold medallists, followed by South Africa, Algeria, and Nigeria.

Egyptian athletes have been the centre of attention of local media after their last success in the 2018 Mediterranean Games, which prompted President Abdel Fattah Al-Sisi to honour the players who won different medals in the tournament and awarded them the Order of Sports Merit (class 1, 2, 3). In the Mediterranean Games, Egypt won a total of 45 medals, with 18 gold, 11 silver, and 16 bronze winners. The medals put Egypt in fifth place in the medal table out of the 25 participating nations.