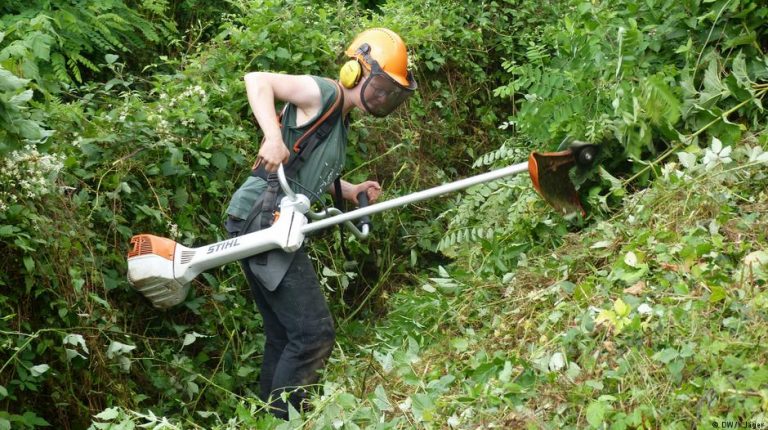 Youth in Germany have the opportunity to carry out a “voluntary ecological year” after finishing high school — and their experiences often last a lifetime. DW’s Karin Jäger joined them for a day.In Germany, students who have completed compulsory education and are under 27 have the opportunity to spend a year doing voluntary work in the social or environmental sector.

It’s an opportunity for them to consider careers — yet what they learn often has a lasting impact on their futures. Although it’s technically called a “volunteer” program, participants are actually paid for their work.

To find out more, I accompanied a group of young volunteers at the Biological Station Bonn in western Germany.

First, let’s be upfront: I am terrified of snakes. About 14 years ago, a snake-like creature slithered across the path in front of me at this very spot. It’s the first time I’ve been back since that fateful day.

While I work up the nerve to face my fears, Wiebke Börner stops the station’s transporter. Years ago, she also worked here as part of the program.

Now, she’s taking the young workers under her wing. She calmly asks them to mow a meadow in the Siebengebirge hill range, part of one of the oldest nature reserves in Germany.

As I keep an eye out for snakes, the young people prepare to head out, brushcutters in hand. Two of them, Tim and Jake, each grab helmets with ear and eye protection and proudly march through the tall, wild plants.

In the past, the excessive use of fertilizer for agriculture resulted in the loss of many plant species. Now, some of them have returned to this spot — but they require nutrient-poor soil to survive. Twice every summer, the volunteers remove plants that have absorbed the excess nutrients from the meadow.

They also stop invasive species like Robinia pseudoacacia, or black locust, which is native to the United States, from spreading further.

“They were planted here after the war, and they grow fast,” Börner says. “Their wood can be processed into furniture, but conservation-wise, this invasive species can be rather annoying.” Börner says.

For the protection of nesting birds, wood can only be cut here between October and the end of February.

The newly shorn grassland reveals an entirely different side to nature. Large grasshoppers — almost invisible thanks to their green camouflage — cling to stalks. Slugs and snails emerge from beneath houses and seek out a shady place in the greenery. White and brown butterflies flutter by in search of the nectar of colorful flowers.

“We have learned to identify endangered plants, as well as specific amphibians,” Jule, one of the volunteers, says with a smile. They use special traps to count the number of endangered crested newts: “More newts were then released for breeding at the ponds,” says Jule.

Despite the heat, everyone is wearing closed-toed shoes. “Could there be snakes here?” I ask Börner.

“Definitely — but they only come out from under the stones or boards when it’s sunny. When I see a snake I consider it a good luck sign,” she adds cheerfully. I grimace.

The volunteers have rearranged the partially rotten boards into a makeshift shelter for reptiles, Jule explains. She spots a small snail on her boot and places it on the grass. “It’s nice to be in nature,” she says. “It’s exhausting, but we do so many different jobs!”

Climbing trees during the apple harvest in the fall and pressing the fruits for juice are just some of the more memorable moments the students have had so far.

Jule is full of enthusiasm — despite getting a nasty cut from the thorns of the blackberry hedge. It seems like she’s found her passion. But, surprisingly, she no longer plans to study biology or landscape architecture. Instead, she now wants to study interior design.

“Landscape architecture is more theory than practice,” she says. “I’m more interested in art and design.”

Verena, on the other hand, had initially wanted to become an agricultural scientist, but after four semesters of study, she decided it wasn’t for her.

She regrets not having done a voluntary year like this one before starting down her study path. “I didn’t know about the program, otherwise I would have started directly with landscape ecology.”

Verena isn’t interested in industrial famring, rather she now wants to help protect nature. Despite the fact that she will only stay here for three months, she’s still happy that she has the chance to gain some practical experience.

Everyone here feels like they play important part, which motivates encourages them to do to best job they can, Verena adds.

Co-volunteer Tim agrees. “I’ve learned a lot about the sense of duty … which I never did during school,” says the 18-year-old. He says he feels like he has matured a lot since starting the program.

The benefits of working in nature

“Lunch!” somebody shouts through the thicket. Börner makes sure the volunteers get regular breaks, but she says it’s unusual for someone to skip a day of work.

It’s clear to see that these young people seem very well-balanced and relaxed. “At the beginning of the year, I was always quite tired at night, but now I’ve gotten used to the work, I have more energy now, and on the weekend I feel the urge to be active,” Jule says.

In a month, the year-long program will come to an end. With excitement and a bit of sadness, the volunteers will begin a new chapter in their lives.

“I’m happy, on the one hand, to start something new,” Jule says. “But I also have everyone here in my heart and I will be sad when I no longer see the others every day.”

After the break, everyone returns to their work without so much as a single complaint. “Drinking enough water and using suncreen is very important when working outdoors,” Jule says, reaching for the bottle as the sun breaks through the clouds.

If they’re lucky, the afternoon warmth may even lure some reptiles out of their hiding places. The volunteers would be delighted. But sadly, I have to head back to the office.