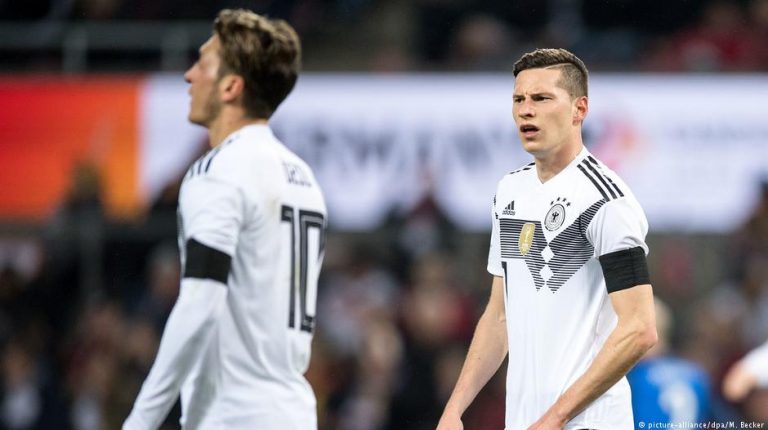 The nature of the playmaker’s resignation makes a comeback extremely unlikely. With no ready-made replacement in the squad, Germany and coach Joachim Löw have a big problem on their hands.Reducing a footballer’s career down to raw data rarely does a player justice. Numbers can’t describe, for instance, a jaw-dropping half-turn into a pocket of space that didn’t exist moments earlier. Nobody did that quite like Mesut Özil in a Germany shirt.

The playmaker’s numbers do bear a mention, however. In 92 appearances for the national side, Germany’s no.10 was directly involved in 63 goals – 23 strikes and 40 assists. He was crowned national team player of the year five times. To top it all, he played an integral role as Germany lifted the 2014 World Cup in Brazil.

The numbers don’t lie: Özil has been a phenomenal performer for Germany.

Despite leaving the door ever-so-slightly ajar, the nature of Özil’s resignation makes a comeback highly unlikely. Jogi Löw, still licking his wounds after Germany’s disastrous title defense, needs to come up with a solution to a tricky question: how do you replace a player like Mesut Özil?

The obvious candidate from the current squad is Julian Draxler. The Paris Saint Germain man has often been deployed as a no.10 for Germany in the past, though usually only as a short-term fix in Özil’s absence, rather than a genuine permanent contender for the role.

There will be concerns, however, with Draxler often preferred on the wing for club and country. Whether or not this has more to do with stellar competition for places in both squads is neither here nor there. By the same age, Özil was a regular for Germany and Real Madrid.

Furthermore, at 24-years old, Draxler has managed six goals and five assists for his country. Before his 25th birthday, Özil had 16 goals and 24 assists, with only three additional caps to his name. In terms of output, Özil was light-years ahead of his understudy at the same age.

Another candidate to replace Özil could be silently buoyed by claims made by Uli Hoeness this week. The loquacious Bayern Munich president said Özil had been “playing rubbish for years”, and hadn’t “won a tackle since the before the 2014 World Cup.”

It’s a common shot fired Özil’s way, and a largely unfounded one. For the record, Özil made 20 tackles in his last 30 caps. Hoeness’ claims also ignore the fact Özil made more chances per 90 minutes than any other player at the 2018 World Cup. He wasn’t at his best, but “rubbish” seems a little much.

While Özil’s languid style is often mis-interpreted, a player with a drastically different approach could prosper by contrast. Hoffenheim’s attacking midfielder Kerem Demirbay isn’t in the same league as Özil, technically-speaking, but his work rate and determination make him a favorite at club level. Germany fans fed-up with Özil’s mooching would surely enjoy seeing Demirbay’s dynamic presence injected into this bruised and battered post-World Cup squad.

One has to wonder, however, how Demirbay and other German-Turkish players are feeling in the wake of the Erdogan-saga.

The difficult truth is, however, that Germany don’t have a plethora of options beyond these two. Marco Reus is not a natural through the middle, for instance. Ditto Julian Brandt. Bayern’s Leon Goretzka prefers to play in a deeper role. Bayer Leverkusen’s gifted 18-year old Kai Havertz has been touted as one for the future, but that’s all he is right now.

For the time being, Germany need to live with the fact that, thanks to scapegoating efforts of the German FA’s leadership, they’ve lost a huge presence in their team. Love him or hate him, there’s no escaping it. The numbers don’t lie.