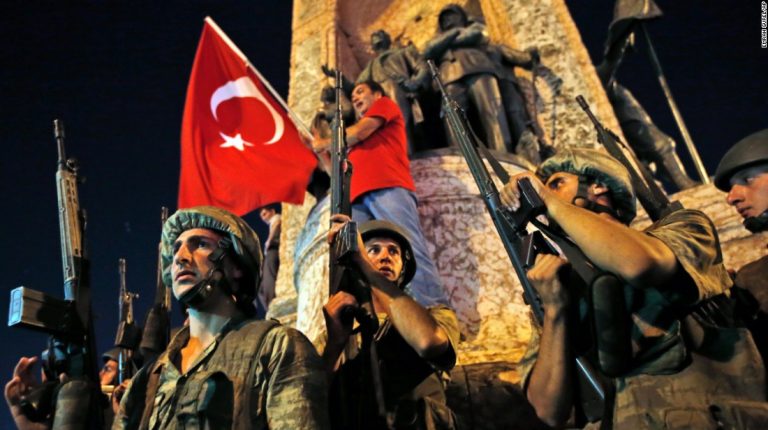 The Turkish government announced last week that the two-year state of emergency, which was declared after the failed coup to topple President Recep Tayyip Erdoğan, has ended. Nevertheless, human rights organisations still demand more repressive measures to be reversed.

When a failed coup attempt took place on 15 July 2016, the Turkish government claimed supporters within the military of exiled Muslim cleric Fetullah Gulen were behind it. President Erdogan labelled the Gulen movement a terrorist organisation and declared a three-month state of emergency, in order to actively prosecute its members. The state of emergency allowed the government to rule by decree. It, in turn, used the decrees as a means to establish new rules in all of the country’s state institutions. The resulting wave of firings and arrests prompted opposition members to deem the state of emergency a “civil coup and a witch hunt against critics,” calling for its immediate lifting, but to no avail.

The state of emergency was extended seven times in all. “However, if it is to be anything more than a cosmetic exercise, it needs to be accompanied by urgent measures. The state of emergency has been used to consolidate draconian governmental powers, silence critical voices, and strip away basic rights,” Amnesty International said.

In the last two years, evidence of the escalating human rights violations have been cited, ranging from arbitrary detentions to abusive prosecutions, from shutting down of media outlets to permanent closure of civil society organisations. Many of the measures issued under the state of emergency will remain in force even if the state of emergency was lifted.

Amnesty International said in a report that during the state of emergency, more than 130,000 workers from all areas of the public sector have been dismissed, 129,400 of them through lists announced with executive decrees, without individualised justifications or the possibility for them to mount an effective challenge to their dismissals. Only 3,799 of these dismissal decisions were revoked through subsequent executive decrees, the watchdog added.

“The powers to dismiss any judge, to ban any assembly by restricting peoples’ movement, and to arrest people over and over again for the same offense in this draft law are evidence that the state of emergency will continue in all but name,” Williamson said, adding, “the state of emergency may have ended, but so has the rule of law.”

Thirty-two decrees were issued during the state of emergency, and official statistics claim that some 160,000 people were arrested as a result. Of these, more than 70,000 people were jailed—among them journalists, human rights activists, and opposition politicians. Investigations were initiated against 155,000 people accused of being “members of a terrorist organisation.” The state of emergency also extended the length of time that a person could be detained to 30 days. That remained the case until the end of 2016. It was not until early last year, when the European Council warned Turkey of its concerns, that the length of detention was reduced to 14 days.

According to statistics made available by the Ministry of Interior and the Ministry of Justice, over 150,000 people are estimated to be taken into police custody during the state of emergency.

The maximum pre-charge detention period for certain crimes relating to, for example, “terrorism,” national and state security, and constitutional order was increased in July 2016 from four to 30 days, later reduced to 14 days in January 2017.

The watchdog also added that an ad hoc State of Emergency Appeals Commission was established by executive decree in January 2017 in response to domestic and international pressure over the lack of an appeals procedure to seek redress against dismissals. The commission began taking applications on 17 July 2017 and as of 22 June 2018 had received 108,905. These include applications from media and civil society organisations that had been closed down by decree. The commission had issued 19,500 decisions by June 2018 and accepted the appeals in only 1,300 of them, representing less than 7% of the decisions issued by that date.

In addition to this, a new law tabled at the parliament on 16 July 2018, if passed, would allow for the arbitrary dismissals to continue for three years from its adoption.

“The end of Turkey’s state of emergency should have been a good sign for human rights, but the draft law makes clear that the government’s plan is to end it in name only,” said Hugh Williamson, Europe, and Central Asia director at the Human Rights Watch, adding, “the government should scrap this law and fully restore human rights and the rule of law in Turkey.”

According to statistics provided by the Turkish government found in the latest European Union country report published in April 2018, over 78,000 people have been detained under anti-terrorism laws, more than 24,000 of whom remained in pre-trial detention in January 2018.