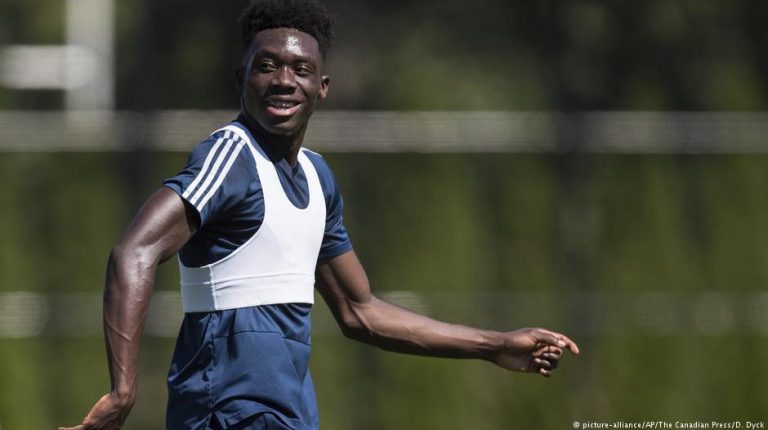 Nearly 20 years after Bayern Munich signed Owen Hargreaves, they have bought another player from Canada. In Alphonso Davies, Bayern have landed probably the most exciting player ever to come out of the Great White North.Alphonso Davies is a left-sided attacker blessed with plenty of pace and dribbling talent, which he’s shown off with Major League Soccer’s Vancouver Whitecaps since making his MLS debut in July 2016 at the age of 15 and eight months.

Davies, who joined Bayern on Wednesday, but will stay in Canada until the January transfer window, is what is known in the MLS as a “home-grown” player, as he left home in Edmonton, Alberta to join the Whitecaps Residency program at the age of 14.

Since then he has been the youngest in a series of categories: Youngest player to sign a contract with team in the second-tier United Soccer League (USL); youngest player in USL history to score a goal (15 years, six months): youngest player to play for Canada’s men’s national team (16), when he made his debut in a friendly against Curacao.

Who is RB Leipzig’s Jesse Marsch?

Davies then went on to play in the 2017 Gold Cup, where he scored twice in Canada’s 4-2 victory over French Guiana, making him (what else) the youngest goal scorer in the tournament’s history. His three goals in the Gold Cup made him the tournament’s top scorer, he was named as the Young Player of the Tournament and also made the Best XI.

Born in a refugee camp

However, Davies’ performances at the Gold Cup came just a couple of weeks after he had been granted Canadian citizenship. Until then he was a Liberian national, having been born in a refugee camp in the Gomoa East District of Ghana, to where his parents had fled during the Second Liberian Civil War. When he was five, Ottawa granted Davies’ family refugee status, and they moved to Canada, eventually settling in Edmonton.

So far this MLS season, Davies has three goals and eight assists in 20 matches. Last season, his rookie year, he made 26 appearances, starting nine of them.

His coach in Vancouver, former Welsh international Carl Robinson says he is sorry to see his most talented player go, but this is right timing for Davies.

A ‘sponge’ for information

“The football side of it, he’s ready. He’s ready to go and develop,” Robinson told a scrum of reporters at a Tuesday training session. “He’s at this age, I call him a sponge. He’s willing to take so much information on board… “He’ll go to a club where, tactically, technically, physically, mentally, they have the best people in the world… and they’re a club that will support him in every aspect of his life, and that’s what he needs as a young player.”

Bayern sporting director Hasan Salihamidzic certainly expects big things: “Alphonso Davies is a huge talent. At just 17, he has a bright future ahead of him,”he said at Davies’ unveiling on Wednesday. “Alphonso is very talented and it comes as no surprise that many other top clubs were after him.”

Teammates have also spoken of Davies as being mature beyond his years. And there’s no shortage of videos on the internet (see above) in which he shows off his pace and dribbling skills in MLS, where he will stay until the end of the season in December. The plan appears to be for Bayern to bring him over the Munich in January, but he won’t officially join the club until he turns 18 on November 2.

Everyone around the Whitecaps and MLS seem to think this young Canadian has everything it takes to make it in a top European league and the reported transfer fee of at least €10 million ($11.7 million) suggests that Bayern think the same thing. But one thing appears certain; if and when he does make his German debut, he’ll find that Bundesliga defenders won’t be nearly as easy to dance around as the ones he’s been used to facing in MLS.