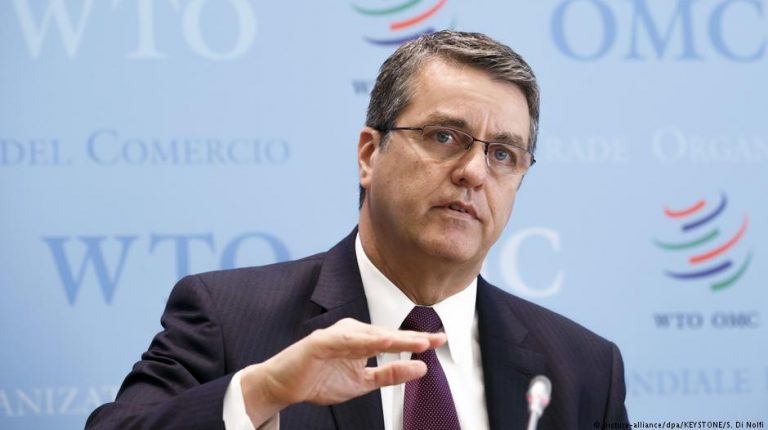 The WTO chief warned that the trade dispute with was risking loss of investment, jobs, and economic chaos in the US. “We are calling everyone who believes that trade is a force for good to speak up,” he said.World Trade Organization (WTO) Director General Roberto Azevdeo warned on Wednesday that the ongoing trade war between the US and China will wreak havoc on the global economy.

“On the trade war and how to stop it… it is not something a technical measure here or there is going to solve. This is a political situation,” he said at a press conference in Geneva.

Azevedo added that legal cases and “eye-for-eye” retaliation would only exacerbate the situation.

“A solution can only be found through high-level discussions and engagement.”

The WTO has been caught in the crossfire of the escalating trade dispute between Washington and Beijing that began with tariffs on Chinese goods, to which China responded in kind.

Read more: Who does Europe call if it wants to call America?

WTO: Millions of jobs will be lost

The latest development in the disagreement came on Wednesday, when US President Donald Trump accused China of a “vicious” attack on US farmers, using them as leverage a day after his administration announced an enormous aid package to farmers – Trump’s first round of tariffs having hit them the hardest.

Trump has blocked new appointments to the WTO’s highest court over fears they may side against the US in trade disputes. Azevedo warned the president that Washington would be left economically vulnerable if he continued to pursue his protectionist policies.

“We are calling everyone who believes that trade is a force for good to speak up,” he added.

European Commission President Jean-Claude Juncker was on his way to Washington on Wednesday hoping to stop further escalation of the conflict that has also unwillingly engulfed the EU.