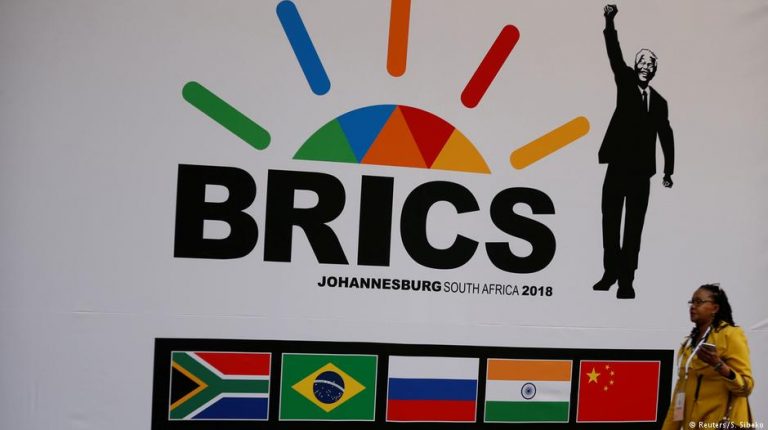 Diamonds and oranges: Five countries that jointly represent at least 40 per cent of the world’s people and GDP discussed details of economic collaboration at the 10th BRICS summit in South Africa.”The first decade saw BRICS cooperation getting off the ground and bearing rich fruit. The next decade will see faster changes in the international landscape and the international alignment of forces,” China’s President Xi Jinping said at the start of the BRICS summit in Johannesburg.

Ramaphosa highlighted the achievements of the group in fields such as finance, trade, agriculture, science, security and academic dialogue. He also noted its relevance for the development of Africa and the problems the continent still faces.

The establishment of its New Development Bank (NDB) and a business forum were two of the most important achievements for BRICS, he said.

The Shanghai-based NDB bank has already disbursed $5.1 billion (€4.3 billion) in loans since it was established some four years ago, with $1.7 billion approved this year alone, Ramaphosa told summit delegates.

“There is great potential for investment in Africa. In the past decade, Africa’s economy has grown two to three percent points faster than global GDP growth,” Ramaphosa said.

Massive infrastructure and skills development are needed to realize that potential, especially as Africa’s working age population is expected to double in the next 25 years.

The recently agreed African free trade deal would provide access to a market of more than 1 billion people and a combined GDP of $3 trillion, Ramaphosa noted. The African Continental Free Trade Area (AfCFTA), that will see an easier flow of commodities, goods, and services across the continent, has been signed by most of the 55 African Union members.

Russian President Vladimir Putin said more trade between BRICS countries was needed. “BRICS has a unique place in the global market. This is the largest market in the world and its joint GDP is 42 percent of the global economy,” Putin said.

The BRICS business forum has set up a business council and regularly brought together representatives of industry and small businesses across the continent, South Africa’s Trade and Industry Minister Rob Davies said. The forum has discussed how to support investment-led trade and trade in intermediate products within BRICS, he added.

Diamonds and citrus fruit sourced within BRICS were named as products to which value can be added before they are exported, Davies said.

The gems are a common thread for BRICS countries. Russia and South Africa are diamond mining giants, while India and China are centers in the diamond cutting industry.

South Africa is a leading exporter of oranges, lemons and grapefruit, but mostly trades through the African Growth and Opportunity Act (AGOA) of the United States.

The summit opened against the backdrop of a standoff over trade between the US and major economies, including China. US President Donald Trump has accused Beijing of using what he calls unfair trade practices.

As the BRICS leaders gathered, details of a “zero tariff” trade breakthrough deal between the US and the European Union began to emerge.

In Johannesburg, Xi decried what he said was an escalation of unilateralism and protectionism and urged global institutions to work against it and for global trade disputes to be settled though dialogue.

India’s Prime Minister Modi said BRICS countries had to share best practices and policies. Technology, he added, had to be employed to advance BRICS countries.

Brazil’s President Michel Temer also touched on the issue, saying “information, knowledge and the digital dimension of things have definitely become the core of economic activity.”

Xi and Modi both stopped in Rwanda en route to the summit. Xi also visited Senegal to and is expected in Mauritius after the summit, having already signed a string of bilateral deals along the way.

Modi opened India’s purse to Rwanda before travelling on to Uganda, where he announced that his government would set up 18 embassies in Africa.