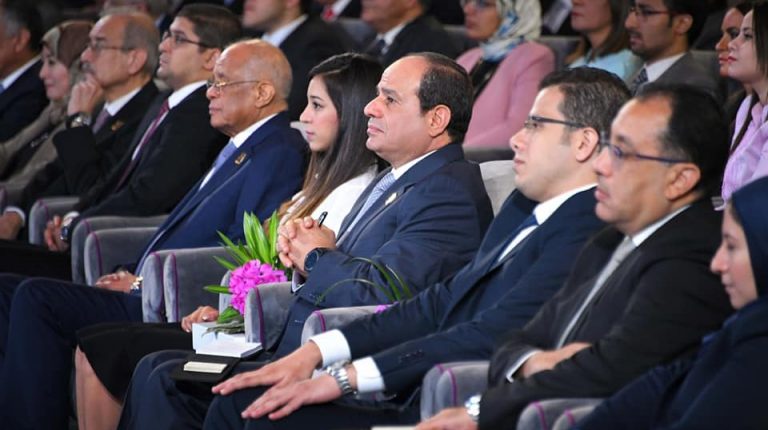 President Abdel Fattah Al-Sisi made remarks that covered political, economic and security controversial issues during the session of “Ask the President” initiative, during the sixth National Youth Conference on Sunday and highlighted Egypt’s stance towards various topics.

Beginning with the Suez Canal revenues, Al-Sisi said the rate of increase in the income of the new Suez Canal during the last three years, ranged from 2-3%, including approximately $600m, or EGP 14bn, adding that these revenues equalized amount spent on new Suez Canal project.

Al-Sisi said that the government is establishing additional social housing programme, as it is currently considering the problem of 200,000 families living in dangerous areas, which he believes that this situation is not appropriate for Egypt and its people. He also announced the opening of four tunnels to serve the movement within Sinai and vice versa in November.

Speaking about events of 3 July 2013, he first praised the support of brotherly countries especially in fuel supply, saying that, “if our brothers did not stand by us on 3 July, we would not have succeeded, as the supply of electricity power, gas, diesel, were stopped, but Arab countries transferred tankers via the sea to Egypt for free for 20 months, despite the fact that each month costs $800m.”

Moreover, in this regard, he also said that the army did not conspire against Muslim Brotherhood’s regime. “I want to ask you a question. Please let me ask. Can you remember who called the army before 30 June to intervene and save the state, you,” Al-Sisi addressed the Egyptian people.

Regarding economic remarks, the president blamed Egyptian people for calling for him to step down, reminding them about his role to save the country following 2013 events, calling upon Egyptians to continue with him his plans for the country’s development.

Commenting on complains of price hikes, Al-Sisi jokingly urged petroleum minister to raise gasoline prices since people ‘are doing the Kiki challenge’. In this regard, he criticized negatively judging the economic reform and his performance due to price hikes and responded to critics that a big amount of money has been wasted due to outdated systems. He also criticized the consumption habits of Egyptians during the month of Ramadan.

As for regional topics, he said Egypt supports the Libyan army and holding elections, as soon as possible and how Egypt is working on easing the suffering of the Palestinian people in Gaza.

Al-Sisi announced some upcoming plans that included that Egypt would soon have a railway with international standards, achieve natural gas self-sufficiency in 2020, to approve the local municipal law, during the upcoming month, to regulate the municipal elections. He also suggested to the Social Solidarity Ministry establishing centres to provide pre-marriage awareness for youth, in order to limit divorce rate.

“Obtaining Egyptian nationality for foreigners will have a mechanism and will be limited to a certain number,” Al-Sisi said.

The session came in a response to the youth inquires that were sent to Ask the President initiative, which was opened for a whole week before the kick of the conference.

Parliament speaker Ali Abdel Aal said that the Egyptian Parliament is the least paid from 187 countries worldwide, adding that MPs get only EGP 5000 a month without any additional compensations. He added that ministers’ wages will be reduced from 25% to 80%.

Many steps have been taken in the last 60 years, he said adding that this was an issue in several presidential reigns. He added that the state has not pursed any decisions that outlaws measures that lead to overpopulation. “We have not tried to put law that regulate birth control,” Al-Sisi said, suggesting that “two [children] are enough.” He compared between two families which one gave birth to two children and six, adding that it will not be fair to distribute food rations to both.

The second day of the conference focused on comprehensive new health insurance system, in which the officials highlighted its goals, which included eliminating waiting lists of critical surgeries, hepatitis virus C, providing sufficient quantities for vaccines, medicines, and baby formula, as well as reducing population growth.

A documentary showed have undergone operations as part of the plan to end the waiting lists were presented by the minister.

The president called on the society to work together with the state to promote the health and education system, stressing the need to bear the burden of economic reform to promote Egypt.

He added that the cost of implementing the full health insurance system will reach EGP 600bn and that if the state were not able to control debts burdens, it could reach EGP 650bn next year and will increase in the coming years, thus the state will not be able to spend cover the contributions of 30% of underprivileged citizens system within health comprehensive insurance system.

Egypt pays about EGP 542bn to serve the debt, otherwise it would have bad consequences on Egypt, Al-Sisi said, adding that with growing debt service, the government will be concerned with controlling the huge budget deficit.

He added that any system in the Egyptian state will succeed only through stability and security, and that the success of the developed countries was only due to its deep stability for decades.