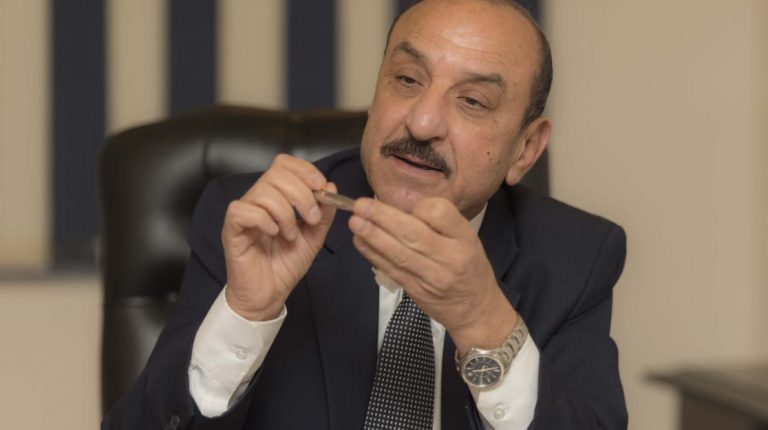 The board of directors of the Industrial Development Bank (IDB) adopted a strategy of five main focus points to unlock the bank’s potential, according to the chairperson and managing director, Maged Fahmy.

The first of these points is to overcome the problem of financial position and deferred losses by the end of 2018, then move to increase the bank’s capital.

The human resources (HR) restructuring project of the bank is also due to be completed within days in cooperation with PricewaterhouseCoopers.

IDB has made a remarkable start in all sectors and banking activities in recent years, especially in 2017, during which the bank was named the fastest growing bank among 27 other banks in Egypt, as per Business News’ 8th index.

Daily News Egypt sat down for an interview with Fahmy, whereby he pointed out that the new name of the bank is due to be launched soon after obtaining final approvals from the Central Bank of Egypt (CBE). In this interview, Fahmy reveals how the bank will achieve this level of performance and its work plan in the coming period. The transcript is below, lightly edited for clarity:

Initially, what are most important axes of strategy of action pursued by the bank’s management after you assumed responsibility?

In fact, I do not hide in secret that the bank was suffering from some of the challenges that prevented it from starting at the level of all banking activities. Hence, when I took over the bank’s chair in April 2016, I cooperated with management and department heads to put together a strategy that includes appropriate solutions to meet these challenges according to a specific time plan.

We have worked on five main points: overcoming the chronic problem of financial position and deferred losses by the end of 2018, then pursuing a capital increase, in addition to restructuring the employment in the bank in cooperation with a specialised international company, PricewaterhouseCoopers. This is due to be completed within days.

The strategic focus also includes enhancing the bank’s geographic reach and investing heavily in infrastructure and technology to stay close to developments in this field. Therefore, we thought about changing the name of the bank, and indeed we chose a new name, and it is expected to be launched within a few days after obtaining the final approvals from the CBE.

What are most important achievements and indicators of success achieved by IDB based on this ambitious strategy?

The bank has witnessed a major boom and achieved unprecedented growth since it was established in 1947. The figures reflect a major boom in asset size, net profits, net revenues, and increased market share.

As a result of these efforts, the bank was awarded the Fastest Growing Bank award from Business News among other banks obtaining it in Egypt, as well as being on top of the list of the cost-of-income index based on the financial results at the end of December 2017.

The bank has topped 27 other banks, thanks to rectifying its unbalanced financial position, where loans account for 144% of deposits. We increased deposits twofold, which fuelled a financial position growth by 133% and increased the market share from 0.22% to 0.44%.

The bank has also reached a significant achievement thanks to its transformation from chronic loss to profitability, achieving the highest growth rate in profits, reaching EGP 350m in 2017, up from EGP 190m in 2016. The bank also achieved the highest rate of growth in a net return of about 62%, scoring EGP 554.5m at the end of 2017, rising from EGP 342m in 2016. IDB was the second fastest growing net profit bank with a score of 52%.

You mentioned that, since 1947, IDB has pioneered in supporting development projects. What sectors is it most interested in?

The bank pays particular attention to development activities that are in line with the orientations of the state and serve the national economy.

As part of this strategy, the bank has adopted a new strategy in retail banking, under the new name of finance and retail for developmental purposes, to reach the largest number of low-income people, lift the burden on the state, and activate the bank’s historical role as one of the leading national banks in supporting development projects.

Within the framework of achieving this objective, which is unique to the bank, tripartite agreements have been concluded with a number of gas distribution companies in some governorates, in order to support the low-income citizens who cannot bear this cost alone.

The bank has gone a long way in this regard after the success during the recent period in the contract with NatGas and Fayoum Gas to finance the delivery of gas to 301,000 residential units in Alexandria, Beheira, and Fayoum. Some 92,000 units have gas now in the first phase. The total cost of the project is about EGP 500m.

In order to continue this success, the bank recently signed three new agreements with Cairo Gas, Sinai Gas, and PetroTrade to extend gas lines to houses in Cairo and Sharqiya governorates. The new deal aims to inject funding of EGP 125m to deliver gas to 47,500 units in 10th of Ramadan City by Sinai Gas, including 25,000 units in the first phase.

The agreement also includes a substantial amount of funding of EGP 50m to deliver gas to 25,000 units in Cairo and Sharqiya governorates by Cairo Gas, while PetroTrade is responsible for collecting bills.

This step comes in the belief of the bank that gas should be provided as the main source of energy at the lowest cost. The repayment period is the longest, thus reducing the burden on the low-income citizens in order to achieve the financial inclusion initiative sponsored by the CBE.

In numbers, how do you see the role of IDB in activating the CBE’s initiatives that aim primarily at supporting low-income citizens, such as mortgage finance initiatives and SMEs?

The Industrial Development Bank is one of the most active banks in the CBE’s initiatives. In real estate mortgage financing, the portfolio of the bank increased to reach EGP 529m to 5,220 clients, ranking fifth among all Egyptian banks.

There are  files under study for 1,000 other clients. We have decided to increase the mortgage funding allocations to EGP 1bn, after signing a new protocol with the Mortgage Finance Fund.

At the level of SMEs, the bank has become more active recently, with a portfolio of EGP 2.6bn, next to EGP 200m underway and EGP 400m being reviewed. The approved funding for small projects within the CBE’s SME initiative has reached EGP 1.1bn.

At the microfinance level, the bank has been able to finance 70,000 clients in Upper Egypt, Delta, and Alexandria with EGP 1bn in funding, whether through the bank directly or through organisations. The bank is in fifth place in financing SME projects and third in micro-funding across all banks working in Egypt.

Last week, the bank signed a cooperation protocol with the Micro, Small, and Medium Enterprises Development Authority (SMEDA) to provide a new financing package of EGP 100m for relending through associations and micro-funding organisations.

The protocol aims to access 100,000 new clients through Bashayer El-Kheir project, which aims to inject the funding through associations and microfinance NGOs.

The bank is keen to strengthen the cooperation with the SMEDA to provide financing for MSMEs, in order to achieve the development objectives of the country and the strategic objectives of the bank in achieving financial inclusion and reaching the neediest community groups.

The signing of this protocol comes as a culmination of 13 previous contracts signed with the SMEDA with funding reaching about EGP 427m, of which about EGP 385m were disbursed to 1,050 projects, aside from the new EGP 100m funding package.

I would also like to point out that the bank has increased the value of the lending portfolio available to finance the first commodity and fruit exchange in Egypt and the Middle East to reach EGP 380m, after consuming the first EGP 130m tranche. This is an increase of about EGP 250m.

The move comes after the bank has financed the commodity exchange on an area of 57 feddans in Badr, Beheira. The exchange includes 120 exhibitions, 680 shops, 130 refrigerators, and 50 export terminals.

The funds granted to investors under the CBE’s SME initiative are granted with soft terms of up to a five-year repayment period and funding valued at 70% of the cost. The bank announced its readiness for funding other commodity exchanges anywhere in Egypt.

To what extent is IDB interested in financing large companies?

The bank pays great attention to financing large enterprises and companies, especially those that contribute to the realisation of the state’s plan and strategy. The corporate loans portfolio has reached EGP 5.079bn at the end of 2017, including EGP 3.177bn of credit directed to government and public sector companies, including those working in the sectors of oil, gas, electricity, and contracting, as well as engineering, food, and medicine.

How much does IDB’s total loan and deposit portfolio currently reach?

What about the size of profits?

The bank has been able to achieve growth rates in performance and profits that are the highest throughout its history, where the profits in 2017 jumped to EGP 350m, up from EGP 190m in 2016.

What about the bank’s plan for geographical expansion?

Our network of branches is currently 18 branches. We plan to reach 50 branches within five years. I should point out that we are now working on restructuring many of the bank’s existing branches. We leased a new headquarters on 5,000 sqm in Cairo Centre to transfer the main management departments there soon. We also purchased a 5,500-sqm plot in the New Administrative Capital to establish a main headquarters in the Business District.