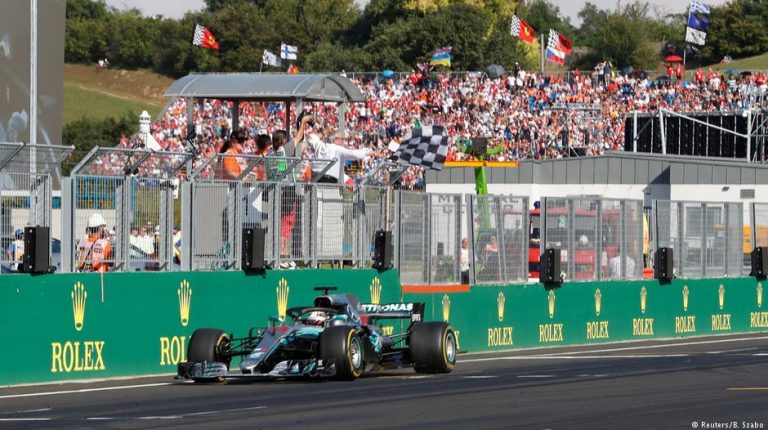 Lewis Hamiton has won the Hungarian Grand Prix to increase his lead in the drivers’ standings. His closest challenger, Sebastian Vettel, came in second ahead of his Ferrari teammate Kimi Raikkonen, who finished third.Lewis Hamilton, who started from pole position, cruised to victory at the Hungarian Grand Prix on Sunday to extend his lead at the top of the drivers’ standings to 24 points over Sebastian Vettel as Formula One goes into its four-week summer break. This was the Briton’s record sixth win at the Hungaroring as well as his fifth win this season and the 67th of the Mercedes driver’s career.

“We came here knowing that the Ferrari would be really quick this weekend,” Hamilton said shortly after getting out of his car. “But to come out with these points, we’ll definitely take that as a bonus. What a beautiful day and a great crowd – and a great job from the team.”

Second place ‘the maximium’ for Vettel

“We didn’t have the position that we needed given our speed,” Vettel said. There was a problem in the pit stop so we re-entered the track behind Valtteri. Second place is not what we wanted, but it is the maximum.”

Late in the race it looked like it could be a 1-2 for Mercedes, but Valtteri Bottas was overtaken by Vettel and Raikkonen with five laps to go. Bottas and Vettel touched cars in the first curve after the overtaking move, and the Mercedes suffered frontal damage.

“I got a hit from behind. I wasn’t sure what was going on,” Vettel said. “Luckily, the car wasn’t broken and we could carry on.”

As a result of that incident, Bottas was forced to make a second pit stop and, after he returned to the race, he bumped Daniel Ricciardo’s Red Bull off the track as he was about to be overtaken.

Team radio told Bottas to give the position back to Ricciardo, who did well to finish fourth after starting from 12th in the grid. However, Ricciardo’s Red Bull teammate, Max Verstappen, was not so fortunate, having to pull onto the grass and out of the race after experiencing a loss of power from his Renault engine on just the fifth lap.

This was the fourth time this season that Verstappen has failed to finish, and Red Bull team principal Christian Horner blamed the Renault engine as being substandard. Red Bull are to switch to a Honda engine next season.

The Formula One season resumes with the Belgian Grand Prix in Spa on August 26.

Relive the live action as it happened below:

Lap 65 – Vettel finally gets past Botta, but Botta runs into Vettel as they go into a curve! Raikkonen also passes the Mercedes. Bottas’s car is damaged and he has to come into the pits.

Lap 59 – Ferrari tell Vettel that Bottas is having trouble with his rear tires.

Lap 55 – With 15 laps to go it looks like only a serious mistake or a technical failure can stop Lewis Hamilton from winning the Hungarian Grand Prix and extending his lead at the top of the drivers’ standings.

Lap 51 – Vandoorne of McLaren is off the track, it looks like a technical problem. There’s a virtual safety car as a result. Vandoorne had been in ninth place. He reports that his “gearbox is gone.”

Lap 50 – With 20 laps to go its Hamilton, Bottas, Vettel, Raikkonen, and Ricciardo.

Lap 47 – Ferrari tell Vettel that his only chance to get past Bottas is to overtake him, as the Finn they don’t expect the Finn to make another pit stop.

Lap 45 – Ricciardo comes in for a pit stop and returns in fifth place.

Lap 44 – Vettel has Bottas in his sights, but so far, he just can’t catch him.

Lap 39 – Raikkonen maks his second pit stop and drops back to fifth. Teammate Sebastian Vettel comes into the pits as well. It takes over four seconds and Vettel drops back to third as he returns to the track. The two Mercedes, Hamilton and Bottas lead the way.

Lap 37 – Hamilton is starting to gain ground on Vettel, whos advantange is down to under 10 seconds.

Lap 27 – Now Ricciardo has Gasly in his sights. – and the Australian moves into fifth spot.

Lap 26 – Hamilton comes in for a pit stop, 2.7 seconds. Vettel takes the lead. Hamilton returns to the track in second place. They’re followed by Bottas and Raikkonen.

Lap 21 – Ricciardo (7) now has Magnussen (6) in his sights – and he’s done it, Ricciardo overtakes Magnussen to move into sixth place.

Lap 17 – The first five are: Hamilton, Vettel, Gasly, and Bottas and Raikkonen

Lap 16 – Bottas goes into the pits to swap from ultrasofts to softs and returns to the track in four place. Previously Raikkonen had pitted – and it took more than five seconds…

Lap 11 – Raikkonen has a problem in this heat! He complains that his drink supply isn’t working properly and his team confirm that he is right.

Lap 10 – Hamilton remains in the lead ahead of Mercedes teammate Bottas and the two Ferraris, Vettel and Raikkonen.

Lap 6 – Red Bull’s Max Verstappen is out as well! He had complained that he had lost power just seconds earlier. Verstappen is not a happy camper!

Lap 2 – On Lap 2 its Hamilton, Bottas, Vettel and Raikkonen up front. Leclerc of Sauber is already is out of the race, apparently due to a technical problem. Ricciardo told his team via the radio that he had “contact left front.”

Lap 1 – And they’re off! Vettel quickly gets past Raikkonen.

15:06 – We are just minutes away from the start of the Hungarian Grand Prix. It’s extremely hot outside of Budapest – the temperature on the track is reported to be 60 degrees Celcius!

14:11 – Lewis Hamilton showed again on Saturday that he’s untouchable in the rain, producing a brilliant last lap to take pole position for the Hungarian Grand Prix. His Mercedes teammate, Valtteri Bottas, starts from beside him, whiile the two Ferrari drivers, Kimi Raikkonen and Sebastian Vettel start from the second row.