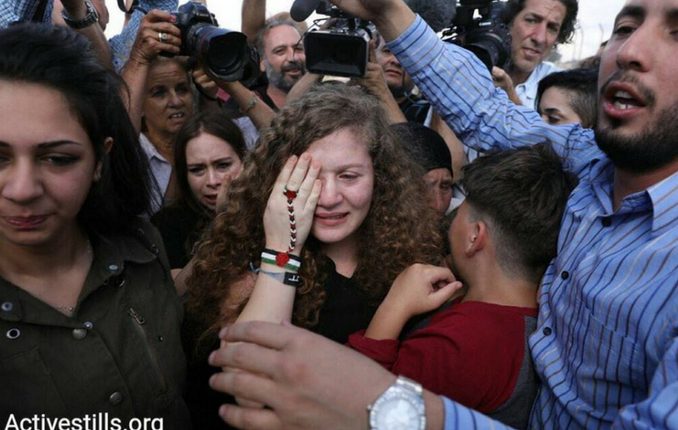 Ahed Tamimi on Sunday was freed from Israeli prison after serving almost eight months for assaulting Israeli soldiers. In the West Bank village of Nabi Saleh, she was met by supporters, as well as her family, who welcomed home the teen with banners and Palestinian flags.

She also met Palestinian President Mahmoud Abbas, who congratulated her on gaining her freedom.

Tamimi had been filmed assaulting Israeli soldiers in December 2017 and was arrested a few days afterwards. She accepted an eight-month prison sentence in May as part of a plea deal and was released early for administrative reasons at the discretion of Israel’s prison service. Her mother Nariman, who was also imprisoned over the incident, was released at the same time.

The teenager comes from a family with a long history of protests against Israeli occupation. She is well-known for her protests against the Israel Defence Forces and pictures of her confronting troops are widely published.

In 2015, a picture of the girl biting the hand of an Israeli soldier trying to arrest her brother became a symbolic photo shared widely around the world.