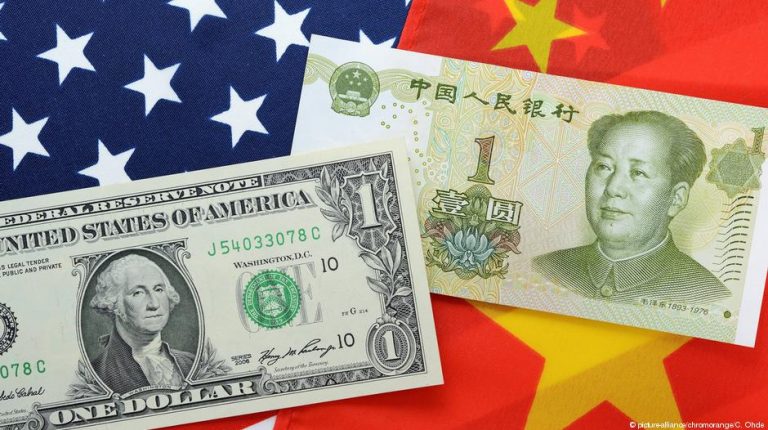 The Chinese yuan has been on a losing streak in recent days, drawing fresh ire from US President Trump who accuses Beijing of deliberately depreciating the yuan to boost its exports and undercut American competitiveness.The Chinese yuan has been under relentless downward pressure in recent months. The currency has been down by about 7 percent vis-a-vis the US dollar since April this year. In offshore markets on Monday, it fell to as low as 6.85 yuan per dollar, close to the one-year low it reached last week.

The drop in the yuan’s value has caught the attention of US President Donald Trump, who in the past has accused Beijing of manipulating its currency to gain an unfair advantage on the global markets.

Read more: Is China on course with ‘Made in China 2025’ amid trade row with US?

The US leader recently took to his favorite platform, Twitter, to once again criticize Chinese authorities, as well as the European Union, for “manipulating their currencies and interest rates lower” and “taking away our big competitive edge.”

US Treasury Secretary Steven Mnuchin has also stated that Washington will “very carefully review” the Chinese moves. “The weakening of the currency creates an unfair advantage for them,” he told Reuters.

Some observers suspect Beijing of deliberately pushing the value of its currency down in a bid to promote its exports and offset any economic costs incurred by Trump’s recent imposition of tariffs on Chinese goods.

“Devaluation is a mighty protectionist tool as it renders punitive tariffs virtually harmless. The yuan’s recent depreciation is nothing less than an import tariff of 7 percent across the board, not just a retaliatory tariff on selected US goods,” Thomas Straubhaar, a professor for international economics at the University of Hamburg, wrote in a recent guest contribution for DW.

“At the same time, this depreciation strongly supports Chinese exports to all of the world’s markets as Chinese products there are now 7 percent cheaper. Again, using depreciation means offsetting the impact of Trump’s punitive duties,” he said.

Critics point to the tightly controlled nature of the Chinese currency to support their claims. The yuan is not freely convertible and Beijing allows the currency to rise or fall just 2 percent on either side of the daily fix set by the central bank to prevent excess volatility.

Moreover, the Chinese central bank has a history of intervening in the foreign exchange markets to influence the value of its currency.

However, experts like the International Monetary Fund (IMF) argue that there’s little reason to believe that China is driving the drop in the value of the yuan this time around. The Chinese currency is still “fairly valued,” James Daniel, the IMF mission chief for China, recently told CNBC. “The moves haven’t been that big by the standards of other emerging markets. It only takes the currency back to where it was at the beginning of the year and on the average of last year,” Daniel said.

Some say it’s not in China’s interest now to depreciate its currency, as it would lead to increased capital outflows and erode the purchasing power of Chinese consumers. The reason for the weakening yuan, they point out, is the growing divergence in the economic and monetary outlook between China and the US. China’s economic growth has been losing steam over the past several months, with expansion slowing to 6.7 percent in the second quarter — still above the official 2018 growth target of around 6.5 percent.

While a slowing domestic property market and reduced outbound shipments have sharply increased the risks to China’s economic outlook, escalating disagreements between Washington and Beijing in recent months have cast a dark pall over the trade partnership between the world’s top two economies.

After Trump slapped tariffs on Chinese goods worth billions of dollars, China responded in kind, imposing retaliatory duties on American products. Trump has since threatened to expand the scope of US tariffs. The anti-trade moves and rhetoric have clouded the prospects for the world’s second-biggest economy. But mindful of inflaming debt risks, Chinese leaders have ruled out announcing fiscal stimulus measures to counter the slowdown.

Many Chinese state-owned firms and local governments already face massive debt burdens, a legacy of the previous round of massive stimulus — worth 4 trillion yuan ($590 billion) — the Chinese government came up with to shield the nation’s economy from the 2008-09 global financial crisis.

The US economy, on the other hand, appears to be strong, with figures released last week by the Department of Commerce showing the economy grew at its fastest pace since 2014 during the last quarter. American GDP expanded by 4.1 percent between April and June, making the United States the fastest growing of advanced countries, according to a government report.

With solid growth, rising inflation and a falling jobless rate, many expect the Federal Reserve, the US central bank, to stick to its current course on interest rates and hike them twice more this year. The rising rates could then prop up demand for the greenback and push the dollar up further.

Interest rates and bond purchases certainly affect the exchange rates, Joachim Fels, global economic adviser at the investment management company Pimco, told the Frankfurter Allgemeine Sonntagszeitung. “One can call it manipulation, but then any kind of monetary policy is manipulation of the exchange rates.”