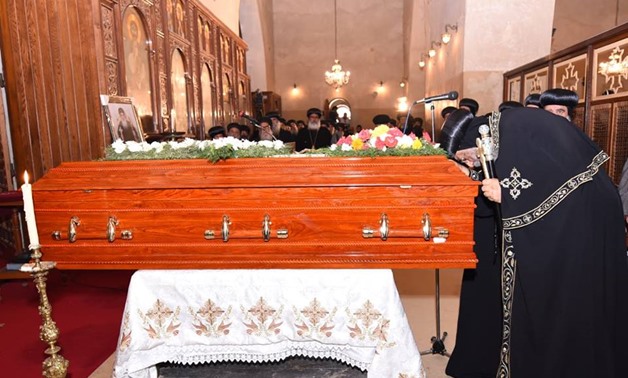 The Abu Makar Monastery in Wadi Al-Natroun is held on Tuesday a mass funeral commemorating Bishop Epiphanius, whose body was found on Sunday, in attendance of Coptic Orthodox Pope Tawadros II.

This came following the general prosecution’s order to perform an autopsy on his body, as part of the investigation of his death. The prosecution will also inspect the CCTV cameras inside the monastery.

Bishop Epiphaniusp, who was leading Abu Makar Monastery, was found dead on Sunday with signs of injuries to his head by an unknown assailant. The Coptic Orthodox Church described the incident as “strange circumstances.”

Initial investigations indicated that the perpetrator used a sharp element to hit the victim on his head as he was leaving his prayer and living vicinity inside the monastery.

During the funeral, Pope Tawadros II said, “We have lost an honourable face of the Coptic Orthodox Church.”

The late bishop is one of the most prominent contributors to the Arab Coptic heritage. He also participated in special conferences and researches on Coptic and church heritage. He was the supervisor of the manuscripts library at the monastery.