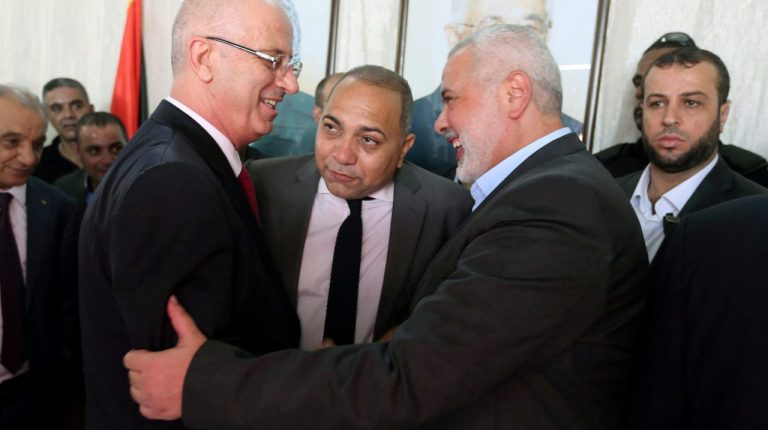 Both the Hamas and Fatah movements have announced on Monday that they held meetings with Egyptian officials to restore reconciliation talks.

The Hamas movement said that officials visited Cairo in order to resume talks on the Palestinian reconciliation, including members of the Hamas Political Bureau, Khalil Al-Hayya and Rawhi Mushtah. The Hamas delegation’s visit to Cairo coincides with the return of Egypt’s General Intelligence Service Chief Abbas Kamal from Washington and the arrival of the Fatah movement’s delegation to the Egyptian capital to convey the Palestinian Authority’s vision for Egypt’s proposal to end the internal Palestinian rift.

Last October, Hamas and Fatah signed an agreement at the Egyptian General Intelligence Directorate headquarters in Cairo and the two factions agreed to proceed with further meetings between them to plan for presidential and legislative elections.

However, the efforts of the reconciliation were stopped after the US declared it would establish its embassy in Israel in Jerusalem.

In the same context, the administration of the Rafah border crossing announced it will be open from next Friday to allow Palestinian pilgrims to pass through.

The administration of the Rafah border crossing has been transferred to the Palestinian National Authority since November 2017, according to an agreement between the authority and Hamas, which rules the Gaza Strip.

The Egyptian side had closed the Rafah border crossing due to security concerns in the Sinai Peninsula since July 2013, but has occasionally re-opened the crossing to allow Palestinians to travel to and from Gaza, especially for medical purposes. The Egyptian authorities had launched a campaign to destroy illegal underground tunnels, which have been vital in supplying Gaza residents with food, medicine, fuel, and building materials.

A state of emergency has been imposed in North Sinai, along with curfew hours in the cities of Rafah and Al-Arish, following an attack in 2014.