The Egyptian and Swiss sides have agreed to activate Swiss side contribution on promoting investment in the local market with the aim of increasing the flows of Swiss and European investments, through developing a plan with the Swiss Investment Fund for Emerging Markets (SIFEM) including businesspersons’ delegations exchange to help expand knowledge of investment in Egypt advantages, mentioned a ministerial document sent to Daily News Egypt upon request.

Economic, technical, and financial cooperation between Egypt and Switzerland dates back to 1978, as Switzerland provided Egypt with aids worth CHF 330m through four different financial agreements, mentioned the document.

The first funding was received in 1978 for CHF 60m, while the second funding was in 1984 was worth CHF 90m through a governmental loan without interest and a loan from Swiss banks with interest. 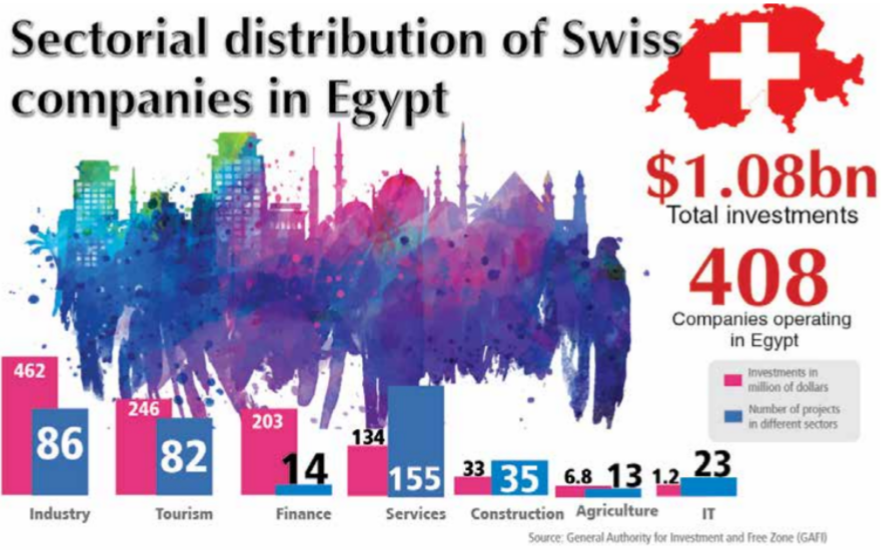 The document said that an agreement was signed in July 1991 to improve the terms of Swiss financing offered to Egypt, which reaffirm bilateral relations’ positive development, adding, “Swiss government decided to transfer its part in the first and second loans to a non-refundable grant. An agreement was signed with Swiss banks to full finance all the contracts value and since then this system has been followed in all Swiss financing agreements.”

The document clarified the main projects that were funded over the framework of the Swiss fourth funding and its complementary agreement, which were mainly focusing on health and irrigation sectors, noting that the first project was rehabilitation of blood banks over two phases worth CHF 25m.

Second main project that was funded through Swiss fourth funding and its complementary agreement was rehabilitation of scan centers aiming at equipping a large number of hospitals in the remote villages that are affiliated to Ministry of Health with basic scanning equipment to raise the level of medical and therapeutic services for the inhabitants of these villages. while the third project was replacing and renewing irrigation pumps in Kom Ombo area and rehabilitating 26 Edfou pump stations.

An agreement was signed to swap part of Egypt’s debts to Switzerland for CHF 150m, in order to reduce Egypt’s debt burden, as well as boost economic and social development mentioned the document, noting that the local equivalent of CHF 90m was allocated to the founding the Swiss Egyptian development fund.