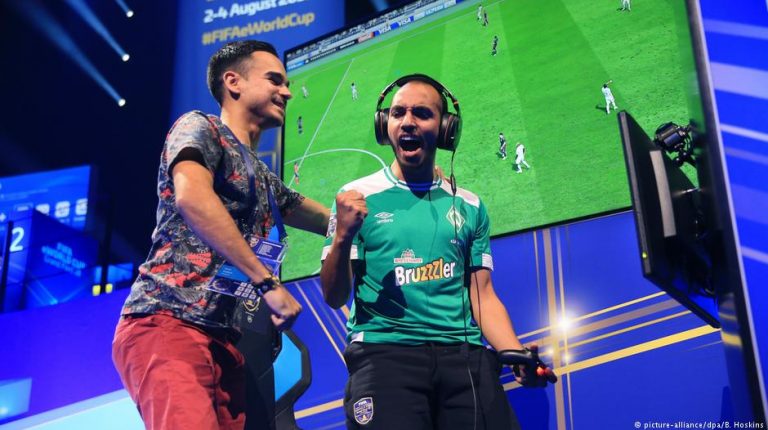 It has millions watching around the world and some of football’s biggest stars on show. But everything is a little different in the world of eSports. DW’s Matt Pearson went to watch the FIFA eWorld Cup to find out more.As midday approaches in the midst of a London heatwave, small clusters of people mill about outside the 02 arena, a cavernous 20,000-capacity venue plonked on the banks of the River Thames.

A significant number are wearing football shirts. Borussia Dortmund, Barcelona, Arsenal, Manchester United and even lower league German outfit Paderborn are represented. But the shirt seen in the greatest numbers doesn’t belong to any club or even country; it bears the badge of video game manufacturer EA Sports, makers of the immensely popular FIFA series.

“I love both football and FIFA,” says Craig Jones, who has made a four hour round trip to attend Saturday’s FIFA eWorld Cup grand final day. “I watch a lot of both things, online and sometimes live.”

While several of the big name FIFA players who made it to London represent ‘real world’ clubs such as Manchester City, Werder Bremen and PSV Eindhoven, the similarities to traditional football don’t run as deep as initial impressions might suggest.

As fans start to wander towards their seats inside a slightly more intimate area of the 02, the atmosphere is calm, quiet and almost entirely missing the tension usually palpable when attending ‘the real thing’. Forward lines featuring Cristiano Ronaldo, Ruud Gullit, Lionel Messi and Thierry Henry also offer a hint that we are operating in a different world.

“I think it’s like anything,” Craig, who like most fans is well under 30-years-old, continues. “If you like something then you want to see the people who are best at it doing their thing on the biggest scale. That’s what I’m expecting today.”

Saturday is the culmination of a process that started with 20 milion players dreaming of claiming the $250,000 (€215,000) first prize. Over the last three days, the 32 that made it through the vast field have been whittled down to the final four.

As Kurt Fenech (Kurt0411), of Malta, and Saudi Arabia’s Mosaad Aldossary (Msdossary) make their way to the stage for the first semifinal, the stands are much less than half full. But as the game progresses things warm up slightly. Each goal of Aldossary’s dominant 8-3 aggregate win brings loud cheers, particularly from a pocket of Saudi fans at the front, while Fenech struggles to control his frustration at exiting so close to the big money prize.

A pair of commentators analyze the action live as the two-legged games (one on Playstation, one on Xbox) are projected on to a big screen. As the day progresses, so the atmosphere begins to build and the seats start to fill as PSV’s Belgian player Stefano Pinna (StefanoPinna) beats Manchester City’s Marcus Jorgenson (Marcuzo) 4-3 after extra time to book his spot in the final after a tight contest.

Come the main event, the arena is packed, with about 3000 spectators looking on as some of the missing tension starts to creep in. But the noise only really hits a peak when Aldossary takes a deserved first half lead. The Saudi player never looked troubled as he cruised to a 4-0 aggregate victory to claim the cash and the newly-designed trophy, which, draped in his country’s flag he lifted aloft to the delight of several of his family members in the front rows.

As well as those in the arena, hundreds of thousands watched around the world through a wide variety of channels, while hundreds of millions watch FIFA players compete over the course of a year.

Despite the popularity of football and the backing of its government body, the FIFA eWorld Cup is a relative minnow in the eSports World. A combination of its perception as a ‘casual’ game, the fact that spending money on ‘packs’ gets you a better teams and the relative infancy of the competition format means it’s some way off the prestige, prize money and crowds of eSports behemoths like League of Legends or Counter Strike.

Read more: Is eSports about to be recognized as a sport in Germany?

Indeed, in a panel discussion before the semifinal, FIFA’s Head of Digital Marketing Christian Volk said he was pleased with the game’s growth in the eSports sector but admitted that “it’s too early to know if this can be a spectator sport.”

Though they currently remain in the minority, those who greeted Aldossary’s maiden victory with a roar may well disagree.