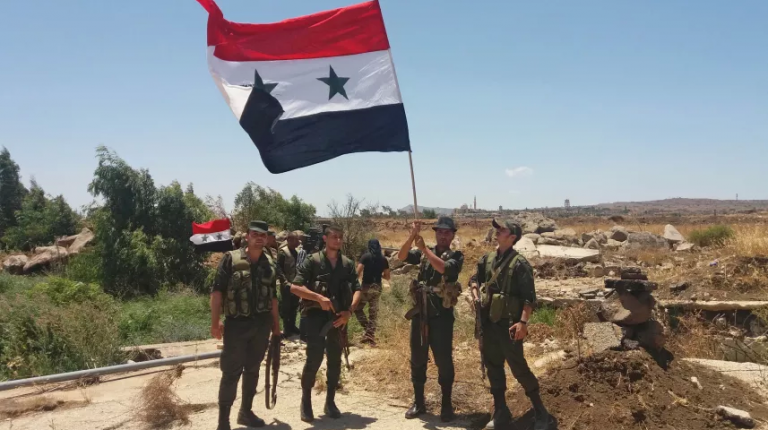 Armed conflicts and diplomatic crises engaging the world’s continents have witnessed varied developments in recent weeks. Between war-torn countries in the Middle East, diplomatic tensions in the west, and a number of unresolved issues with the east, the below is an overview of how major global events turned out in recent weeks.

UN peacekeepers returned Thursday to the frontier between Syria and Israel in the Golan Heights for the first time in four years.

The peacekeeping mission was halted in 2014 after at least 43 peacekeepers were abducted from there by Al-Qaeda affiliated militant groups including Jabhat Al-Nusra, and then released. At the time, those groups had claimed control over the border crossing between Syria and Israel.

This came as Israel launched an airstrike earlier this week, killing Islamic State (IS) militants who reportedly tried to cross inside its controlled part of the Golan Heights.

Mainly aiming at keeping Iranian backers off Golan and countering Iran’s influence from growing in Syria, Israel has been on high alert as Russian-assisted forces of Bashar Al-Assad advanced over IS and other militant groups in the south.

Officially taking a neutral position in the Syrian war, Israel still launched hundreds of airstrikes on the Syrian-held part of the Golan Heights and other parts in Syria targeting Iranian bases and Hezbollah.

The Syrian civil war has now extended beyond seven years. The Golan Heights, largely occupied by Israel since 1967, borders Syria, Lebanon, and Jordan. The Israeli annexation of Golan is not internationally recognised, but Israel is seeking US recognition of its sovereignty, also pushed for by some congressmen.

Russia sought US help in rebuilding Syria, suggesting a plan concerning government-held areas of the country, Reuters reported on Friday.

Despite different views on the situation in Syria, how final peace agreements should proceed, and the Iranian influence, Trump had previously expressed willingness to cooperate with Russia in solving the humanitarian crisis.

Tensions between the two countries are still boiling, mainly over Russian interference with the US presidential election and the ongoing investigation.

On 16 July, Donald Trump and Vladimir Putin held a rare summit in Helsinki, after which the US president came under heavy criticism for refusing to blame Russia for meddling with the election.

But the US intelligence maintained such accusations against Russia and the Kremlin, while US senators are pursuing a new legislation as a punitive measure, including restrictions on debt transactions, energy and oil projects, and Russian uranium imports.

Moreover, on Friday, the US Treasury sanctioned a Russian bank for financial transactions related to North Korea’s weapons programmes, The Financial Times reported.

In March, the US expelled over 60 Russian diplomats following a UK-led move across Europe over accusations against Russia of poisoning a former spy and his daughter using a nerve agent gas.

Although Trump hailed his meeting with Putin as “deeply productive” and said Putin was ready to help him face North Korea’s nuclear threat, CNN reported after the meeting that “the two leaders emerged from their meetings on Monday with little to show with regard to advancing solutions on major global issues.”

A second summit between the two presidents scheduled to take place in Washington this fall was postponed to 2019, as national security adviser John Bolton, in a statement, cited special counsel Robert Mueller’s investigation into Russian interference in the 2016 election as the reason for the delay.

Last week, the European Union (EU) rejected a deal proposed by UK Prime Minister Theresa May, known as the customs plan, under which the UK intends to collect EU tariffs on goods entering the country.

This comes amid negotiations between both sides supposed to reach an agreement plan by October of this year. The UK is due to leave the EU in March 2019.

Additionally, May is facing internal disputes over what the Brexit plan should look like and other demands to repeat the referendum. Earlier in July, foreign secretary Boris Johnson, a strong “Leave” advocate, quit and stated that the prime minister was leading the UK into a “semi-Brexit” with the “status of a colony.” David Davis, another British minister leading UK negotiations with the EU resigned citing similar reasons.

This week, May held informal talks with French President Emmanuel Macron over her plan. According to The Independent, May tried to earn the support of German and Dutch leaders as well, to face a united EU bloc led by Michel Barnier.

In July 2016, the UK held a public referendum on whether to remain in or leave the EU, which resulted in a majority vote in favour of the exit. Key things that have yet to be agreed are how the two sides will trade with each other in years to come—and how to avoid new border checks between Northern Ireland and the Republic, which is a member of the EU, according to the BBC.

The UK is also yet to negotiate how people’s movement will be organised, including mobility between the UK and the EU, British citizens living in EU countries, or vice-versa.

China announced on Friday that it would place tariffs on $60bn of American goods following threats by the Trump administration to double tariffs on Chinese imports earlier this week.

Meanwhile, a trade truce has been called for with Europe by Trump, seeking to negotiate tariff reductions with Europe, but cooperation against what he sees as unfair Chinese trade practises.

Since Trump enforced a new tariff policy at the beginning of this year on several countries like China, Canada, Mexico, and EU countries, including steel and aluminium imports, retaliatory tariffs imposed on the US have mounted this so-called trade war, especially with China.

Relations between China and the US have been tense over the Trump administration’s efforts to address a $376bn trade imbalance between the nations. President Trump has threatened to apply tariffs on all $505bn in Chinese goods entering the US if the two are unable to reach a settlement. Washington has already applied tariffs on $34bn worth of Chinese imports, with another set of duties on $16bn in goods scheduled in the days ahead, according to The Wall Street Journal.