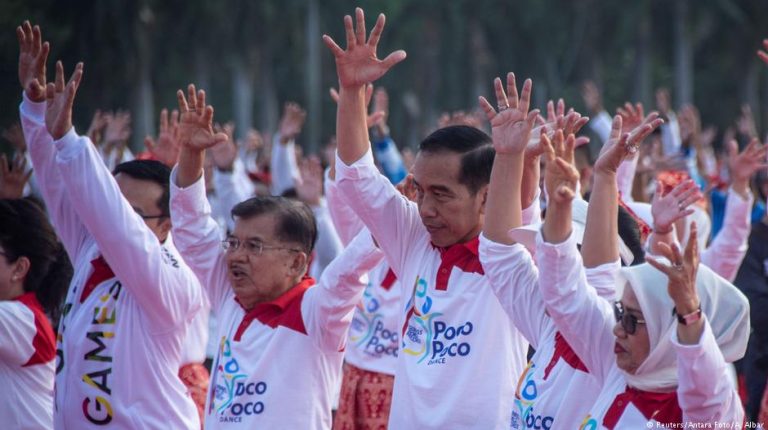 In an attempt to break a world record, tens of thousands have danced the poco-poco, including inmates in more than 500 prisons. Participants said the mass dance helps promote a tradition “that could have been forgotten.”Indonesian President Joko Widodo (seen above) on Sunday led tens of thousands of people in a mass traditional line dance known as poco-poco to highlight the Asian Games and attempt a world record along the way.

Some 65,000 people joined the dance in Jakarta, while an estimated 120,000 prisoners were expected to participate in more than 500 correctional facilities across the country.

“Indonesia will be recognized by the world with our poco-poco,” said volunteer participant Mila Hardjo. “This is the common goal of all Indonesians.”

High school student Raja Farid Akbar told the Agence France-Presse news agency that the mass dance showed the country was maintaining part of its traditions. “I am happy that I can help promote a tradition that could have been forgotten,” Akbar said.

President Widodo had previously complained that the Asian Games, considered the world’s biggest multi-sport event behind the Olympics, had received little promotion in the country and, as such, had not encouraged much enthusiasm in the country.

But the dance, organized by the Asian Games Organizing Committee, hoped to change that before the competition kicks off next week.

Read more: ‘Selfie monkey’ on the brink in Indonesia

“We, the younger generation of Indonesia, should strongly support and participate [in the games] because we may have to wait for a few years before Indonesia gets to host them again,” volunteer dancer Laras Handaningrum told the Reuters news agency.

More than 40 Asian countries are expected to join the Asian Games from August 18 to September 2, with some 11,000 athletes and 5,000 officials participating in the competition.