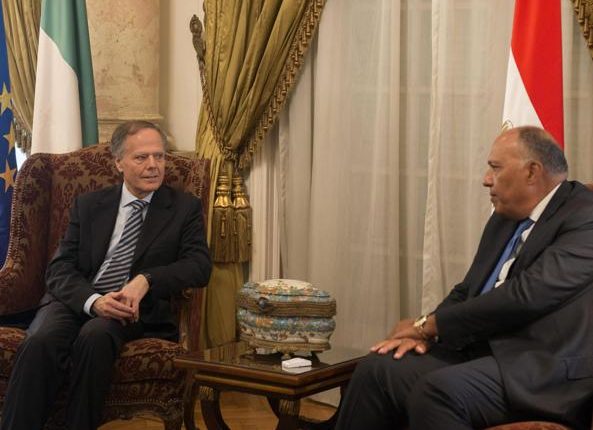 Italian Minister of Foreign Affairs Enzo Moavero Milanesi stressed that Italy and Egypt need to intensify their joint efforts to ensure ending the illegal migration crisis, calling for restoring stability in countries of conflicts, in a direct reference to Libya, as a solution to end the influx of migrants.

Milanesi said in a press conference in Cairo on Sunday that he and his Egyptian Foreign Affairs Minister Sameh Shoukry discussed “important topics”, including illegal immigration, Libya, and investigations into Cambridge student Giulio Regeni’s murder in 2016.

Milanesi praised Egypt’s efforts in confronting illegal immigration, describing them as “very good” steps that could help in ending the crisis.

Additionally, both ministers agreed to combat terrorism in the region. “We need to secure their people from such threats,” Milanesi said.

Moreover, Milanesi said that Italy and Egypt are sharing an “important political and geographic responsibility” toward Libya, adding that they have to ensure the restoration of security and stability through holding parliamentary and presidential elections to allow the Libyan people to decide their future and rule their country.

Regarding the Regeni investigations, Milanesi praised the joint judicial cooperation in investigating the murder, noting that he “is sure that, eventually, justice will take its course.”

During his address, Shoukry acknowledged that “relations between the two countries have witnessed challenges,” adding that they are doing their best to overcome them.

“Italy has booked a significant place in economic fields, as well as common challenges regarding terrorism, instability (in the region), and illegal immigration.”

Concerning the situation in Libya, Shoukry said that they agreed on reaching a solution aiming at restoring stability to the African nation, as well as letting the Libyan institutions hold their responsibility to ensure the end of terrorism and unify its territories.

Milanesi met with Egypt’s President Abdel Fattah Al-Sisi on Sunday during his three-day visit, and the first of Italy’s top diplomats to Cairo in years to do so.

Since Cambridge student Giulio Regeni’s death in 2016, the Italian-Egyptian relations have been clouded, particularly over the situation in Libya.

However, the diplomatic standoff came to a relative end when Italy announced the return of its ambassador, Giampaolo Cantini, to Egypt after recalling him last year amid frustration over “the lack of cooperation in its investigations in Regeni’s death.”

Tensions have extended to the situation in Libya, as Egypt is backing Libyan military commander Khalifa Haftar, while Italy supports the UN-backed Government of National Accord.

Italy seeks to tackle its long-time headache of migrants crossing the Mediterranean from Libya to southern Italy, who have been smuggled by Libyan gangs over the past few years.

A European proposal recently suggested establishing refugee centres in countries of the Middle East, which Egypt declined. Last June, Rome called for setting up migrant centres on the external borders of southern Libya during a meeting between Italy’s Interior Minister Matteo Salvini with Libyan leaders in Tripoli.