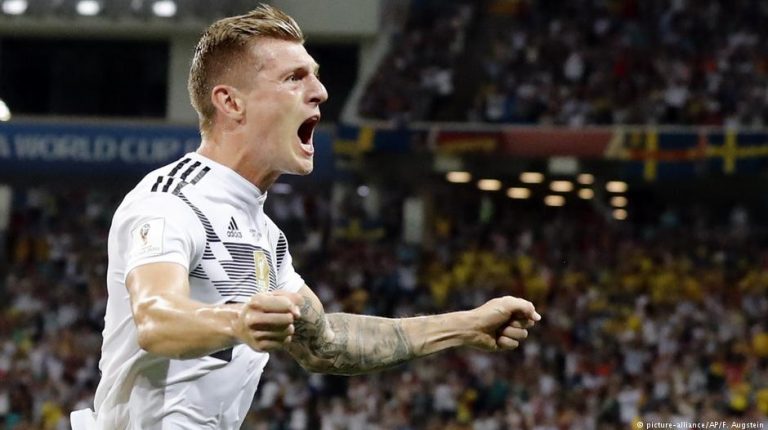 Another Champions League win at the end of another season of excellence has seen Toni Kroos named German player of 2017/18. Jupp Heynckes and Dzsenifer Marozsan were also recognised by the German football media.The Real Madrid midfielder was announced as the best German men’s player of last season by Kicker magazine on Sunday and succeeds Philipp Lahm, who won the 2017 award ahead of Kroos.

Votes from 475 members of Germany’s sports journalists’ union were counted and Kroos received almost five times as many as Freiburg’s Nils Petersen in second. Naldo was rewarded for a fine season with Schalke with third place.

“It is and remains a great honor to win Footballer of the Year,” says Kroos in quotes that will appear in Monday’s edition of the publication “This is a not a prize that is easy to win.”

It is the first time Kroos has won the award and he will add it to an already bulging trophy cabinet that includes four Bundesliga titles, a La Liga crown, three Champions Leagues, a World Cup and myriad individual honors.

Jupp Heynckes, who coached Kroos when the playmaker was at Bayern Munich, was named Coach of the Year after returning from retirement to steady the Bayern Munich ship and take them to a sixth straight Bundesliga crown. Despite that success, Bayern fell short in both the German Cup and the Champions League.

Unlike Kroos, Heynckes’ win was narrow, he edged out Schalke’s youung coach Domenico Tedesco by just two votes to claim the award for the second time – the first came in 2013, when he won the treble with Bayern.

“I’m very pleased to have been voted coach of the year,” said Heynckes. “But I also want to praise those who didn’t vote for me because there are many young coaches in the Bundesliga who deserve this honor as well – and of course Christian Streich at Freiburg.”

Dzsenifer Marozsan picked up the Women’s Player of the Year award for the second time running. The 26-year-old, won a domestic double and the Champions League with Lyon and finished comfortably ahead of Wolfsburg’s Pernille Harder.

The Germany captain is currently recuperating after sufferng a pulmonary embolism, which occurs when a blood vessel in the lungs is blocked, last month. The 26-year-old says that while the award is an “honor”, getting back playing is her priority.

“I am still receiving very good medical attention from the doctors at Lyon. Being completely healthy is now my biggest goal.”