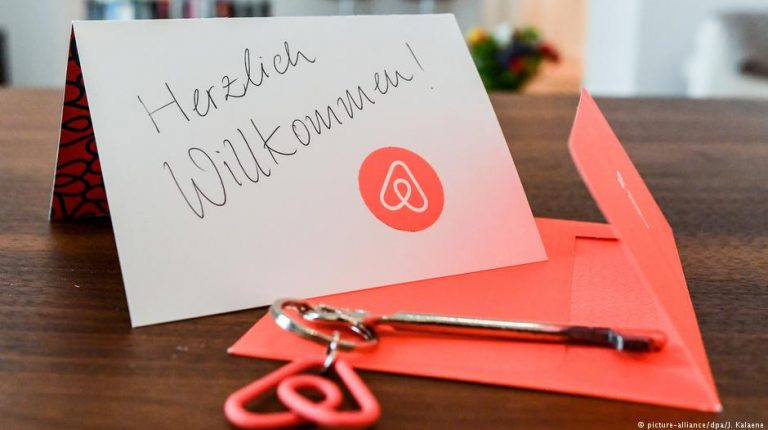 Holidaying with locals, cheaper and more personal than in a hotel: with that simple idea, the founders of Airbnb turned the travel industry upside down. We take stock.It started with an air mattress, and the fact that, in 2007, because of a conference in San Francisco, the hotels in the city were all fully booked. Three San Francisco students got the idea of offering places to sleep on an air mattress: “AirBed and Breakfast.”

Customers came and a business idea was born: why not rent a room or your whole apartment to people who needed somewhere to stay for a few days? All they had to do was to bring guests and hosts together. So the three students, Nathan Blecharzcyk, Brian Chesky and Joe Gebbia created a website and presented their idea to the world. That was on August 11, 2008. Sixteen places were on offer.

In 2009 the portal got the name known to every vacationer the world over: Airbnb. 300 million customers have booked overnight accommodation via the home sharing platform, which offers 5 million different places to stay in 200 countries. In 2017 Airbnb had a market value of 31 million US dollars.

The numbers speak for themselves: tourists love Airbnb. On the site, they find lodgings for every taste and budget, with that touch of individuality that hotels cannot offer. Airbnb now books more overnight stays worldwide than the five largest hotel chains. The hoteliers are angry. The home sharing platform deprives them of customers, makes sizable profits and circumvents tax requirements that apply to the hotel industry. But the real trouble for Airbnb comes from another source.

In cities in which Airbnb is particularly successful, the criticism is loudest: Paris, London, Palma de Mallorca, Barcelona, Berlin and Amsterdam. All these destinations have one thing in common: they are swamped by mass tourism. They are all in agreement that Airbnb is aggravating an already tense situation. Transforming living space into holiday lets is driving up rental rates. In Barcelona and Palma de Mallorca, local residents have already staged protests.

Landlords can earn more by renting apartments by the day to tourists than to local residents long-term. Locals can scarcely find affordable living space and are driven out of the cities. Critics say that, in this way, the portal is gradually destroying the distinctive charm of the neighborhoods it recommends. Airbnb itself sees things differently, as company co-founder Nathan Blecharczyk emphasized to the magazine “Stern” at the ITB travel trade show in Berlin. “75 percent of our accommodations are already outside the hotel districts. They’re spread out over the city, which benefits the local economy. Guests in them go to restaurants and cafes that are just around the corner and buy things in shops in the vicinity.”

Those positive effects exist, but they don’t improve the housing situation. Local communities are forced to take action.

Airbnb in a tight spot

Barcelona, as one of the most-visited cities in Europe, turned to drastic measures. In 2016 the municipal administration threatened to fine Airbnb 600,000 euros for allowing homeowners who had no proper license to advertise holiday apartments on its website. The legal battle lasted a year. In 2017 a compromise was reached. Airbnb got off lightly. The company ensured that it would remove all apartments without a license from its platform.

Like Barcelona, other cities are trying to keep Airbnb and other home sharing platforms from shaking up the price structure of their property markets. In Palma de Mallcorca short-term rentals of private homes have been banned in the entire municipal area since July 1. In the previous five years, rents had risen by fifty percent. Elsewhere individuals renting their homes via Airbnb have been saddled with restrictions. In Paris, for example, residents of central city districts can rent out their homes for only 120 nights a year. In Amsterdam a home can be rented to tourists only on 30 nights a year at most.

Since August 1, August 2018 Berlin has tightened the regulation of what is called misappropriation of residential premises. Short-term lets of entire apartments must be registered in advance with the city, and require a permit. Hosts then receive a registration number, which they have to cite in their advertisements, making it easier to check their validity. For travelers it also has an advantage: they can quickly determine whether the accommodation has been let legally or illegally.

The EU tightens the screws

Airbnb has also come to the notice of the EU. In July 2018, it urged the home sharing portal to make it clear whether a private or professional host was involved, because there are different consumer regulations for each of these categories. In addition, consumer authorities are demanding that Airbnb align its terms and conditions with EU regulations regarding the right to sue or claim damage compensation.

“Popularity cannot be an excuse for not complying with EU consumer rules. Consumers must easily understand what for and how much they are expected to pay for the services and have fair rules, for example, on cancellation of the accommodation by the owner. I expect Airbnb to follow up swiftly with the right solutions,” Vera Jourová, EU Commissioner for Justice, Consumers and Gender Equality, has emphasized. Airbnb now has until the end of August to present its proposals.

Airbnb has definitely shown itself to be cooperative. In such cities as San Francisco, Chicago, Philadelphia and Vancouver there are now appropriate interfaces with the municipal administration. Elsewhere the online marketplace is blocking unregistered hosts – as it has recently in Japan – or working together with local authorities and automatically charging a tourist tax, as it does in Vienna and Dortmund. Not all Airbnb hosts declare their rental earnings, and local authorities complain that this deprives them of tax revenues.

In the meantime, Airbnb remains unruffled and continues to extend its empire. Chris Lehane, Airbnb’s head of Global Policy and Public Affairs, told the Berlin daily Der Tagesspiegel that the company aims to be booking a billion trips annually by 2028. He said an all-purpose travel app was planned, which would leave no questions about destinations unanswered.

In 2017 Airbnb Experiences was launched. Anyone interested can book leisure activities at a destination, from street food tours to sailing trips, concerts or graffiti courses. With the data collected, the portal recommends new destinations tailored to users, and people around the world can apply to be hosts – for experiences.