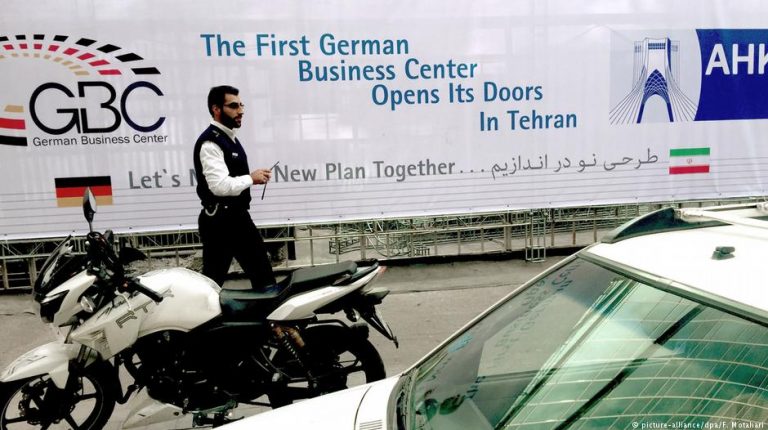 Trump’s decision to reimpose a range of economic sanctions on Tehran puts German and EU firms in a tough spot. It seems that their plans for doing business in Iran have to be shelved.The world heaved a sigh of relief in 2015, when, after months of excruciatingly difficult negotiations, Iran and six world powers reached an agreement to resolve the dispute surrounding the former’s troubling nuclear program.

In exchange for curbing its nuclear ambitions, Tehran was promised economic incentives, including the lifting of international sanctions previously put in place against Iran.

Read more: Could Iran really close the Strait of Hormuz?

The deal generated a sense of euphoria, particularly among European businesses that viewed Iran as an attractive market. Many firms began chalking up business and investment plans for the country. Little did they know that then-US President Barack Obama’s successor, Donald Trump, would withdraw Washington from the agreement and reinstate US sanctions.

After Trump’s decision in May to pull the US out of the historic deal, the Joint Comprehensive Plan of Action (JCPOA), the first round of US financial sanctions comes into force on Tuesday, August 7. And more punishing oil sanctions are set to be imposed in November.

These sanctions mark a significant turning point for companies looking to pursue business opportunities in the Middle Eastern nation. They affect not just American and Iranian businesses, but also firms and individuals based in other countries that have dealings with Iran.

Read more: US reimposes sanctions on Iran: What does that mean?

The situation has forced many European firms to begin winding up their operations in the country. French firms like the oil group Total and carmaker PSA have already indicated they are likely to pull out of Iran.

Trump’s hardline policy on Iran has perturbed many in Europe, particularly in Germany.

Around 120 German companies are currently running operations with their own staff in Iran and some 10,000 German businesses trade with the country. German exports to Iran were worth some €3 billion ($3.57 billion) last year.

But industry representatives fear German companies might have to leave Iran altogether unless they win a sanctions waiver from Washington, which seems an unlikely prospect under the current circumstances.

In the first five months of 2018, German exports to Iran already fell by 4 percent, and the trend is continuing, Volker Treier, a foreign trade expert at the German Chambers of Commerce and Industry (DIHK), told Germany’s Funke-Mediengruppe newspapers.

This is in sharp contrast to the situation last year, when exports rose by 16 percent, he said.

Read more: Germany to help its firms in Iran after US pullout from nuclear deal

To support business with Iran, some call on Berlin and Brussels to put in place measures to ensure effective financial channels with the country. “The biggest problem is finding a commercial bank that can process transactions related to Iran,” said Dagmar von Bohnstein, a representative of the German-Iranian Chamber of Commerce.

“As representatives of the German economy in Iran, we are urging the Economy Minister Peter Altmaier, the entire federal government and the European Commission to find ways to maintain effective financial channels with Iran,” she said, adding that Iran’s willingness to cooperate is also important to resolve this problem.

The German government said on Monday that it would continue to offer export and investment guarantees for companies doing business with Iran. Officials also noted that they were holding talks with their US counterparts on exemptions for German companies from Iran sanctions.

“German industry welcomes the clear willingness of the EU and the German government to oppose the extraterritorial nature of US sanctions,” Dieter Kempf, the president of the Federation of German Industries (BDI), was quoted by German media as saying on Sunday.

Kempf also noted that implementing the European Union’s “blocking statute” would send an important signal in this regard.

The statute forbids EU firms from complying with US sanctions, allowing them to recover damages from such penalties and nullifying any foreign court rulings against them. National governments could impose “effective, proportionate and dissuasive penalties” on any of their companies that cave in, the European Commission said on Monday, adding that the statute would take effect at midnight Washington time (0400 GMT Tuesday).

“The potential side effects have to be taken into consideration, however, so as not to harm European firms,” Kempf said.

Henning Riecke, an expert on US-EU relations at the German Council on Foreign Relations, said that the blocking statute is hard to implement. “Companies decide on their own on whether or not they want to do business in Iran and there is no legal way for European governments to force their companies to be active there,” he told DW.

“The American market is also much more important and attractive for Europeans than the Iranian market,” he added.

German Foreign Minister Heiko Maas also said in May that it would be difficult to protect German businesses that continue doing business in Iran after the reimposition of US sanctions. “I don’t see any simple solution to shield companies from all the risks of American sanctions,” Maas was quoted as saying.

It’s unclear how Tehran will react to any withdrawal of European economic engagement with Iran. Despite Trump’s sanctions endangering Iranian oil exports to the EU, they now account for only a quarter of Iranian oil, which mainly goes to places like China and India. Beijing and New Delhi, in contrast to the EU, are unlikely to easily give in to Trump’s demands with regard to reducing their imports of crude from Iran.