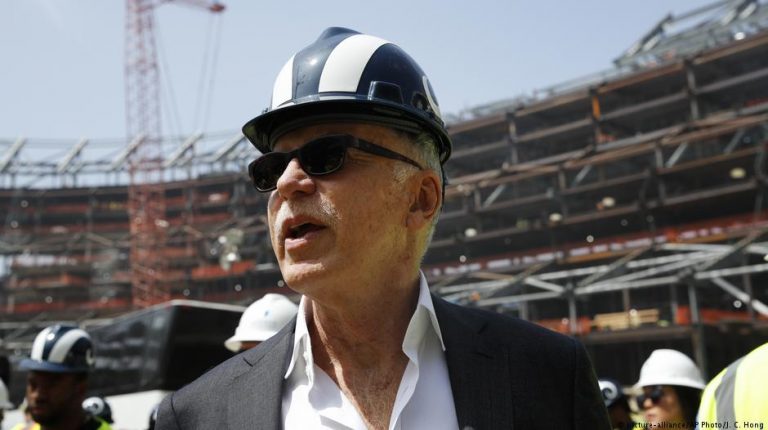 Stan Kroenke appears to have ended one of English sport’s longest ownership tussles and is set to take control of Arsenal. But the US sports mogul’s takeover has not gone down well with fans of the Premier League club.Three days before the start of a new Premier League season, a statement from Kroneke’s company KSE announced his intention to buy-out Russian metals magnate Alisher Usmanov’s 30 percent stake in the London club for €615 million ($713 million) in order to assume full control.

Usmanov is not on the board and does not have executive powers at Arsenal, but he tried to buy Kroenke’s shares last year for just over €1billion. But Usmanov has now accepted that Kroenke won’t sell to him, putting an end to a long battle for full control of the North London outfit.

Read more: Bayern CEO calls for 50+1 rule to be scrapped

“KSE’s ambitions for the club are to see it competing consistently to win the Premier League and the Champions League, as well as the major trophies in the women’s senior game and at youth level,” read a statement released to the London Stock Exchange on Tuesday.

The airing of those ambitions has largely been met with cynicism by Arsenal fans, who believe their club has stagnated in recent years after moving from Highbury, their home of nearly 100 years, to the Emirates Stadium in 2006. Since that move, Arsenal have failed to win the Premier League or reach the final of the Champions League and recently parted company with long-serving coach Arsene Wenger.

No more shares for supporters

“This news marks a dreadful day for Arsenal Football Club,” read a statement released by the Arsenal Supporters’ Trust (AST) on Tuesday. “Stan Kroenke taking the Club private will see the end of supporters owning shares in Arsenal and their role upholding custodianship values,” the AST statement continued, referring to the planned forced purchase of fans’ shares in the club.

Ian Wright, second on the list of Arsenal’s all time leading scorers, also lamented the loss of any fan ownership at the club on Twitter.

The deal will be financed by a €623 million loan from Deutsche Bank, with Kroenke reportedly contributing just over €50 million of his own money.

Despite assurances from Kroenke that none of the borrowing will be against the club, fans are concerned that this could leave them in a similar debt situation to rivals Manchester United, whose ownership by American family the Glazers has long been a source of discontent.

“It is in effect legalised theft to remove shareholder scrutiny on how Arsenal is managed… Arsenal remains too important to be owned by any one person,” the AST statement continued

Rob Wilson, a football finance expert from Sheffield Hallam University, told DW that the Arsenal deal is directly comparable to the Glazer takeover in 2005, when United were delisted from the stock exchange. He believes that although it “removes the level of transparency that fans have had” not much will change in regards to how Arsenal are run.

“The reality is that the majority shareholders that have been at Arsenal the last 10 years [Usmanov and Kroenke] have been the ones making the decisions. I think they listen to fans and what they want, but ultimately they have to determine the strategic direction of the club and that will influence transfer policy, wage policy and the objectives they set.”

Wilson’s research suggests Kroenke’s style of ownership, which he compared to an individual seeking to make profit from buying a house with a mortgage, can deliver success on the pitch and on the balance sheet.

Both individual ownership of clubs such as Chelsea, who are owned by Russian oligarch Roman Abramovich, and the “stock market style of ownership” that Wilson says Kroenke employs at Arsenal are not new concepts in the Premier League, which has taken a radically different path to the Bundesliga.

Germany’s top flight uses the 50+1 rule, which enshrines the right of fans to have a say in their club’s decisions. Wilson says some English fans sense they are losing their grip on their clubs.

“Most fans, irrespective of the club, feel it belongs to them because they’re the lifeblood of where it’s come from. Owners come and go and they’re the ones that stay behind,” Wilson said.

“But we’ve seen this big move over the last 25 years that the revenues from TV companies are very significant and matchday spending is so marginal in terms of revenue generation that clubs are driven now as bonafide businesses. And that doesn’t sit as easily with passionate football fans,” he added.

From the early reaction to the bid, that seems to ring true. Some will feel the takeover has cast a shadow over Arsenal’s new era, which begins against Manchester City at The Emirates on Sunday when Unai Emery will take charge of his first match.