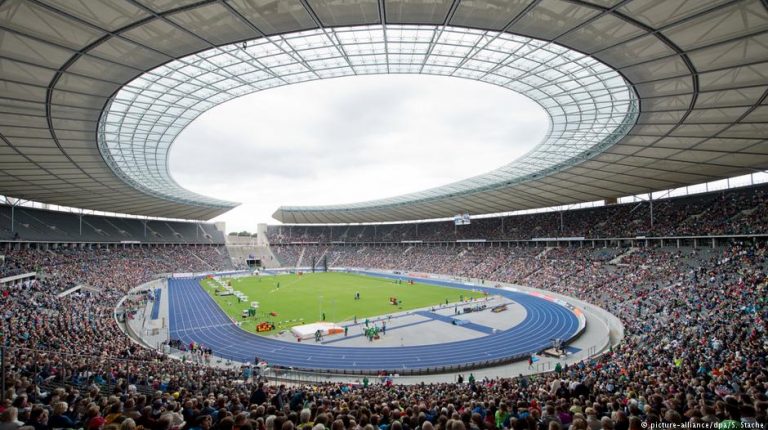 Team Germany hopes to win big in shot put and javelin for the home crowd in Berlin’s Olympiastadion. Russia’s federation is still barred from international competition, but 29 of its athletes were cleared to participate.The European Athletics Championship began in Berlin on Monday, with 1600 athletes from 51 European countries participating. Seven reigning Olympic champions, 15 world champions and 34 European champions from Amsterdam 2016 will go head to head in the 24th edition of the 84-year-old event.

It will be the second part of this year’s new multi-sport European Championships, co-hosted by Glasgow and Berlin.

Athletes will compete at Berlin’s historic Olympic Stadium, the setting of the Athletics World Championships in 2009, where Jamaica’s Usain Bolt set the current 9:58 seconds world record in the 100 meters.

The prestigious 100 meter titles will be settled early in the event, on Tuesday night. Team Netherlands will be defending their titles in both the male and female events, with Churandy Martina and Dafne Schippers having won gold medals respectively, at home in Amsterdam 2016.

Martina is likely to face a strong challenge from Jimmy Vicaut of France, who is seeking his first gold, after a silver in 2012 and bronze in 2016. Britain’s up-and-coming Zharnel Hughes will also be a contender, counting on the help of Bolt’s former mentor, Glen Mills.

Schippers will once again be the female sprinter to beat. The heavy favorite is seeking her third consecutive European gold medal in the 100 meter dash. She won silver in the Rio de Janeiro Olympics of 2016 and was the only European in the 100 meter final. Hot on her heels will be up-and-coming athlete Dina Asher-Smith, of Team Great Britain, who won gold in the 200 meters in Amsterdam.

A showdown between Schippers and Asher-Smith is expected, but Gina Lückenkemper, Germany’s strongest sprinter and bronze winner in the 200 meters in Amsterdam, will hope to catch them.

“I want two medals but I know it won’t be easy,” Lückenkemper said. “It is special to run at the European Championships in my home stadium,” she added.

Team Germany has its hopes pinned on what could be a historic medal sweep in the men’s javelin, with Olympic champion Thomas Roehler, world champion Johannes Vetter and national champion Andreas Hoffmann all competing for the home crowd.

Discus thrower Robert Harting will hope to mark his retirement with a spot on the podium. He won gold medals in the 2012 and 2014 European games.

His brother Christoph Harting was the darling of the German team when he won gold in Rio, but going wide on his three qualifying shots, he had a premature exit from Berlin’s championship.

“I was in top shape, the qualifying was to serve as practice for tomorrow. I am very disappointed emotionally,” Harting said.

The young German discus thrower was not the only surprise exit. France’s Kevin Mayer, decathlon world champion and top favorite in the event, overstepped all three of his long jump attempts and ruled himself out of the medal contest.

“This is a black day for me. I do not have an excuse,” a disappointed Mayer said of his early tournament exit.

Doping hangs over the sport

This year’s European Championships come at a difficult time in the world of Athletics, as it recovers from the stigma of past doping scandals. The Russian national federation is still suspended from international competition due to state-sponsored doping.

Some 29 Russians, who met the requirements of the International Association of Athletics Federation (IAAF), will compete as ‘Authorized Neutral Athletes’ in Berlin.

European Athletics president Svein-Arne Hansen is confident that the Russian athletes in Berlin are clean and said he hoped the Championships could help restore the sport’s credibility.

“I think it’s the strongest championships we have ever seen,” Hansen said.

The European Championships in Berlin will feature a combination of field and track events daily, with qualifiers in the morning and finals in the evenings, and will conclude this coming Sunday, August 12.