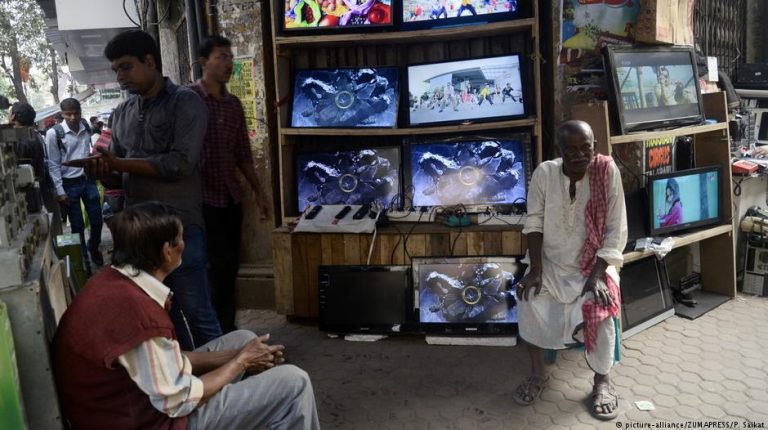 In the past few years, the media industry in India has expanded tremendously. But at the same time, corporate and political influences on journalists have also increased. Murali Krishnan reports from New Delhi.The recent resignations of two prominent journalists from ABP news channel have once again sparked a debate on media censorship in India. Those who left the channel included the former editor-in-chief, Milind Khandekar, and Punya Prasoon Bajpai, who hosted the popular show “Master Stroke.”

Last month, the channel irked India’s ruling Bharatiya Janata Party (BJP) by running a story about a villager in the central state of Chhattisgarh who claimed that she was told by a government official to lie to media that she had benefitted from Prime Minister Narendra Modi’s rural schemes.

In another incident, ABP’s news anchor Abhisar Sharma was taken off air for over a fortnight after he reportedly defied instructions from the management that he must not criticize PM Modi’s policies.

Indian journalists say media outlets have never been under more pressure than today.

Read more: Indian journalists work in an ‘atmosphere of intimidation’

“The government does not directly exert pressure on journalists; it puts pressure on media owners who usually concede. Self-censorship has gone up tremendously since the BJP government came to power (in 2014). What happened at ABP News is just one example of this censorship,” Sevanti Ninan, a New Delhi-based journalist, told DW.

“Large media organizations are being owned and controlled by political and business conglomerates that are using channels and newspapers to undermine their opponents,” Srivastava told DW.

Independent Indian journalists find it increasingly difficult to report freely in the current political environment where “ultra-nationalism” has dominated the media landscape.

Apart from incidents where the pressure on journalists is implicit, there are also cases in which reporters are systematically harassed by political workers and social media trolls.

“Corporate and political influences have overwhelmed media organizations. Only a few journalists tend to take an independent line,” Abhishek Singhvi, a spokesperson for the opposition Congress party, wrote in a recent column.

Bigger but not better

India once prided itself on a vibrant and diverse press, but analysts say it has taken a completely opposite direction in the past few years.

The Indian media industry has massively expanded since the 1990s. There are now more than 100,000 registered newspapers and magazines as well as over 400 news channels in various languages. Some 150 news channels are awaiting clearance from the government.

But these large numbers of media outlets have not guaranteed more freedom of press in the country.

“The corporate sector relies on government funding. Its nexus with political parties and government officials have thus increased manifold. But in the process, the newsrooms have lost their credibility and independence,” Gurpreet Singh, a columnist, told DW.

Analysts say the situation is likely to get worse because the BJP government needs “favorable media coverage” ahead of next year’s general elections. At the same time, the opposition too wants to use the media to its advantage.

Read more: Is India an unsafe place for journalists?