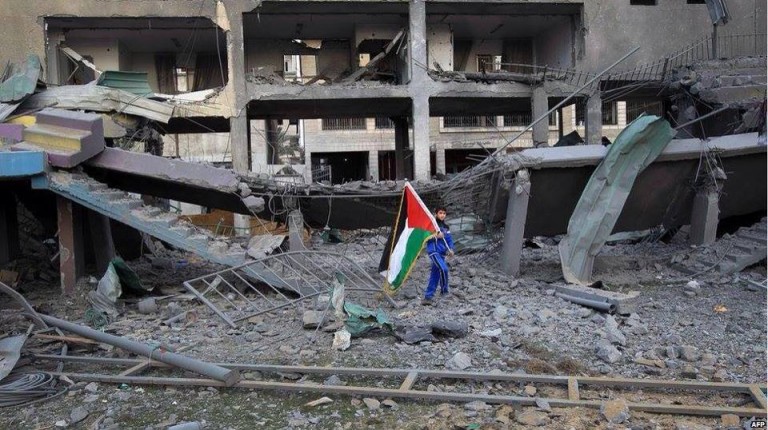 Amid efforts to reach a ceasefire to end hostilities, Gaza factions launched dozens of rockets into southern Israel, which responded by carrying out scores of air strikes into the strip.

The Palestinian Health Ministry said that three Palestinians have been killed: a pregnant woman, a toddler and a Hamas militant and six others were wounded in the Israeli attack. Meanwhile, several Israelis were injured due to Gazan rockets, according to Israeli media.

Israeli military said it struck 150 targets in Gaza, including a factory for tunnel components, in a response to firing massive attacks of 180 rockets which targeted Israel on Wednesday night.  The military asserted that the operations against Gaza are “ongoing.”

A Palestinian official told Reuters on Thursday that “factions of the resistance consider this round of escalation over,” adding “the continuation of calm depends on the behaviour of the occupation,” Reuters reported.

The United Nations’ (UN) Middle East envoy, Nikolay Mladenov expressed his concerns in a statement late on Wednesday, over the recent escalation between Gaza and Israel.

“Our collective efforts have prevented the situation from exploding until now. If current escalation isn’t contained immediately, situation can rapidly deteriorate with devastating consequences for all,” read the statement.

“For months I have been warning that the humanitarian, security and political crisis in Gaza risks a devastating conflict that nobody wants. The UN has engaged with Egypt and all concerned parties in an unprecedented effort to avoid such a development,” Mladenov added.

Most recently, a Hamas delegation arrived to Cairo on Wednesday, amid the recent escalation with Israel, to continue the talks over a ceasefire agreement, according to Al-Masry Al-Youm and state-owned newspaper Al-Ahram.

The recent escalation came after Hamas top officials visited Cairo last week to discuss with the Egyptian officials the possibility to reach a long-term ceasefire, which could last for seven years.

Last month, a ceasefire deal was reached, brokered by Egypt and the UN, but the violence continued.

The escalation also followed by several meetings held in Cairo between the long-time Palestinian factions Fatah and Hamas to restore the reconsolidation talks which were halted.

Last week, the two factions announced that they held several meetings with top Egyptian officials, including General Intelligence Service Chief Abbas Kamal, in Cairo to resume talks and discuss a new proposal presented by Egypt. However, no final decision has yet been reached.

The new Egyptian proposal aims to reach a reconciliation agreement between Hamas and Fatah and a long-term ceasefire deal to last for several years; it could extend to seven years.