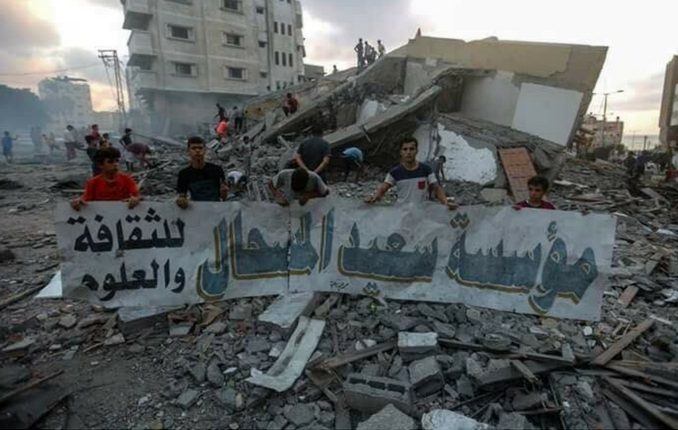 Israel on Thursday bombed a cultural building in Gaza, which contains a department that serves the Egyptian community living in the Strip, Palestinian and Israeli media reported.

The five-story building included theatres, cinemas, and children’s playgrounds, as well as a department for serving the Egyptian community in Gaza.

Israel argued in a statement that the building “served as the office of (Hamas) active unit members. A significant part of the unit’s members are also Hamas military operatives.”

However, the Egyptian authorities have not confirmed or denied reports of the building.

Palestinian journalists and artists took to Twitter to denounce the bombing of “one of the most prominent cultural centres in Gaza,” adding that “Israel wants to erase our culture, too.”

Since Wednesday, hostilities escalated between Israeli and Gazan factions. The Israeli military said it struck 150 targets in Gaza, including a factory for tunnel components, in response to a massive attack comprising of 180 rockets which targeted Israel on Wednesday night.

A ceasefire reportedly was reached on Friday between the Hamas movement and Israel, brokered by Egypt and the UN. However, neither Hamas nor Israel confirmed the reports.

At least three Palestinians have been killed by the Israeli airstrikes on Wednesday—a pregnant woman, a toddler, and a Hamas militant—and six others were wounded, according to Palestine’s Health Ministry.