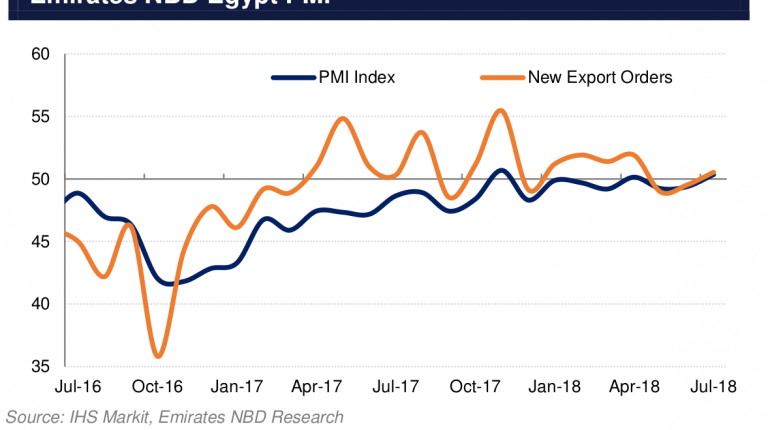 Egypt’s non-oil private sector conditions have bettered, hitting an eight-month high of 50.3 in July, boosted by an increase in exports, and tourism recovery, according to the latest purchasing managers’ index (PMI) issued by Emirates NBD on Sunday.

Egypt’s PMI exceeded the neutral 50 mark, which delineates contraction and expansion in the non-oil private sector for only the third time since 2015.

One of the drivers behind the witnessed improvement was the recovery in the tourism sector, as tourist arrivals recorded 8.3m in 2017, marking a 57.3% year-over-year increase, as cited by Emirates NBD survey respondents.

Moreover, the PMI index indicates that both new orders and export orders were positive, at 51.2 and 50.5 respectively.

According to Emirates NBD, the positive reading for the first month of the new fiscal year (FY) supports the bank’s view that the real GDP growth will strengthen in 2018/19, as there is a greater recovery in the private sector, supported by gradual monetary policy normalisation, improved political stability, and a rebound in the tourism sector.

However, output remained contractionary at 49.3, despite improving from 48.2 recorded in June.

Survey respondents believe that the contractionary reading is due to shortages in raw materials and increased costs.

The new energy subsidy cuts undertaken by the authorities led to an increase in electricity and petrol costs for factories by 42% and 50%, respectively, which in turn led to rise of input costs from 59.3 in June to 76.5 in August, the highest level since the last round of subsidy cuts at the start of the previous FY in July 2017.

Furthermore, as output prices rose from 54.2 to 57.0, the highest level since last August, some of these costs have been passed on, but firms’ margins remain under pressure.

Such effect can be evident in the employment index, which remained under the 50 mark for the 38th consecutive month; that being said, at 49.8 in July, this represented the slowest pace of job-shedding since mid-2015.

More importantly, firms’ output expectations remain positive at 63.7, with 82.0% of respondents expecting that output will be the same or higher in 12 months’ time. However, the number of firms believing that this is as good as it gets has risen sharply, with 18.0% now expecting weaker output next year compared to 9.3% in June.