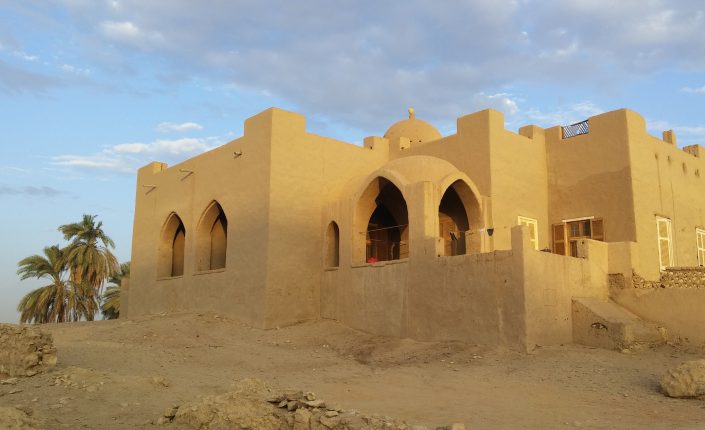 The house is located is Al-Nusrab village, Aswan and is considered one of the most unique designs when it comes to architecture and building methods.

Clark was born in 1841 in London. As an architect who was always passionate of Egypt’s ancient heritage, he moved to Egypt right after his retirement, where he worked as an Egyptologist for a number of archaeological sites, before he built his house and lived until he died in 1926. He was buried near his house.

Built in 1906, the house follows the commonly known masterpieces of the 20th century designs with mud-bricks and Egyptian limestone. Viewing the Nile corniche from above a hill, the house is also the last of the Egyptologist’s remaining designs after his designs were destroyed in Aswan.

According to a previous report of the Ministry of Antiquities, the house is described as an “architectural masterpiece, representing trends of the early 20th century, while infusing traditionalism and using simple local building materials.”

The high value of the house lies in its design and location. The house is located on a high hill of the Nile’s east bank, overviewing the Nile River to the west and some of the plantations of other residents and farmers to the east. The house is only one of the few rare homes carved with pottery, and it has ventilation and barrel vaults to reduce the effect of hot weather.

It also contains cathedral ceilings and domes capping the main areas. The mud bricks the house was built with leaves it always cool, with no need to use an air conditioning system, even in the middle of Aswan’s burning summer season.

Like many of the other historical sites in Egypt, the house is in major need of restoration.

Why a flood of new archaeological discoveries?

Resurrecting the past in Abu Sir

In Egypt, Sham El-Nessim is a lot more than coloring eggs