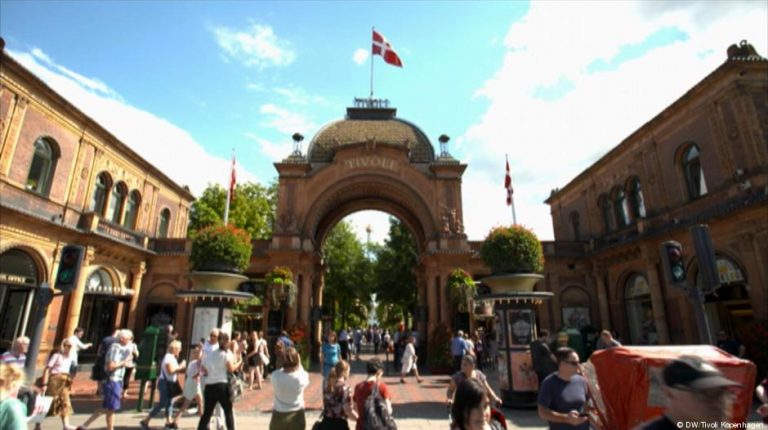 In the middle of Copenhagen’s city center, one of Europe’s most popular amusement parks, and the world’s second oldest, is celebrating its 175th birthday. Copenhagen’s Tivoli Gardens first opened in 1843.The Tivoli Gardens will be celebrating a lavish birthday party throughout 2018, with numerous events, concerts and parades. However, the highlight of the festivities will be on August 15th. At 10:45 pm things start to get romantic, when the park is illuminated, and around midnight there will be a huge birthday firework display.

With its combination of gardens, culture, amusement rides and restaurants, Tivoli is an institution in Copenhagen and has become an integral part of the cityscape. Exotic countries and imaginative fairy tales come to life in the park, while the gardens beckon you to linger. There are also 23 rides, from the modern Star Flyer to the historic wooden roller coaster, as well as 37 restaurants and numerous stages. During the summer season – from April to September – concerts, events and firework displays take place on weekends. Yuletide highlights include the romantic magic of Tivoli’s lights during during Advent, when its Christmas market takes place.

A model from the 2nd century

Tivoli is an amusement park that exudes the charm of the past. Its old-time atmosphere enchants people even after 175 years. Tivoli’s founder was a Danish entrepreneur, Georg Carstensen. In times of political unrest in Europe, he was able to persuade the then 31-year-old King Christian VIII to support his business idea, arguing that “when people are amusing themselves, they do not think about politics.” The king granted him the former military grounds along the city wall with permission to build an amusement park and pleasure gardens there. Tivoli Gardens opened on August 15, 1843.

The name refers to the Italian town of Tivoli, about 30 kilometers from Rome, where the emperor Hadrian had a summer residence, the Villa Adriana, built in around 120 AD,. Hadrian had miniatures recreated of the landscapes and buildings he had seen on his travels to Greece and Egypt. Even then there were music and theatre performances, and later centuries saw the addition of gardens with water features and fountains. Carstensen recognized an ingenious concept and implemented it in Copenhagen.

In the early 1950s, Walt Disney paid several visits to Tivoli Gardens in Copenhagen. The special atmosphere provided him with inspiration for his own theme parks. He took many ideas with him before eventually opening the original Disneyland in Anaheim, California, in 1955. Disney was fascinated by the mixture of lush flowers, lighting, nostalgia and romance, which he wanted to incorporate into his own park.

In honor of the 175th anniversary in 2018 of the Tivoli in Copenhagen, Walt Disney World is providing its own parade car for the big anniversary procession in the Danish theme park. The parade is more than 100 meters long. Until September it marches through the park every day except Fridays.

In honor of Tivoli’s 175th birthday in 2018 , Walt Disney World has provided its own float for the big anniversary parade in the Danish theme park. The parade through the park is more than 100 meters long and takes place every day except Friday until September.

Around four and a half million people flock to Tivoli every year. The most-visited amusement park in Europe is Disneyland Paris, with over 10 million guests a year, followed by Europa-Park Rust (Germany), with some five million visitors a year.