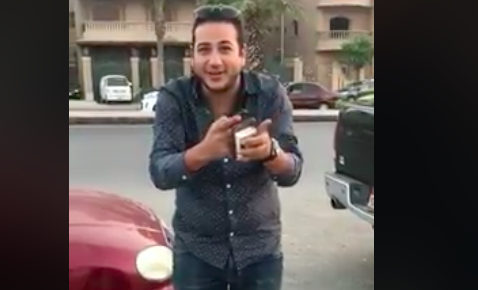 A viral video featuring a young Egyptian man approaching a woman in one of the Fifth Settlement streets in New Cairo has sparked a sharp division over the definition of sexual harassment over whether there is a difference between what is called flirtation and harassment.

The woman published on Tuesday a video she filmed, while she was standing in the street, as one of the men passing through stopped and “offered her a coffee.” She wrote “is this really happening in the Fifth Settlement district!”

The video rapidly went viral on Facebook, receiving thousands of comments and shares. Some people  attacked her for posting the video and documenting the event, accusing her of attracting attention over a “situation not worth this hassle,” while others, mostly of women, supported her move.

The same woman published another video featuring another man at the same spot. The video showed this second man sitting in his car and saying, “Come in and ride with us.” He left his car and stood in front of her and when he realized he was being filmed, he left. The woman has not been filmed in both videos she posted on her timeline.

On a daily basis, Egyptian women and girls are facing distinct forms of sexual violence in the streets of Egypt, public and private places, transportation and workplaces. It could be verbal or physical harassment, and sometimes rape. Women are usually blamed by society for being subjected to such acts. They are accused of “provoking” men by their outfits or actions.

A report issued by the Thomson Reuters Foundation on October last year showed that Cairo is the world’s most dangerous megacity for women. While an additional report by the Brazilan-based organisation ‘Instituto Promundo’ revealed that 64% of men admitted to sexually harassing women in the streets of Egypt. The forms of harassment ranged from ogling, stalking and sometimes rape.

Meanwhile, an earlier study by the United Nations in 2013 showed that 99.3% of Egyptian women surveyed have been subjected to sexual harassment in the streets.

The man who was featured in the viral video has received huge support from his peers. He published a video to explain what happened from his point of view. “I believe I did not make any mistakes,” he said, adding, “when she (the woman who accused him of harassment) refused (my request) I offered my apologies and left. I did not bother her nor did I do something inappropriate.”

He moved on to say, “I asked her for a coffee because she was standing in the street and I didn’t want anyone to bother her,” he added, “(her appearance) was really provocative. Therefore, I offered my request.”

Moreover, he believes that the situation “took more attention than it really deserved. I don’t think my behaviour in this situation could be considered as a harassment.”

“I believe that what happened is a clear connection between two different cultures, the western and the eastern of sexual harassment and picking up, which both see women as targets for men,” Shouhdy Yousef, a journalist told Daily News Egypt on Wednesday.

Yousef explained, “in the western culture we can argue that the norm is that men are the ones responsible for picking up women, which might bother women, while in the eastern context men feel superior to invade women’s privacy either physically or verbally.”

“This is how the man featured in the video justified his action when he said that he got to know many women of western backgrounds and what he did is so normal. He accused the women who filmed him of overexaggerating,” Yousef concluded.

Similarly, Nada Deyaa a cultural journalist said that the situation is a “clear act of harassment.”

Nada further said, “yes he did not say something related to harassment or use inappropriate words,” she said, adding “but his attitude in the video he posted to justify his actions is just an attempt to portrait the woman as a ‘slut’.”

“Additionally,” Nada continued, “he is now reposting her photos to justify his behaviour and to convince people that she deserved to be bothered. but the truth is he is just a harasser.”

However, Nada Gaber, a line producer at a media production company, disagreed that what happened, as she saw in the video, is sexual harassment.

“I did not witness the situation in person to fully comprehend what happened, however, what I saw in the video was that there is a man offering a coffee for a woman and when she expressed her dissatisfaction he apologized and walked away,” Gaber said.

Gaber added that the woman “overreacted to this situation,” elaborating, “it is not a harassment. It would be if he insisted or continued bothering her in the street.”

Last year, Egypt’s Parliament approved a draft law pushing tougher penalties on sexual harassment. It imposes jail terms of one year instead of jailing for just six months. it also imposes fines of EGP 5,000 and no more than EGP 10,000 of those who are accused and founded guilty of committing sexual harassment.