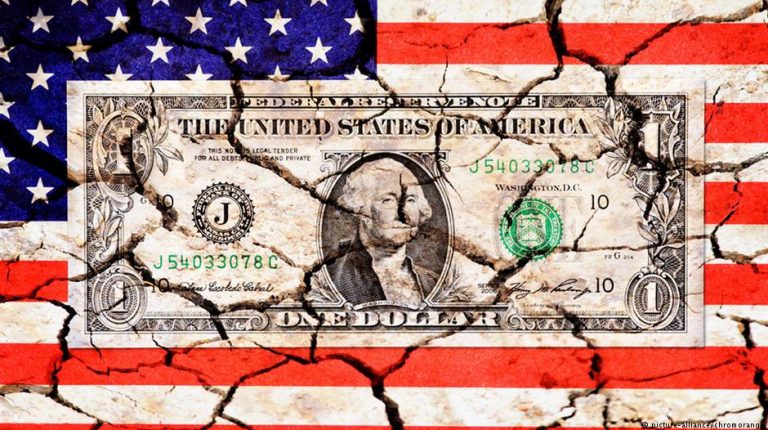 Tumbling emerging market currencies, including the Russian ruble, have caused Moscow to publicly wish for the “demise” of the greenback from global finance. Lars Halter examines how realistic such a wish actually is?If the stability of a currency is entirely linked to the confidence in the issuer of the currency, then it does not look good for the US dollar. In Washington, US President Donald Trump appears to be busy fighting against the rest of the world.

His administration has kick-started a fierce trade conflict with China and other countries by slapping tariffs and engaging in protectionist rhetoric.

In recent weeks, Trump has also picked up quarrels with Russia and Turkey. But the two are beating back by hitting Washington where it hurts. Both Moscow and Ankara are questioning the global role of the US dollar.

The global advance of the American currency began on February 14, 1945, on the USS Quincy, which was anchored in the Great Bitter Lake, near the Suez Canal in Egypt. In the belly of the cruiser, armed with anti-aircraft guns, a reception room had been set up: a few hastily arranged armchairs and tables on an oriental rug, in addition to the stars and stripes.

The steel walls of the mighty Navy ship were seen in the background.

Only a handful of people, including then US President Franklin D. Roosevelt and Saudi King Ibn Saud, were present. During their talks, Roosevelt promised military protection to his Saudi guest in exchange for secure access to Saudi oil and settling oil sales in dollars.

The deal meant that in just over a decade after the US effectively abandoned the gold standard in 1933, the greenback was once again tied to a commodity: this time it was black gold (oil).

Despite periodic tensions in US-Saudi relations, the pact has survived. And as demand for oil rose rapidly in the subsequent decades, the demand for US dollar also climbed. An increasing number of cross-border transactions began to be settled in the American currency.

The US dollar also plays a crucial role in forex transactions, with the currency accounting for 85 percent of the international currency exchange.

The US Federal Reserve has always supported the dollar’s role as the leader of the world’s currencies and provided sufficient liquidity, which has been a factor in ensuring its dominance.

The dollar’s liquidity makes it appealing for investors, who came to regard it as a safe haven — after all, the currency can be traded quickly.

This can sometimes trigger ugly situations: for instance, when investors sense economic trouble, they rush toward the dollar, even though the biggest threats to the global economy stem from the US.

This was the case for the most part during the 2007-08 financial crisis, or even during regular standoffs in the US Congress over the debt ceiling.

Economist Barry Eichengreen describes it as an “outrageous privilege” for the US. And yet he sees no alternative. That’s because the two main potential rivals to the dollar, the euro and the Chinese renminbi, have problems of their own. Eichengreen said the euro is a currency without a state, and the renminbi is a currency with too much state.

In other words, the expert explained, if push comes to shove, there will not be any national government to back up the euro and ensure monetary and financial stability. The Chinese currency, meanwhile, is controlled by the political leadership in Beijing and not by market forces.

It’s difficult to find any consistency when it comes to Trump’s rhetoric vis-a-vis currencies. He doesn’t shy away from accusing other countries, particularly China, of currency manipulation. But then, with his tweets, he puts pressure on the Fed to follow his recommendations on monetary policy.

Although the US central bank has so far been pursuing a steady course, the White House’s recommendations and demands about interest and exchange rates create uncertainty as to whether one can always rely on the political neutrality of the Fed.

Furthermore, no one wants to bet on Trump’s economic policies. His actions too often contradict his rhetoric: he speaks of large trade agreements, but has so far only withdrawn the US from them. None of his promised new deals has materialized. A trade dispute with China, uncertainty with regard to his dealings with Russia and a dispute now with Turkey, which is causing a plunge in the value of the lira. In the current economic climate, the dollar doesn’t seem to be a safe bet.

Against this backdrop, the question remains: which currency in future could give the dollar a run for its money?

Russia and Turkey have announced that they want to return to national currencies in international trade — they want to avoid the detour via the dollar.

If other countries agree, the dollar could become less dominant in global trade in future, say some observers. Still, the US currency will likely remain the strongest individual national currency as long as the US enjoys greater investor confidence than that enjoyed by other countries.