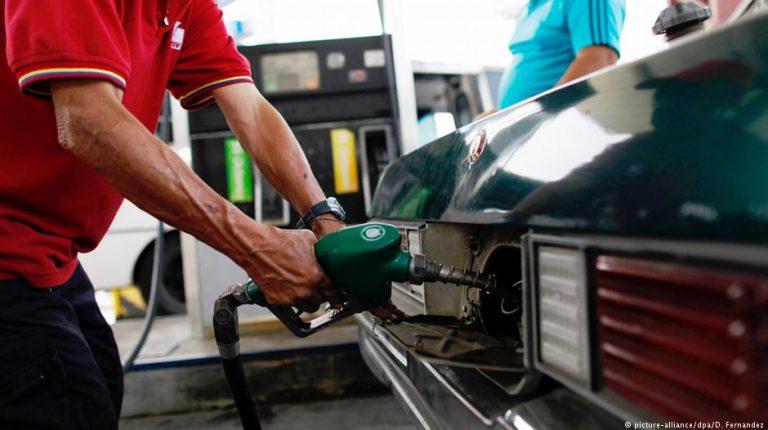 Venezuela is in the middle of an economic meltdown, facing chronic inflation and an acute shortage of essential goods. The government wants to tackle the situation by raising fuel prices. But that could prove tricky.”To say that we are giving away gas is still putting it too friendly; we are actually paying to throw it away,” Venezuelan President Nicolas Maduro recently said during the Venezuelan Socialist Party’s (PSUV) congress.

At present, it is theoretically possible on the Venezuelan black market to buy nearly 4.5 million liters of gasoline for the equivalent of $1. Maduro has now announced a sharp increase in the price of gasoline.

“Gasoline must be sold at international prices to stop smuggling to Colombia and the Caribbean,” he said in a recent televised speech. He stressed that the smuggling amounts to a net loss for the country of $18 billion (15.8 billion euros) per year.

Read more: How Venezuela gets plundered

Venezuela has for years heavily subsidized petrol. This has led to a situation where gasoline is practically given away in the country, meaning a single liter of gasoline costs a bolivar, which is next to nothing.

But the country has been confronting a severe economic crisis and hyperinflation in recent months. The International Monetary Fund (IMF) expects inflation to hit as high as a million percent this year. Venezuela’s total economic output, meanwhile, could shrink by 18 percent.

Raising gasoline prices, however, remains tricky. Giving away gasoline for almost free of cost is not something that was introduced during the era of former leader Hugo Chavez, but in fact has a long history in the oil-rich nation.

The notion of almost free gasoline as their basic right has long been etched into the collective psyche of Venezuelans.

In 1989, to comply with an IMF structural adjustment plan, the government of then President Carlos Andres Perez approved an increase in the price of gasoline. A violent revolt ensued that went down in history as “Caracazo.”

Since then, every Venezuelan government has thought twice when it comes to increasing prices.

The increase in gasoline prices announced by Maduro is expected to be phased in over a span of two years — and will not affect everyone equally.

“Anyone who does not respond to the call for this census, who does not wish to participate in the direct subsidy, will have to pay for gasoline at the international rate,” Maduro said Monday without specifying when this rate would kick in.

The Carnet de la Patria is a voluntary identity document that is valid alongside the national identity card and was introduced by the Maduro government in January 2017, with the aim of directing state social benefits.

According to the government, just under 17 of Venezuela’s 30 million people have such a carnet. The opposition has denounced it as a tool for controlling people.

Luis Vicente Leon, an expert on the Venezuelan economy at the consultancy Econalitica, says the government’s move to curb cheap gas is “predictable.” But Maduro’s decision to maintain the subsidy to those who possess a Carnet de la Patria is an example of “discriminatory populism,” the economist tweeted.

Leon believes Maduro’s aim with this move is to increase government revenue. The retention of subsidies for the holders of the carnet is “intended to reduce the political costs of the measure.”

In the wake of food and medicine shortages and public service paralysis, Maduro has recently acknowledged the failure of the government’s economic model. “The production models we’ve tried so far have failed and the responsibility is ours, mine and yours,” Maduro admitted.

The gasoline price increase is therefore part of a government plan to revitalize the economy. It will come into effect on August 20. Then there will also be a new currency.

The currently circulating bolivar fuerte (strong bolívar) will be replaced by the bolivar soberano (sovereign bolívar). The new paper money will have five zeroes less. During the transition phase, the two currencies will remain in circulation for “as long as necessary.” Maduro has assured the public that the Venezuelan central bank has sufficient reserves to execute the currency conversion.

Furthermore, the government has loosened the tight currency controls it first put in place 15 years ago, in a bid to attract foreign investment and ease the four-year recession that has led to economic collapse.

The new currency, bolivar soberano, will in future be linked to the government’s cryptocurrency Petro. Starting from Monday, the state oil company PdVSA will also carry out all its operations in Petro; prices and wages should also be based on it.

This will lead to a “substantial improvement in workers’ incomes,” Maduro assured. So far, the government’s moves to increase the minimum wage — already three times this year alone — have proved to be of little benefit as hyperinflation has rendered them useless in an instant.