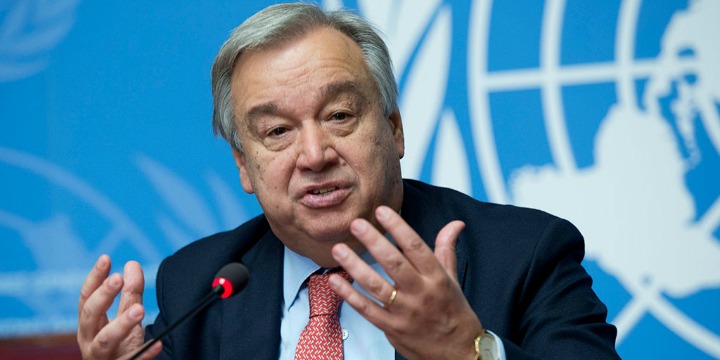 The UN Secretary-General Antonio Guterres proposed in a report on Friday, four options that he believes it could help in improving the life of Palestinian civilians and boosting the protection of Palestinians in Israeli-occupied territories.

The 14-page report came after a request from the UN general assembly as a response of a UN resolution that was adopted in May this year condemning the Israeli abuses towards the Palestinian people, as well as firing rockets from Gaza into Israel so that Israel opposed the resolution as it did not mention Hamas with condemnation. Hamas is ruling Gaza.

Options mentioned in the report include sending UN troops, monitors, and unarmed observers to deploying a military or police force under UN mandate, in addition to increasing the UN humanitarian and development aid to the Palestinians to ensure the well-being of the population.

Despite the four proposals, Guterres did not set any recommendations for applying those four options.

“The combination of prolonged military occupation, constant security threats, weak political institutions, and a deadlocked peace process provides for a protection challenge that is highly complex politically, legally, and practically,” he wrote in the report, adding that “the best way to ensure the safety and protection of the Palestinian civilian population is still the negotiation of a comprehensive, just, and final settlement of the Arab-Israeli conflict.”

In June, the United Nations’ General Assembly agreed on a proposal for providing an international protection for the Palestinian people in the occupied territories, asking Guterres to recommend an “international protection mechanism”. The meeting also condemned the Israeli excessive use of power against Palestinian civilians. Additionally, 120 countries voted in favour for the Turkish-Algerian proposal, while eight countries rejected it, and 45 others abstained. Kuwait has presented a similar proposal in the UN Security Council, which consists of 15 countries, but the US vetoed the resolution.