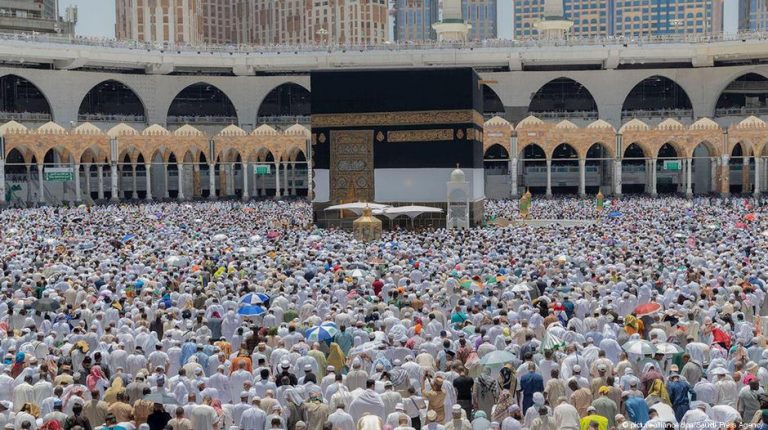 The six-day Muslim pilgrimage known as the hajj will welcome 1.6 million Muslims as relations between Qatar and Saudi Arabia remain tense. Many Egyptians have been unable to afford the journey as the economy splutters.Qatar has accused Saudi Arabia of blocking its citizens from attending this year’s hajj because of the ongoing diplomatic feud. The Saudi government has denied the charge, saying Qataris are still traveling to Mecca.

A quota system entitled about 1,200 Qataris to attend this year’s ritual ceremony but Qatar said it has been impossible for its citizens to get permits. It blames the ongoing diplomatic dispute with its Gulf neighbors — Saudi Arabia, the United Arab Emirates, Bahrain and Egypt.

“There is no chance this year for Qatari citizens and residents to travel for hajj,” the committee’s Abdullah al-Kaabi said. “Registration of pilgrims from the State of Qatar remains closed, and residents of Qatar cannot be granted visas as there are no diplomatic missions.”

A Saudi official denied the allegation and put the blame on Qatar, saying they were the ones who had blocked access to the registration links.

A group of Qatari pilgrims have arrived in Mecca, according to an official at Saudi Arabia’s hajj ministry, although he didn’t say how many had arrived or if they traveled directly from Qatar. Last year more than 1,600 Qatari pilgrims attended the hajj, he said

“Last year we lost a lot of money as the crisis started after we had booked everything in Mecca and Medina and we had to pay people back,” said one travel agency manager in Doha who didn’t want to be named. “This year, nobody is really trying as people have understood there is no way to go there in these circumstances.”

Skyrocketing prices of fuel and electricity have hit Egyptians hard, forcing many to indefinitely delay travel plans to the annual hajj.

Mahmoud Aouni, a 47-year-old youth ministry employee, has always wanted to make the pilgrimage to Mecca but now wonders if he’ll ever be able to afford it.

“They say charity begins at home,” he said. “In the current economic climate, that’s where it stays.”

Last year 80,000 Egyptians journeyed to the hajj but officials say they are looking at a 20 percent drop-off this year, with only 64,000 expected to attend.

“No one can fork out enough for religious obligations,” Aouni said. “How can I undertake the hajj when I can barely afford to run a household?”

“Before 2010, five or six of my neighbors would go each year,” he added. “Now, it’s one person from the neighborhood every three or four years.”