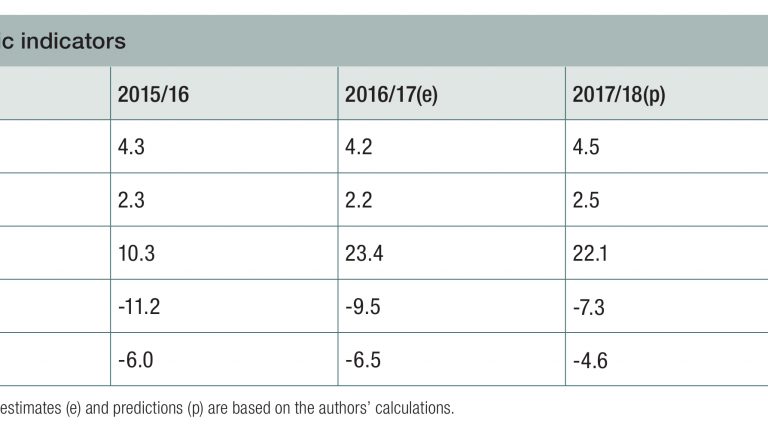 The construction and energy sectors are the main engines of growth on the supply side, this positive performance reflects the efforts made by the Egyptian Government to achieve fiscal consolidation and improve the business environment, through a home-grown reform programme backed by the International Monetary Fund (IMF), the AfDB, and the Word Bank (WB).

However, high inflation continue to be the main constraint to growth, because it affects the most vulnerable in the population as well as returns on investment, since the real interest rate may be negative. Indeed, inflation rose to 23.4% in FY 2016/17 from 10.3% in FY 2015/16 and will remain around 22.1% in FY 2017/18. This evolution is a consequence of the depreciation of the Egyptian Pound (EGP) from EGP 8.8 per dollar in October 2016 to EGP 15.8 in November 2016.

Consequently, the Central Bank of Egypt adopted a tight monetary policy in an effort to support the pound and reduce inflation, through a cumulative increase in interest rates by 700 basis points (bp) to combat inflation. Afterwards, the Central Bank of Egypt (CBE) lowered the key rates by 100 bp in February 2018 followed by another reduction of 100 bp in March 2018 to support economic growth and lending to the private sector.

According to the report, inflation is expected to fall to 13.4% in FY 2018/19. Then monetary policy will loosen gradually from 2018 with the decline in inflation.

Over the past six years, Egypt has accumulated a significant stock of debt, mainly domestic. Debt increased from 65% of the GDP in FY 2011/12 to 91.1% in FY 2016/17, reflecting the fiscal deficit financing needs, the report indicates.

Total government’s debt (domestic and external) increased to 106% of the GDP at end of March 2017. Of this, domestic budget sector debt increased to 89% of the GDP—compared to 95% of the GDP by the end of June 2016. The rise was mainly due to financing the budget deficit, in addition to the impact of settling some expenditure arrears of budget sector entities.

In March 2018, the government announced an ambitious privatization programme for 23 SOEs, which will either sell their shares by initial public offering (IPO) or increase their free-floating shares on the local stock exchange.

For the first time in eight years the unemployment rate fell (to 10.6%) in the first quarter of 2018.

The report cites, that recent data from Egypt’s Ministry of Finance on infrastructure investment indicated that, between FY 2013/14 and FY 2016/17, nearly $55bn has been spent on infrastructure and services in Egypt’s governorates. From this amount, 44% was spent on energy projects (mainly oil), through self-financing or loans, 18% on housing, 14% on transportation, 11% on electricity, and 2.9%, 2.3% on drainage and water consecutively.