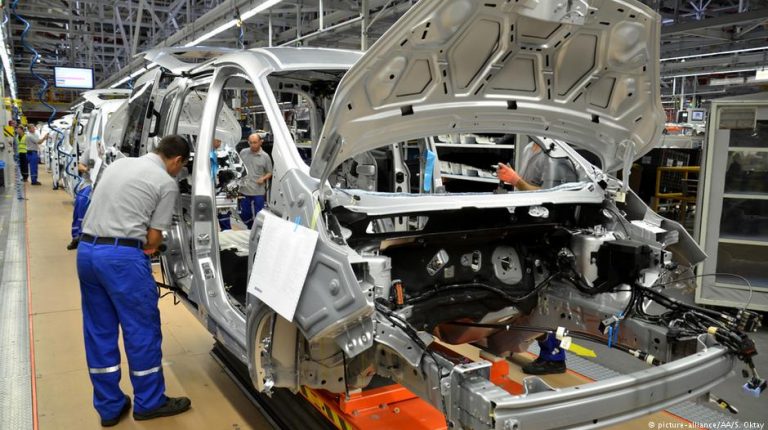 Germany is not planning financial aid to help Turkey deal with its currency crisis, the Berlin government says. Opportunities may arise to buy indebted Turkish firms, but for now German business leaders are indifferent.Berlin and Brussels on Monday played down a suggestion that Germany and the European Union (EU) should offer aid to Turkey, to help offset the effects of the Lira crisis.

The idea was mooted by Andrea Nahles, the leader of Germany’s center-left Social Democrats (SPD), who told the German Funke media group at the weekend that it was “in everyone’s interest that Turkey remains economically stable, and that the current turbulence involving its currency is stemmed.”

Nahles said that despite political tensions between Germany and Turkish President Recep Tayyip Erdogan, “a situation might arise where Germany needs to help.”

The SPD leader was responding to worsening economic conditions in Turkey, where many of its deeply-indebted private firms are struggling to repay foreign loans due to a weakening currency. The Turkish Lira has plummeted nearly 40 percent against the US dollar since the start of the year.

Read more:Turkish economic shadow looms over Europe and beyond

‘Not on the agenda’

Nahles’ suggestion was quickly rejected Chancellor Angela Merkel’s spokesman, who said on Monday that financial aid was “not on the government’s agenda at the moment.”

Also rebuffing the idea, the EU’s budget commissioner, Günther Oettinger, insisted “there is a need first and foremost for action in Ankara, not in Berlin, and not in Brussels.”

Oettinger said if the Turkish government needed financial assistance, it would have to go to the International Monetary Fund (IMF).

Turkey’s corporate debt is only partly to blame for a weakening currency. Erdogan’s ongoing power grab has also spooked investors after he took aim at the country’s central bank, where the president can now appoint those who set interest rate policy.

Among many commenators calling for Erdogan to reverse his decision, Volker Treier, Deputy Chief Executive of the Association of German Chambers of Commerce and Industry (DIHK), believes that German companies would be more willing to support the stabilization of the Turkish economy in the event of an about-face.

“Their commitment, however, is very much dependent on Turkey´s willingness to provide certain framework conditions, including the Central Bank´s independence, and rule of law,” Treier told DW.

Germany is the second biggest foreign investor in Turkey. More than 6,500 companies with German equity are active in the Turkish market, and have built up a capital stock of more than €10 billion ($11.4 billion), DIHK figures suggest.

Michael Hüther, director of the Cologne-based German Economic Institute, said Erdogan’s interference had caused “a tremendous loss of confidence in the stability of the investment conditions in Turkey.”

He questioned whether financial aid from Germany would have real long-term economic benefits for Turkey.

Hüther disagreed with the notion that by not offering support now, Germany could be hurting the fortunes of its own businesses.

“If companies invest in emerging markets like Turkey, they should be aware that they have a higher risk than in Switzerland; they can’t then ask for government aid,” Hüther told DW.

The argument for financial support would be stronger if the effects of Turkey’s crisis spread to other countries, including Germany, he said.

Germany’s finance ministry on Monday did warn of the threat of contagion, in its monthly report on the state of the German economy.

“The economic developments in Turkey present a new, external economic risk,” it said, adding that the Lira crisis could compound other possible threats to Germany’s economic health — trade frictions with the United States, and Britain’s ongoing Brexit standoff.

While financial support to Ankara appears unlikely for now, German companies could benefit from the huge opportunities created by bankruptcy-threatened Turkish firms, as cynical as it may seem.

Having taken large corporate loans from international banks in foreign currencies, many companies are struggling to service their debt in the weakened Lira.

Fewer competitors in the Turkish market could lead to a boost in orders, while widespread insolvency could possibly be avoided by mergers and acquisitions led by German industry.

Even so, the German Economic Institute’s Hüther doesn’t think German companies are interested in bargain hunting or picking over the remains of once-profitable Turkish firms.

“It’s not a question of opportunity, or price, but more about the medium term perspective,” he told DW.

Unless German companies see a return to the “sound economic conditions” of recent years, they are unlikely to invest further, Hüther insisted.

DIHK’s Treier acknowledges that some companies benefit from times of crisis, and the Lira’s collapse could mean a massive reduction in operating costs.

Even so, he agreed that for most export-oriented German businesses, the “current instability and unpredictability … is a major problem that undermines the realization of potentially attractive business opportunities.”