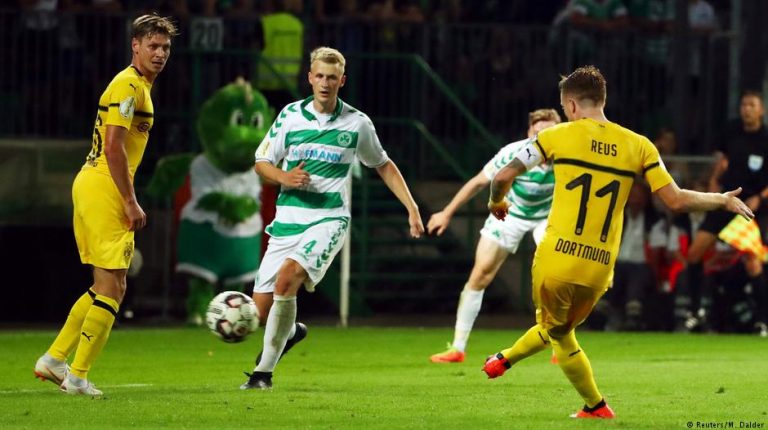 BVB have just barely advanced to the second round of the German Cup, and the striker question lingers. After Pierre-Emerick Aubameyang’s departure came Michy Batshuayi, but now what? Perhaps they already have a solution.After a busy summer of change, the only question left surrounding Borussia Dortmund at the moment is whether they will shell out to sign a striker. Despite the rumors about Liverpool’s Divock Origi and Barcelona’s Paco Alcacer, there’s certainly a case to be made that Marco Reus could be the answer.

Reus spent most of his time under Lucien Favre when both were at Gladbach in the role of deep-lying forward. Dropping deep to receive the ball and confuse central defenders, Reus also opened up space for his attacking teammates – and the system proved effective. Reus scored 19 and assisted on 10 in that position as Gladbach’s limited individual talent suddenly united and overachieved to finish fourth before he departed for Dortmund at the end of the 2011-12 season. The potential of Reus in that position for BVB is even more exciting.

Unlike at Gladbach, Reus is surrounded by far more superior talent. Marius Wolf has impressed, this season could be a breakout one for Jadon Sancho and Christian Pulisic is only getting better. And that’s before Maximilian Philipp, Shinji Kagawa, Mario Götze and Mahmoud Dahoud are even considered. The combination of this greater overall quality combined with Reus’ knowledge of Favre’s philosophy should be very encouraging for BVB fans.

While concerns about rustiness are valid – Reus was guilty of spurning quite a few chances before his late dramatic winner on Monday – they are only valid now. Fürth away in the German Cup first round was their first real game together. This group hasn’t even been together for two months. It will take time for the automatisms to click, the understanding to improve and for players like Reus to be sharper in front of goal. Looking back to the end of last season, Reus was sharper than he’d been in a long time. This team can only get better.

It’s unlikely Dortmund’s need for a striker is going to go away, but they only have 10 days left to act (the transfer window closes on August 31). Whether Alcacer or Origi or another name arrives, remains to be seen. Perhaps the pressure of the situation will force Dortmund’s hand and maybe Favre has a player in mind. But either way, Reus remains a genuine option up front. The 29-year-old is the face of the club, the captain and the emotional leader. With a World Cup summer and 124 minutes of tough cup football behind him, it seems fair to suggest that he could also can be the forward Borussia Dortmund have been looking for.